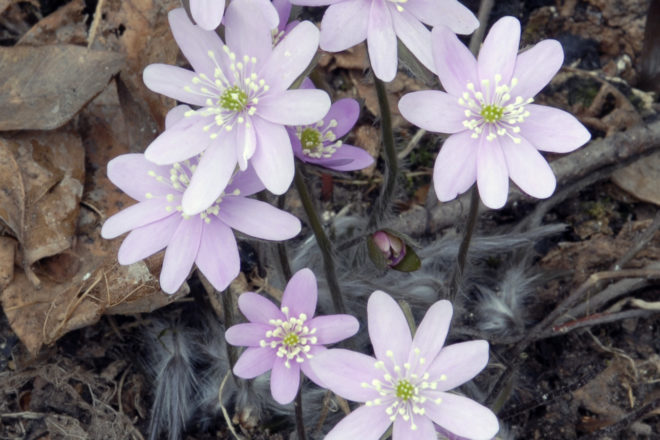 For a long time I suspected that some things, such as wildflowers only appear to get better and better each year as we grow older. For many years we have recorded, on a daily basis, the arrival dates and activities of birds and other wildlife, along with our observances of the general appearance of the flowering land around us.

I especially like wildflowers that, within a range of a mile or less, are known to have a blossoming period as long as six weeks. A wildflower that in some years may appear in bloom from late March well into the middle of May also seems to defy cold, rainy, even snowy April days. It’s the hepatica, a hardy native that is at its best on sunny days. 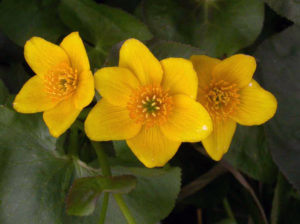 The marsh marigold is not a true marigold so we like to call it swamp cups. Photo by Roy Lukes.

The sequence of wildflower blossoming is bound to differ slightly from woods to woods, county to county, and will be affected by elevations of the growing site and nearness to cold “refrigerative” bodies of water, such as Lake Michigan.

The scientific genus and common name are the same, Hepatica. Even though Gray’s Manuel of Botany refers only to the trailing arbutus as mayflower, many people in this region think of hepatica when they mention mayflowers. Actually, if the month of its first blooming were important in its name, they could realistically be called aprilflowers.

Two species are listed in Gray’s Manual. Acutiloba (a-cue-ti-LOW-ba), having pointed leaf lobes and bracts, tends to be more western in the Midwest and favors dry to medium woods with limy soil. This species bears staminate (male) flowers on one plant and pistillate (female) on another. Acutiloba is the only species of hepatica growing by the hundreds in our woods.

The other species, americana, (a-mare-i-CAY-na), bears flowers of both sexes above the roots of each plant. They have rounded leaf lobes and bracts and are more likely to grow in acid soil. However, both do nicely on partially shaded slopes and in rocky terrain where the woods are rich in leaf mold.

Hepaticas are worthy of more praise and study. In fact its entire family, the Crowfoot (or Buttercup) family (alluding to the leaf shape), is one of unusual beauty. It includes more than 30 species of buttercups, meadow rue, anemone, clematis, delphinium, marsh marigold, columbine and baneberry. 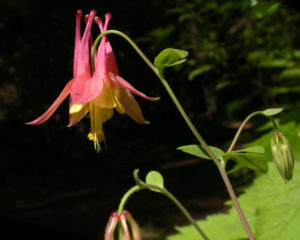 Years ago, when we lived in Baileys Harbor and would drive south on Highway 57 to the big city, we crossed Logan Creek south of Jacksonport. Along the swiftly flowing creek, west of the road, grew thousands of marsh marigolds hugging the marshy borders. Gradually large thickets of willow shrubs crowded out the beautiful golden flowers.

The name marigold refers to its use in medieval churches as a tribute to the Virgin Mary. It often carried names such as Mary Gold, water bubbles, polly blobs, May blobs and horse blobs. The word blob was frequently used many years ago in that one of the flower buds looks somewhat like a blister, a usually small amount of something thick and wet that does not have a regular shape — a blob.

What appear as petals to us are actually the plant’s sepals, usually five in number but as many as nine. Similar to buttercups, the marsh marigold’s sepals are quite shiny and concave in shape.

The scientific name of the marsh marigold is Caltha palustris. The word “Caltha” refers to a cup or chalice, while “palustris” refers to marshy or swampy conditions. Palustris most often is used to describe the habitat in which specific plants grow. Since this flower is not a true marigold we prefer to use the term “swamp cups” because of where they grow and alluding to the lovely cup-shape of the upturned golden sepals.

Depending upon where they are growing in Wisconsin, their time of blossoming can range from mid-April to early June. Apparently the blooming period is closely correlated with the water and soil temperature in which they grow.

In the 1930s a nationwide attempt was made to establish a national flower. Nominees ranged from the bright red cardinal flower and the columbine as well as the non-native chrysanthemum. All failed to impress enough people to make a choice and the move stalled. Well, eventually a choice was made and it was the rose.

I surely could have lived with the columbine and the fact that there are around 25 species in the United States would mean that most citizens, if not all, could find this exquisite plant growing naturally in their state. 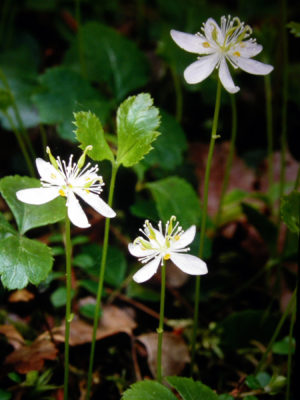 Goldthread flowers are quite small and low growing. Photo by Roy Lukes.

The species many of you may be familiar with, Aquilegia canadensis, is very common in Wisconsin, and fortunately has quite a long blossoming season. These intricately shaped downward facing blossoms, crimson to salmon pink on the outside and pale yellow on the inside, inhabit moist ledges, rich woods and sunlit openings and roadsides. They are dainty but rugged.

The Latin word, “columbinus,” meaning dove-like, refers to the resemblance of the five arched nectar spurs on a columbine flower to five doves in a ring around a dish. Another interpretation is that the nectar spurs appear like the talons of an eagle (“aquila” in Latin). Still another scholar claims the name is derived from “aqua,” meaning water, and “leger,” meaning to collect. Personally I prefer the dove interpretation, and so do the children and adults to whom I have told the story while admiring this showy flower.

The Canada anemone, Anemone canadensis, grows in moist thickets, meadows and even along roadsides. It can reach a height of more than two feet. The large white blossom is actually five petal-like sepals and is sometimes called windflower. It can be seen at the Ridges Sanctuary and Toft Point through the middle of June.

Buttercup flowers can bloom from spring through much of summer. Their shiny, deep yellow and slightly cupped petals give them their name. They are poisonous to eat by humans and cattle. The genus, Ranunculus, contains more than 200 species and plants frequently have the name of crowfoot as well as buttercup.

The Ridges Sanctuary is a good place to see the three-leaved goldthread, Coptis trifolia, var. groenlandica. It thrives in wetlands and can be seen near the edges of the swales at the bridge approaches. The goldthread is native to much of Canada and many parts of the northeastern United States and does well in coniferous habitats.

Its white sepals are often thought of as the flower when actually the true petals are yellow club-like structures and are actually smaller than the stamens. The goldthread name comes from its long, thin golden underground stem. Some cultures chewed it to cure canker sores and thus another name for it was canker-root. 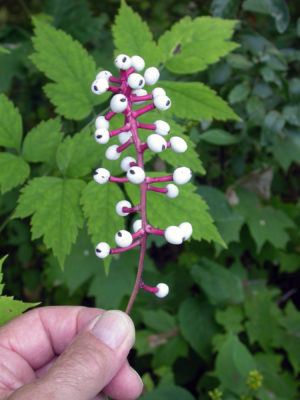 Here is the spike of doll’s eyes in autumn. Photo by Roy Lukes.

A plant that gets more attention in autumn than when blooming in spring is the white baneberry. Many people call this attractive plant doll’s eyes. The fruit is a four or five-inch long cluster of loosely spaced oval white berries, each with a dark purple or black spot on the end. The bold spot formed where the broad stigma was attached.

The story is that the berries resembled the old-fashioned china eyes that small children so frequently managed to gouge from their dolls’ heads, hence the name doll’s eyes.

Muenchner, in his poisonous plant book, tells about someone’s experience of consuming six of the white baneberries, which in turn produced increased pulse, dizziness, burning in the stomach, and colicky pains. The rootstalk is a violent purgative, irritant and emetic.

Occasionally one comes across the red baneberry, Actaea rubra, which has a more globular cluster of very shiny red berries supported on thin stems or pedicels. Frequently the white variety, referred to as neglecta, is more abundant than the red. These berries have smaller black dots and also the thin pedicels of the red species.

One of the few animals reputed to eat the berries of the doll’s eyes is the ruffed grouse. I trust that the grouse, during its wanderings, will inadvertently scatter the seeds of the doll’s eyes (via the bird’s droppings), which will grow and emblazon the forest with their handsome red and white ornaments.