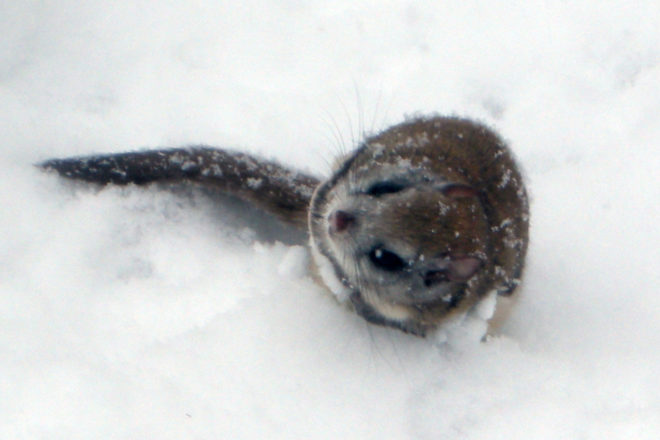 The flying squirrel that I found in my yard cocked its head to look at me. You can see how flat its tail is. Photos by Charlotte Lukes.

The morning of Tuesday, Jan. 16 dawned a bright clear 5 degrees. Everything in the yard and woods was covered in pure white after the 17 inches of snow that fell from late Sunday night to the wee hours of Tuesday morning.

I went out and shoveled the path to the bird feeders, cleaned off the snow and scattered seeds for the birds. It was nearly 8 am as I was finishing breakfast when I saw the first gray squirrel jumping through the higher tree branches to come and dine on cracked corn. I laughed as it took a flying leap from a large basswood trunk, landed in the center of the driveway and disappeared in the deep snow.

During the height of the storm on Monday I saw a small squirrel jumping in the snow below the suet feeder. I thought it was the red squirrel that appeared in the yard on Sunday, but it looked different. A few minutes later, when I shoveled the path under the feeders, I scooped up this small squirrel, which was hidden, and it clung to the edge of the shovel. It was not a red squirrel but a flying squirrel.

Having owned our property for more than 40 years and living here more than 35, this was the first flying squirrel I ever saw on our land. Roy and I had several delightful experiences with them when we visited friends who had spotlights aimed at their feeders at night.

Roy was invited by a couple living northwest of Green Bay to stay with them for a weekend in autumn about 55 years ago. He had done bird-banding there on numerous occasions but this visit was for a different reason. They wanted to surprise Roy with their recent discovery. Something had been eating the cob corn during the night and they wanted to share their findings with Roy. I will tell you Roy’s story as he wrote it:

“My hosts had been tying an ear of corn to each end of a foot-and-a-half-long piece of wire. This, in turn, was fastened securely to a nail pounded into a tree at about six feet above the ground. Finally, after carefully checking the time, the moment had arrived. We went outdoors to the edge of the woods bordering their garden where the corn was tied to the trees. Instructions were simple. Stand perfectly still about three feet from the tree, facing it and not quite in front of the corn. Wait. Don’t budge or take your eyes off the tree or the corn. 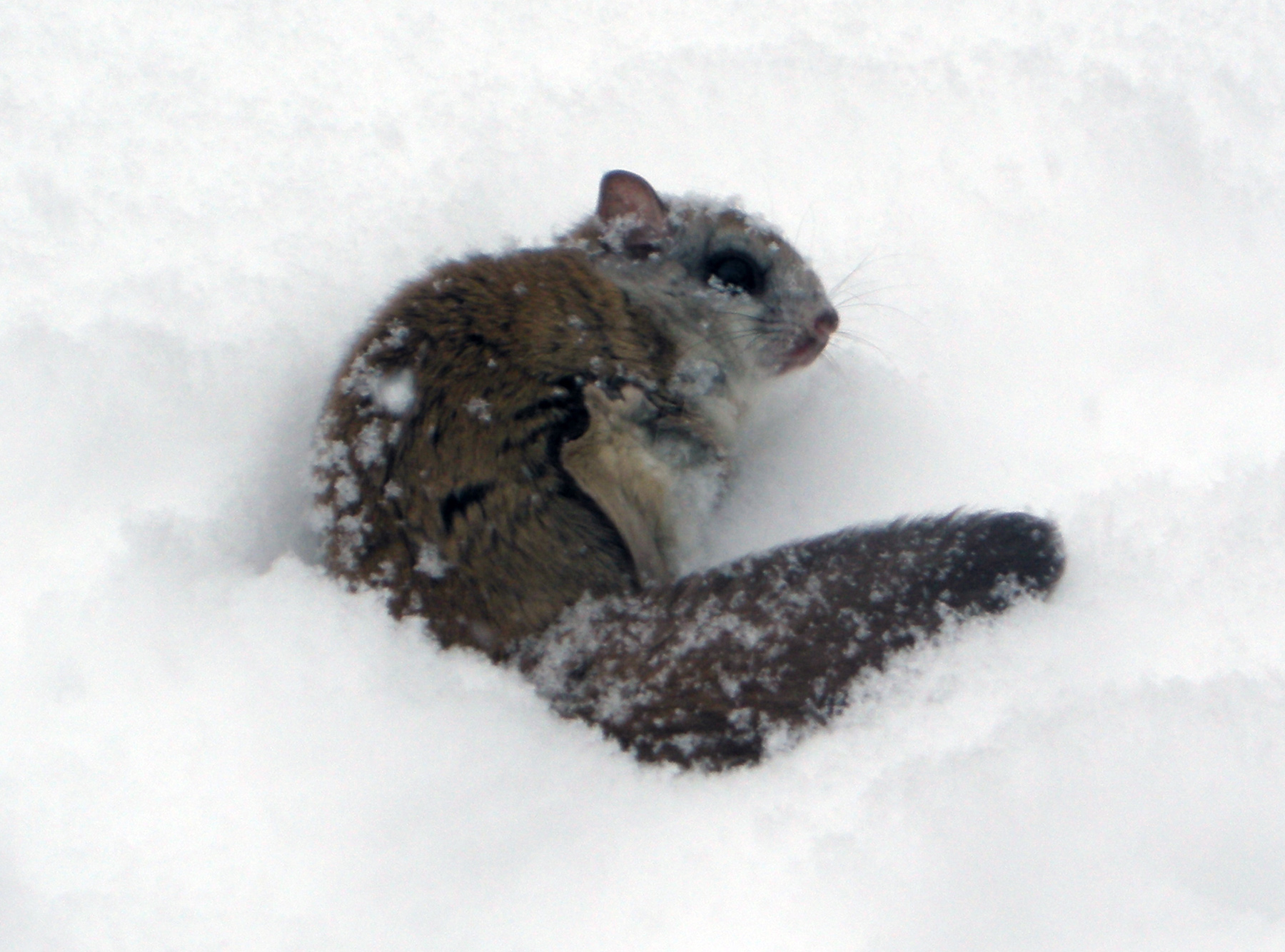 Another view of the squirrel shows the black edge and tan underside of its patagium, which it flares out to help him glide in its “flight.”

“Like silent little ghosts they came. One, two, three of them; flying squirrels! I should have known it all along. Up and down (mostly up, though) the maple trees they sped like greased lightning in their excitement over our standing next to their food.

“After watching these petite vivacious northern flying squirrels for several weekends we knew almost the exact minute and the precise direction from which they would arrive onto the maple tree. One of the greatest thrills was to watch them launch themselves outward from a high distant branch, perhaps 70 feet off the ground, reach outward with all four feet, thereby stretching the skin, called the patagium, between front and back legs. A jump from about 70 feet up would net them a beautiful silent glide of approximately 175 feet. Then, when they were about six feet from the tree, using their tail and patagium as rudders, they would turn upward in their gliding downward flight to land whisper-light on the trunk, head facing up.

“These sprightly, elusive, delicate creatures, protected by law in Wisconsin, are more common than we realize. The fact that they are nocturnal in their habits hides them from most people. There is no knowledge of them hibernating. In fact several of them will occupy the same winter cavity, perhaps a hollowed-out tree, to conserve precious body heat. Like other squirrels the warmer the winter weather happens to be, the more active their food finding becomes.

Frank King, DNR wildlife biologist, as a result of his research, found flying squirrels to be most active in hour to hour-and-a-half periods at 10:45 pm and 3:30 am. Although they can run up a tree with unbelievable speed they are slow runners on the ground, covering about 75 feet in 12 seconds.

“Dr. John Curtis, former well-known Wisconsin botanist, caught a flying squirrel in the attic of his home near the University Arboretum in Madison. They carefully toe-clipped the mischievous little scamp for possible future identification, then released it a mile from their home. Six days later they retrapped this squirrel in his attic!

“Their high-pitched squeaks and general ‘talkativeness’ as they search for food at night occasionally leads to their being caught by owls. I found a flying squirrel tail along one of the sanctuary trails a few years ago and have never held a fur object in my hand that was so feather-light and amazingly warm to the touch. Apparently the animal had been eaten by an owl.

“What a thrilling surprise my friends, my wife and I had a few nights ago after supper. We strolled outdoors to enjoy the mild Indian summer beauty of the late October full moon. This prompted me to set up the telescope. The full moon now rode high above the spruces to our east.

Suddenly one of our guests pointed up to the moonlit maple tree branches and exclaimed, “Is that a bird?” My first thought was not at this time of night. Then it dawned on me, a flying squirrel! Sure enough, there it was, enjoying one sugar maple bud after another. Five purely delighted human beings took turns admiring this six-ounce aerial acrobat, brilliantly backlighted by the moon, through the spotting scope.

“At times this agile entertainer hung upside-down as he stretched every one of his 10 to 12 inches of length (five being tail) in reaching for what perhaps were the very most tasty and tender buds, naturally at the tips and the thinnest and outermost twigs.

“The experts may attach little to no economic importance to the flying squirrel, but many people who have been so fortunate to observe their evening escapades would be reluctant to trade them for any other. Come the icy, sub-zero blasts of winter, our hearts will, in part, be outdoors with the flying squirrels reassuring them that they are admired, unknowingly, as few other animals are in our lives. Glide on, flying squirrels!”