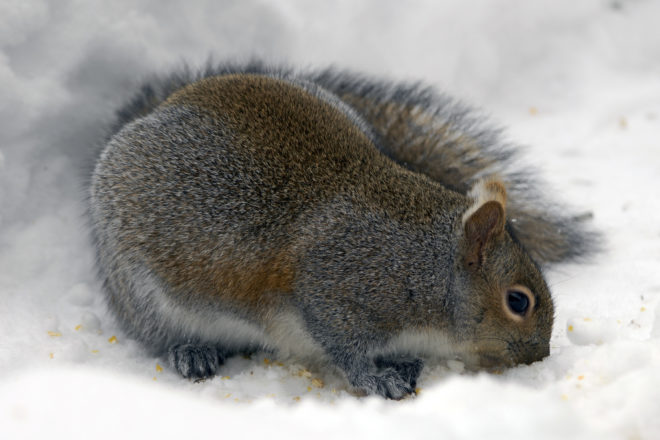 This gray squirrel eats cracked corn in the snow. Photos by Roy Lukes.

Every early morning under the bird feeders there is a congregation of gray squirrels. Lately the high number is seven and they seem to have their own “territory.” They will tolerate each other within about two feet, but if one inches closer then there is a quick fight to protect each creature’s food supply.

Years ago we used to scatter cracked corn in several spots along the driveway. That attracted the squirrels as well as crows, tree sparrows, juncos, wild turkeys, raccoons on mild winter nights and even a flock of 50 mallards one February. We learned that the mallards would follow a flock of crows in that harsh, deep-snow winter because they knew the corvids could find food when times were tough.

Now is what we call the “sniffing” season for squirrels, more so for grays than reds. Depending on how early or late they were born, the females are soon to come into heat. Yes, more and more male grays are gathering in the front yard from neighboring woods for something other than food! 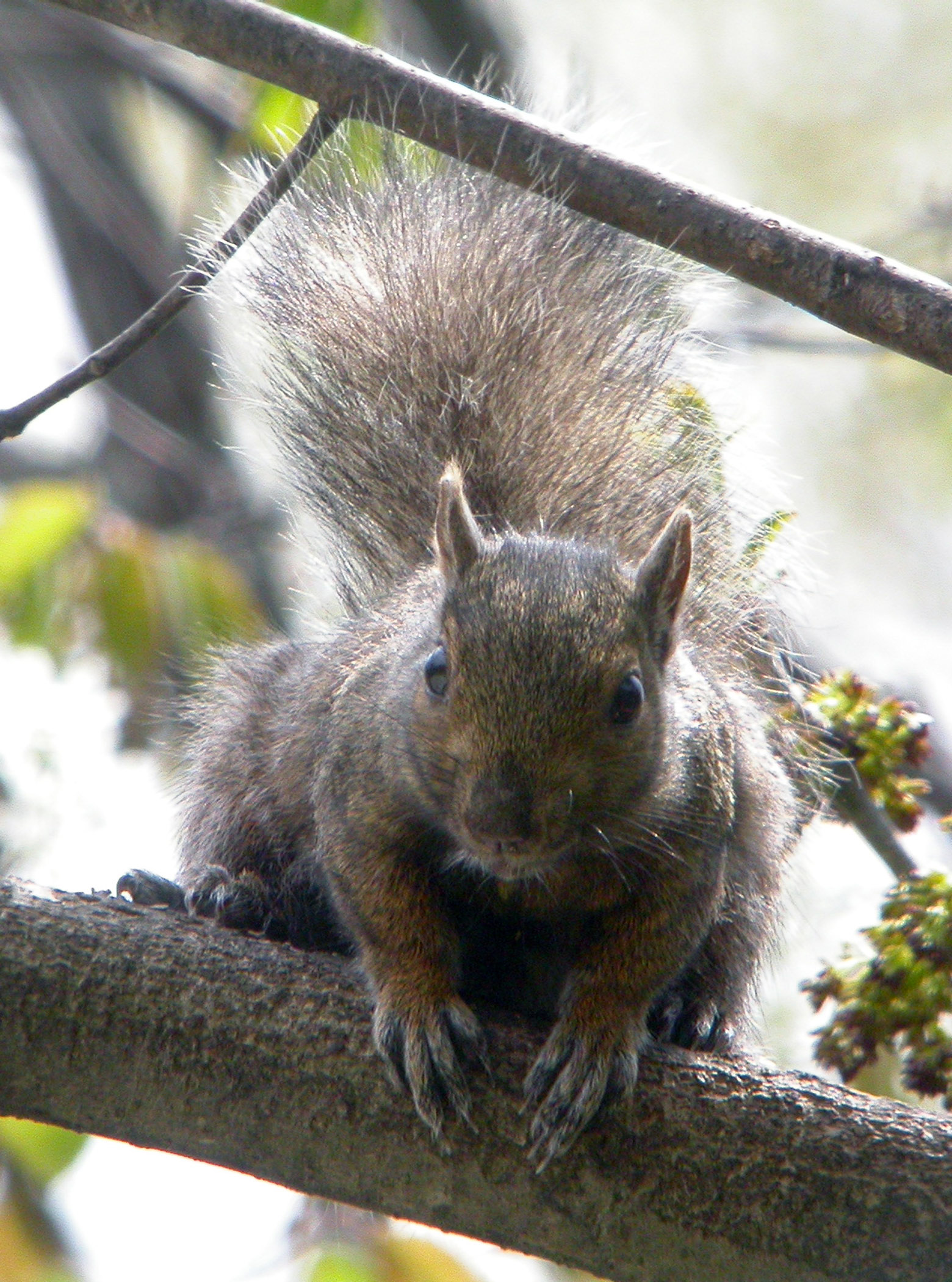 A gray squirrel gives an “I dare you” stare from an ash tree in the front yard.

A female will slowly raise her tail high above her back, prompting a male into immediate action. He lunges for her and she easily springs ahead and out of range. Now he carefully sniffs the ground where she had been sitting to see whether or not she is ready. It’s when the dizzying and daredevil chases occur in the maple trees above the feeders to the immediate front of where I sit that the action becomes so exciting to watch.

It is very possible that some of the gray squirrels in the front yard are at least 12 years old. They in turn may have produced upwards of 20 generations of squirrels. Little wonder the hawks and owls like these woods so much!

It is said that a gray squirrel seldom strays more than 1,000 feet from its nest and that about one pair to an acre is normal. There had been mornings back in the early 1990s that we counted as many as 14 of these large chisel-toothed rodents feasting in the front yard at the same time. Their number has certainly declined through the years.

Experts tell us that the eastern gray squirrel population of today is considerably below that of a couple centuries ago. Obviously the acreage of woods, their environment, has been mercilessly whittled at and decreased in size.

I read of two teams of six Kentuckians, 12 hunters in all, shooting 9,780 gray squirrels during a seven-day period in the 1840s. That amounts to about 116 squirrels per hunter per day. That’s what I call a high squirrel population!

With agriculture on the rise in Pennsylvania during the mid-1700s the treasurer of that state in 1749 paid out 8,000 pounds of sterling, bounty money for the killing of 643,000 gray squirrels. These crafty rodents and farming didn’t mix.

Wisconsin DNR rules allow statewide gray and fox squirrel hunting from mid-September to the end of January. The daily bag limit is five animals. There is no mention of red squirrels.

As more and more forests were cleared for farming there actually came a time during the early 1900s when it was thought that the eastern species of gray squirrel might become extinct. Today people of the British Isles would have a difficult time accepting that story. Gray squirrels introduced to several European countries years ago have now become serious pests, especially in England.

I can practically hear some of you saying, “And not only are they pests in England!” There must be a special human vocabulary (mostly unprintable) used when chasing gray squirrels off bird feeders. Obviously feeding birds will also increase the gray squirrel population on your property. 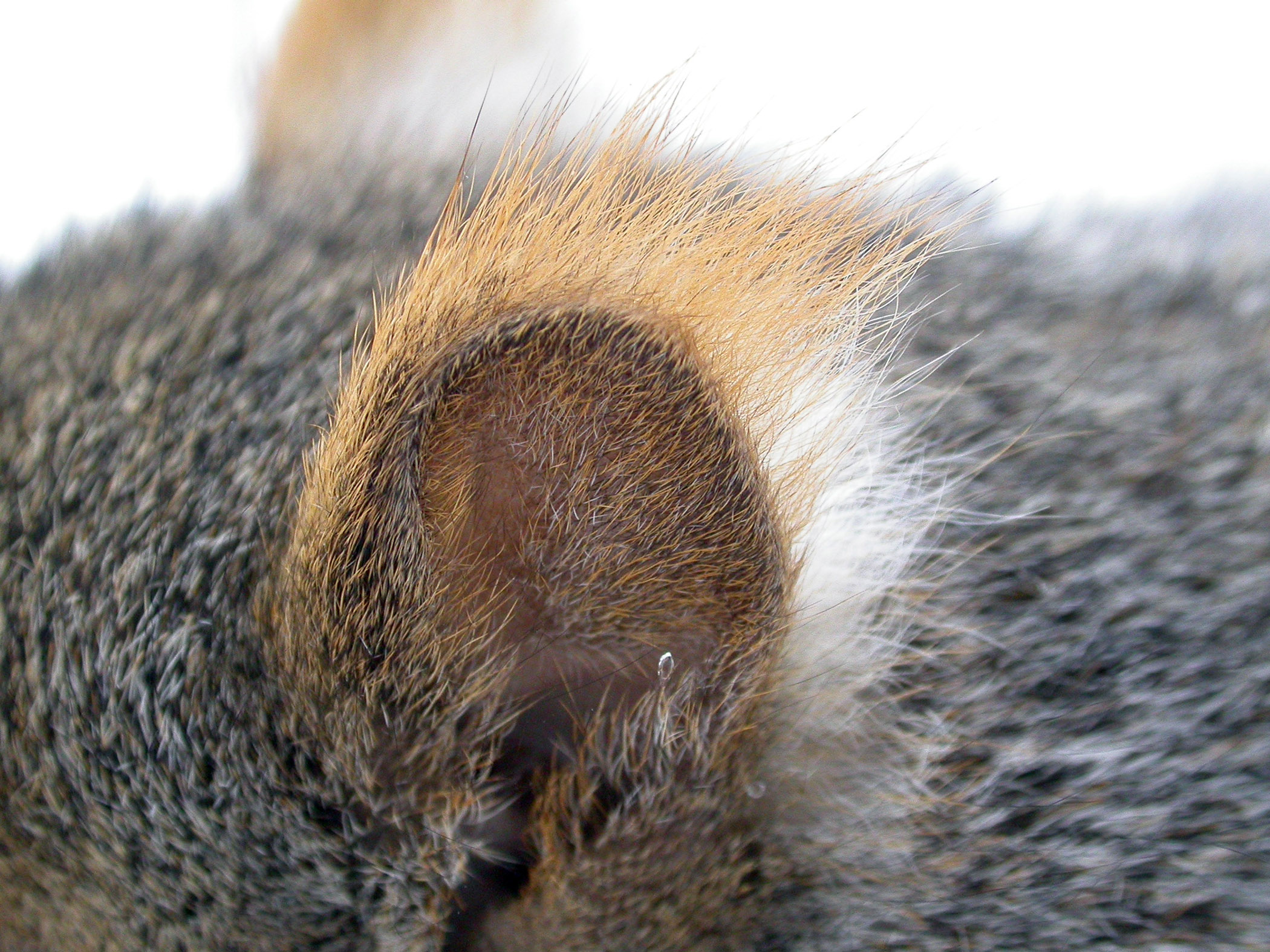 A close-up of a gray squirrel’s ear shows how much extra fur grows to insulate it for cold winter weather.

Now is when the females are coming into estrous, and squirrel activity is at its peak. Once mating has occurred the females will carry their young for 40 to 45 days, with birth occurring usually sometime in March. You can expect to see baby squirrels out and about by late April into early May. The older females, entering at least their second full year, will quite often have a second litter later into summer. That’s why I said that a 12-year-old female may already have raised 20 litters of young, most often three to a litter but as many as five.

The thought of being humane, trapping and moving some of the squirrels to different woods may occur to some people. Surely it would be unthinkable to do so now with most of the females pregnant and ready to have young. Suddenly having to find a new den tree and food source in a strange woods might be an impossible task for these creatures.

Consider too that there being a constant state of competition among the wild creatures for a good environment and the best available food, other gray squirrels will quickly move in to fill the void created by your trapping and relocation project. Nature abhors a vacuum.

You may balk at the suggestion, but if you absolutely cannot live comfortably in harmony with the gray squirrels on “your” property, then purchase weapons, ammunition, a state hunting license and this fall take up the sport of squirrel hunting. Learn to prepare and enjoy squirrel stew, a gourmet dish.

As for me I shall continue to occasionally grit my teeth and use my own squirrel vocabulary, try my best to keep these furry tail-waggers off the bird feeders, and realize they really do provide momentary enjoyment and relief from today’s fast-paced living.

Sure we feel we are stewards on this little piece of earth for which we pay taxes, but we don’t wish to “do it over” to the extent that little to nothing of the original exists. We want plenty of wildness to remain. Henry David Thoreau will always be one of our champions. Remembering one of his profound statements, “In wildness is the preservation of the world…From the forests and wilderness come the tonics and barks which brace mankind.”

And that wildness includes gray squirrels.