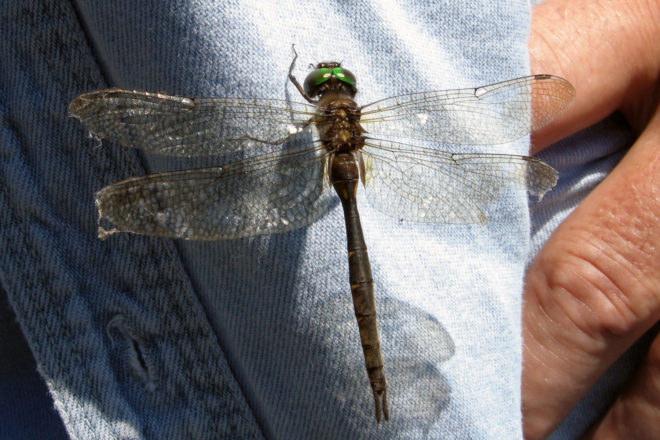 Not every dragonfly with green eyes is a Hine’s Emerald. This one is the Williamson’s Emerald. Photos by Roy Lukes.

One of the most fascinating, beautiful, helpful and misunderstood insect groups is now on the wing, the dragonflies. A very appropriate nickname, “mosquito hawk,” has been used to describe their awesome aerial maneuverability along with their important place in our summer world, that of catching and feasting on, especially, mosquitoes and black flies.

You will never in your lifetime have to worry about one of these amazing fliers biting or stinging you. Actually they don’t even have a stinger, but they surely can catch and consume scores of small insects during their short life spans as adults. Aeronautical engineers have taken careful notice of the flight of dragonflies.

While the front wings of these insects are moving downward the rear wings are moving upward. It is thought that this increases efficiency while producing a more stable flight. They can hover, rise, descend and fly forward or backward as they patrol the ponds and wetlands for their next meal.

A dragonfly begins its existence as a little savage predator preying on small creatures in the water, including the larvae of mosquitos. The nymph, called a naiad (NY-ad), has quite a formidable lower lip, large enough that it folds backward between its front legs, about one-third of its body length. It is capable of lashing out with lightning speed to seize its victims, which include mayfly naiads, crustaceans, tadpoles and even small fish.

Eventually, usually after a year or more in the water, the naiad crawls up the stem of, for example, a rush. Slowly the exoskeleton splits open down the back and out emerges the wet soggy dragonfly. The wings and body must dry completely before the little “spitfire” takes flight. From now on it will be strictly a creature of the air, but nevertheless still a voracious predator. It won’t go anyplace unless it can fly.

Here has been a virtually supernatural transformation of a creature, not unlike a little fish changing to another form of life such as a bird. This gauzy winged beauty will mate and spend its very short life, several weeks on the average, doing its most important job of controlling small insect populations safely without chemicals – and for no cost.

The so-called mating wheel of these insects has interested and attracted the attention of people for many years. The male produces sperm at the end of his abdomen. Just prior to joining with a female he bends his abdomen forward and deposits sperm in a tiny receptacle on the second segment of his abdomen. Following some unusual courtship actions of wing spreading or dipping, a female will be attracted. She will perch on a twig, for example, and quickly he will alight on top of her. Next he clasps her behind her head with the little “grippers” on the end of his body. Now the top of her abdomen will be curled forward and upward and placed in the male’s sperm receptacle. This is the moment when dragonflies, and also damselflies, having formed into their strange looking “mating wheels,” present such a mysterious picture to uninformed people.

Professor James G. Needham, a Cornell University dragonfly expert of some years ago, hand-fed housefly after housefly to a captive dragonfly held in his fingers. Needham learned that the dragonfly had an insatiable appetite or, as he described it, a “bottomless pit.” 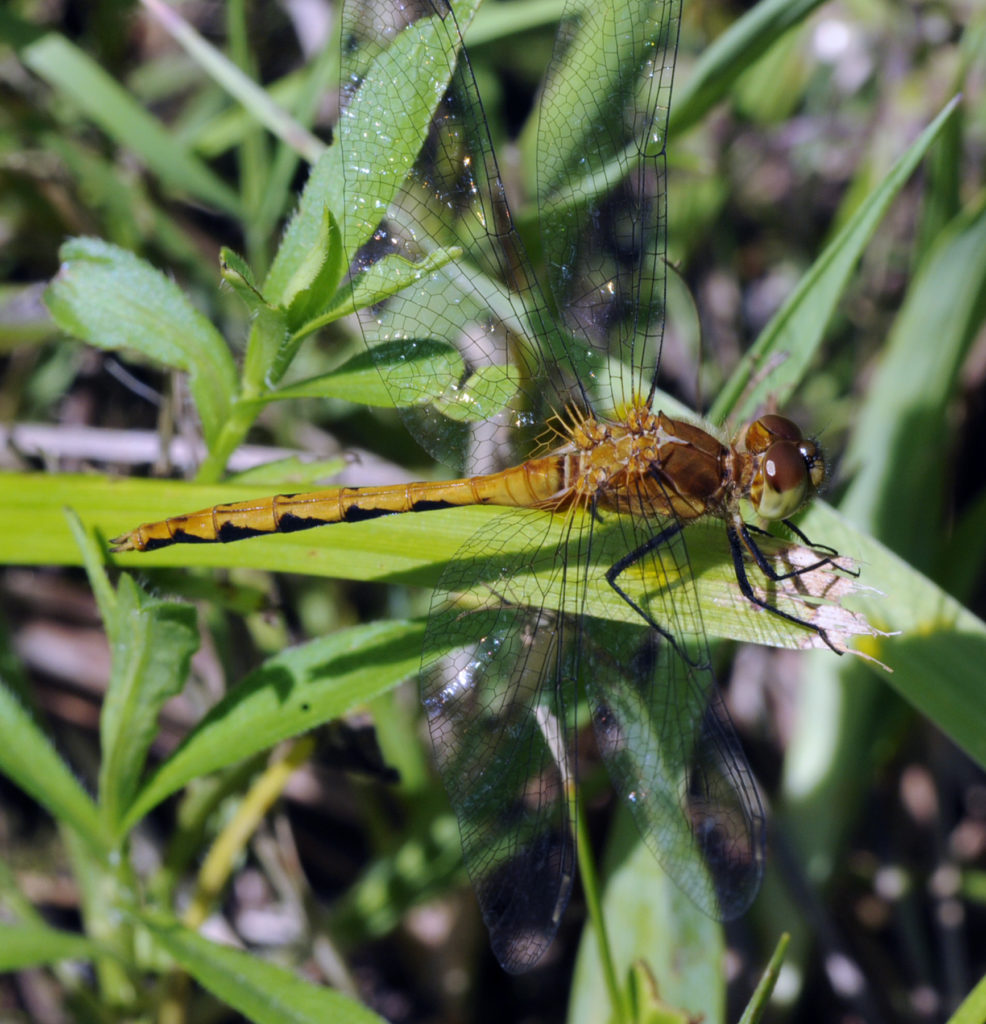 A female Ruby Meadowhawk takes a brief rest before flying off for another meal.

There are approximately 108 species of dragonflies known to exist in Wisconsin and most of them are difficult to observe, simply because they seldom perch long enough to offer you a good look. Such was the case late one afternoon after Charlotte and I had finished working in our garden. The natural area north of the garden shed has frequently been inhabited by several species of dragonflies, especially widow skimmers, even though that site is at least two miles from the nearest water at Lost Lake. Bear in mind that dragonflies are very strong fliers.

One dragonfly absolutely taunted me as it momentarily perched on a tall, weedy stalk just inches from my face. Naturally my camera was in the house, but at least I got a good look at what I think was a female Twelve-spotted Skimmer. Several consecutive sunny days have been forecasted which will give me good chances to get some pictures.

Capturing dragonflies is good for scientific research but isn’t recommended for one to simply have a good look at or to collect the specimens. Actually it’s a federal offense to even capture a Hine’s Emerald Dragonfly, a federally threatened insect, unless you have a state and federal permit. Dragonflies are very difficult to catch in a net and their vivid colors fade quite quickly after they have been collected. In case you want to study, admire and identify dragonflies, which I highly recommend, the advice of experts is to:  1. Use close-focusing binoculars or, 2. Choose a camera having a 100-200mm macro lens for getting good close-up pictures. Some of today’s digital cameras and lenses have built-in anti-vibration features that enable you to obtain remarkably clear hand-held pictures.

Just the names of some of the dragonflies known to be in Door County are enough to excite one’s imagination. Species include the American Emerald, Dot-tailed Whiteface, Ruby Meadowhawk, Crimson-ringed Whiteface, Calico Pennant, Williamson’s Emerald and the White-faced Meadowhawk.

Please consider observing, enjoying and photographing dragonflies a privilege, and along with privileges go responsibilities. Do what you can, even in a small way, to help preserve the wetlands so critical to the lifecycles of dragonflies and they in turn will amply reward you.

I look at what surely has to be one of the most beautiful and astounding creatures in nature, dazzling jeweled flier in the summer sunshine. The dragonfly has earned its rank near the top of all the fliers by first spending months on the murky bottom of a sluggish stream or pond. Watching dozens of dragonflies executing spirals, loops, zig-zags, stalls and other amazing aeronautical maneuvers in their insect-capturing feats will prove to be an exhilarating and memorable summer adventure.

I hereby nominate the dragonfly as Wisconsin’s official state insect. Hail to the “mosquito hawk!”