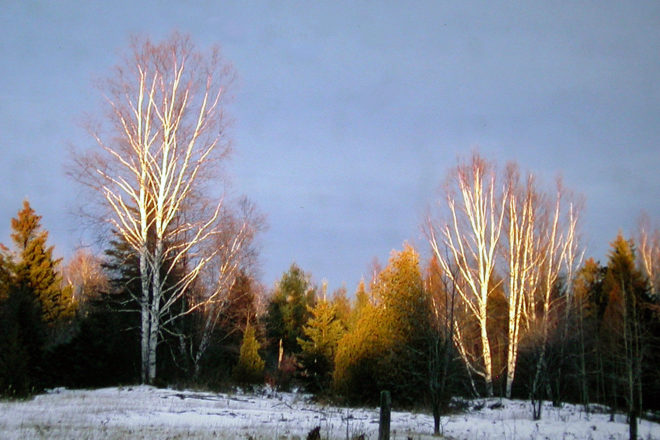 The red twigs on the upper branches on these paper birches show clearly against the blue sky. Photo by Roy Lukes.

The tree that really impressed us on our brisk early March hike had us looking up at its white beauty against a crystal clear azure blue sky. It was the paper birch. The manner in which this tree’s whippy, supple branches and twigs angle so sharply skyward tends to indicate the great flexibility the trees possess.

Look at these conspicuous, majestic trees from a distance to see the beautiful red cast their young upper twigs have, a fine contrast with the stark white trunks in late winter. I often park near the top of a high hill overlooking a wood and try to identify as many tree species as I can by the color and shape of their winter crowns. The birches are among the easiest.

James Russell Lowell, in his poem, “An Indian Summer Reverie,” described the birch as the “most shy and ladylike of trees.” Coleridge referred to this immaculate tree as “the lady of the woods.” Many people on my tours to observe and study nature asked if they had any idea why Coleridge called it the lady of the woods. Finally a sharp-minded chemistry professor came up with the best answer of all, “Because the paper birch is like a lady, always appealing!”

To the Ojibwe Indians of our northern lakes region, the paper birch was “wigwas.” From wigwas came wigwam, because birch bark was often used for covering the top of the small rustic shelter, thereby furnishing it with a waterproof roof. Buckets, baskets and canoes were also fashioned from this splendid material rich in resins and oils. The bark was also used as tinder for starting fires. Miss Emma Toft nicknamed this highly combustible material the “Indians’ kerosene.” In fact it will work quite well even when wet.

Caress the trunk of a paper birch and your hands will come away with a delightful, chalky, resin-like feel. Indeed its bark, rich with special resins, is extremely waterproof and long lasting. Examine a birch tree that has fallen to the ground some years ago. The wood will be soft and punky but the bark will be in a surprisingly good state of preservation due to the resins and oils. The Indians, in their reverence toward this great tree and especially its bark, pointed to the fact that the bark was the last part of the tree to decay. 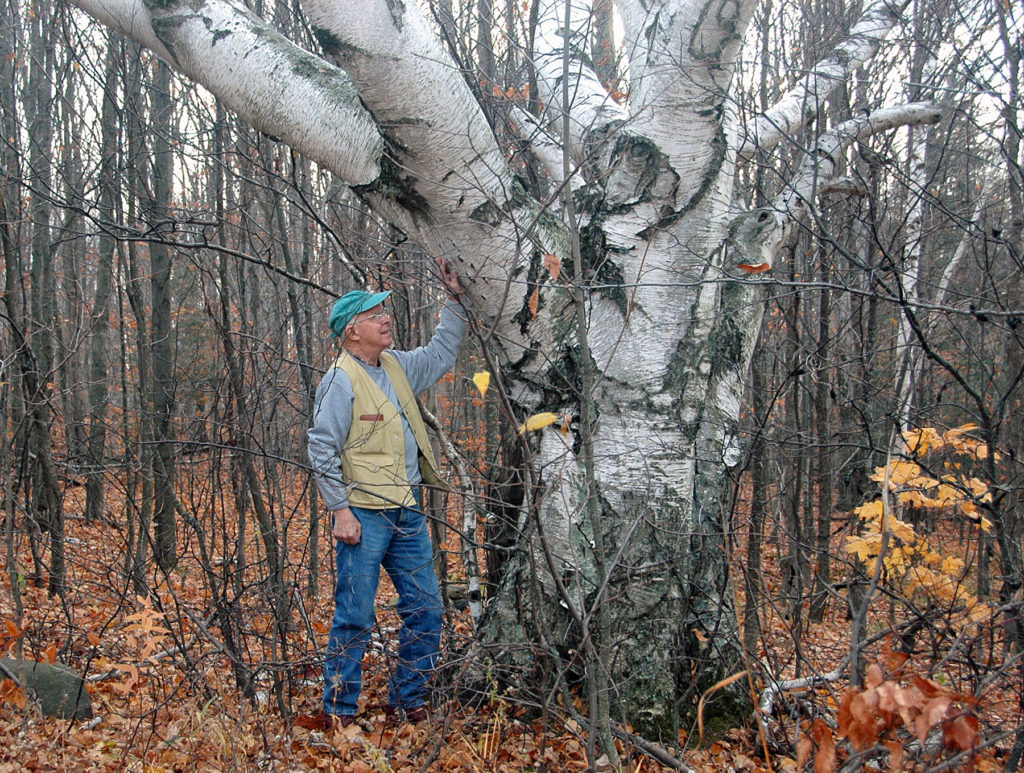 Roy admires a large old paper birch at the edge of the woods. Submitted.

Roots of the birch were used by some Native Americans as a seasoner in medicines. The sweetish, aromatic, wintergreen-like flavor disguised the less palatable doses. Strangely, white people in later years dug and dried the roots of goldthread plants, having a very astringent bitter flavor, and added this to many of their patent medicines. The accepted thought of the day was that the more terrible the taste of a medicine, the better it would cure your ailments.

Our hikes on top of the hard-crusted snow of the early February woods have revealed thousands of birch seeds, along with the very tiny bird-like, cross-shaped “wings” to which the seeds were attached, littering the ground beneath many of the tall, stately paper birches. On several occasions we caught sight of the birds that had caused this “rain” of seeds to the forest floor and they were pine siskins, common redpolls or American goldfinches. Birch seeds rank among their favorites. Ruffed grouse are also known to eat the buds, catkins and seeds of these trees.

The paper birch, Betula (“BET-u-la,” the ancient Latin name of a birch) papyrifera (pay-pi-RIF-er-a, alluding to its paper-like qualities), is truly a tree of the North. No broad-leaved tree is hardier. In fact it is said to be the only tree native to Greenland and Iceland. They grow to about 66 degrees north latitude on the continent. Seven states have many millions growing there, Wisconsin, Minnesota, Michigan, Maine, Connecticut, Vermont and New York. Go to Canada if you wish to see mile after mile of these beauties.

An outstanding example of one of its growth requirements can be seen in hilly regions of its range, especially here at around 45 degrees north latitude. The steep northern slopes will contain many birches while relatively few will exist on the southern slopes. One theory presented to me is that the bronze birch borer, a destructive insect to birches, destroying their tips, will not tolerate the cooler shady north slopes but will thrive on the warmer southerly slopes. Birch trees like it cool.

One of the best things that happened during my boyhood was when on a Sunday afternoon a small group of boys from our seventh and eighth grade Sunday school class was taught how to swing on the birches. Our wonderful teacher, Walter Kacer, knew that a rowdy bunch of junior high boys would respond better to his Bible teaching if we trusted and respected him. He accomplished this, and extended his teaching as well, by taking us for long hikes in the woods and along the shores near Kewaunee every few weeks after church.

We soon mastered the important art of choosing just the right tree. Size was vital. How we would shimmy up the slender trees (which is when I developed a liking for the resin on my hands). Gradually we reached the point where we began to sway slightly to and fro, and then we made the last slow reach upward for that critical and all-important firm grip on the slender trunk.

Now, slow and easy, up came our legs, bent at our hips and knees and braced up against the tree as high as we could bring our feet. Then with a combined kick-off with the feet and outward thrust of the body, holding on for dear life with our hands, we would sail in a slow graceful arch backward, down to the ground. In case one particular tree worked unusually well, that tree got ridden over and over until there was no ride left in it. Never, that I can recall, did a birch tree ever break from our rides.

As Robert Frost so eloquently said in has heartwarming poem, “Birches,” “One could do worse than be a swinger of birches.” Yes, I too, like the Native Americans, shall always have deep respect and admiration for “the lady of the woods,” always appealing in so many ways!