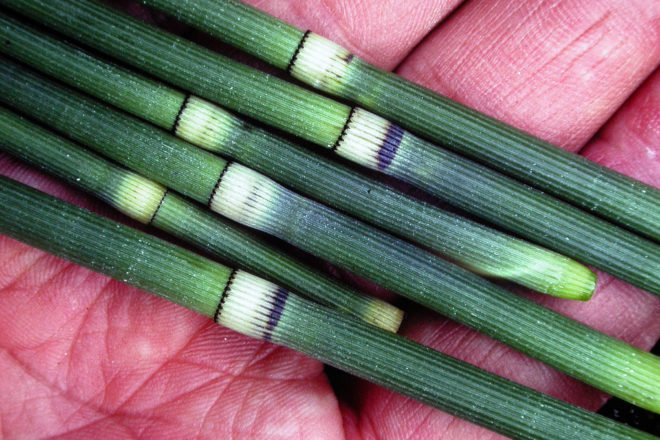 A close view of the tall scouring rush segments shows the fine ridges that are filled with the amorphous quartz. Photos by Roy Lukes.

The farthest thing from my mind was a “living fossil” when a friend called me with a strange request many years ago. Robert Marcellus, principal clarinetist with the Cleveland Orchestra at the time and also a member of the Peninsula Music Festival Orchestra, called me seeking the whereabouts of some rather thick, robust scouring rushes.

My interest was immediately aroused, so I asked him why he was looking for these unusual and generally overlooked plants. It turned out that he used the individual dried sections of scouring rushes as miniature cylindrical sanding devices for shaping his clarinet reeds. I have recently learned from our friend, David Bell, professor of clarinet at Lawrence University in Appleton, that indeed these small, extremely fine sandpaper-like sections are the best for producing the ultimate “smooth-as-glass” finish on reeds. 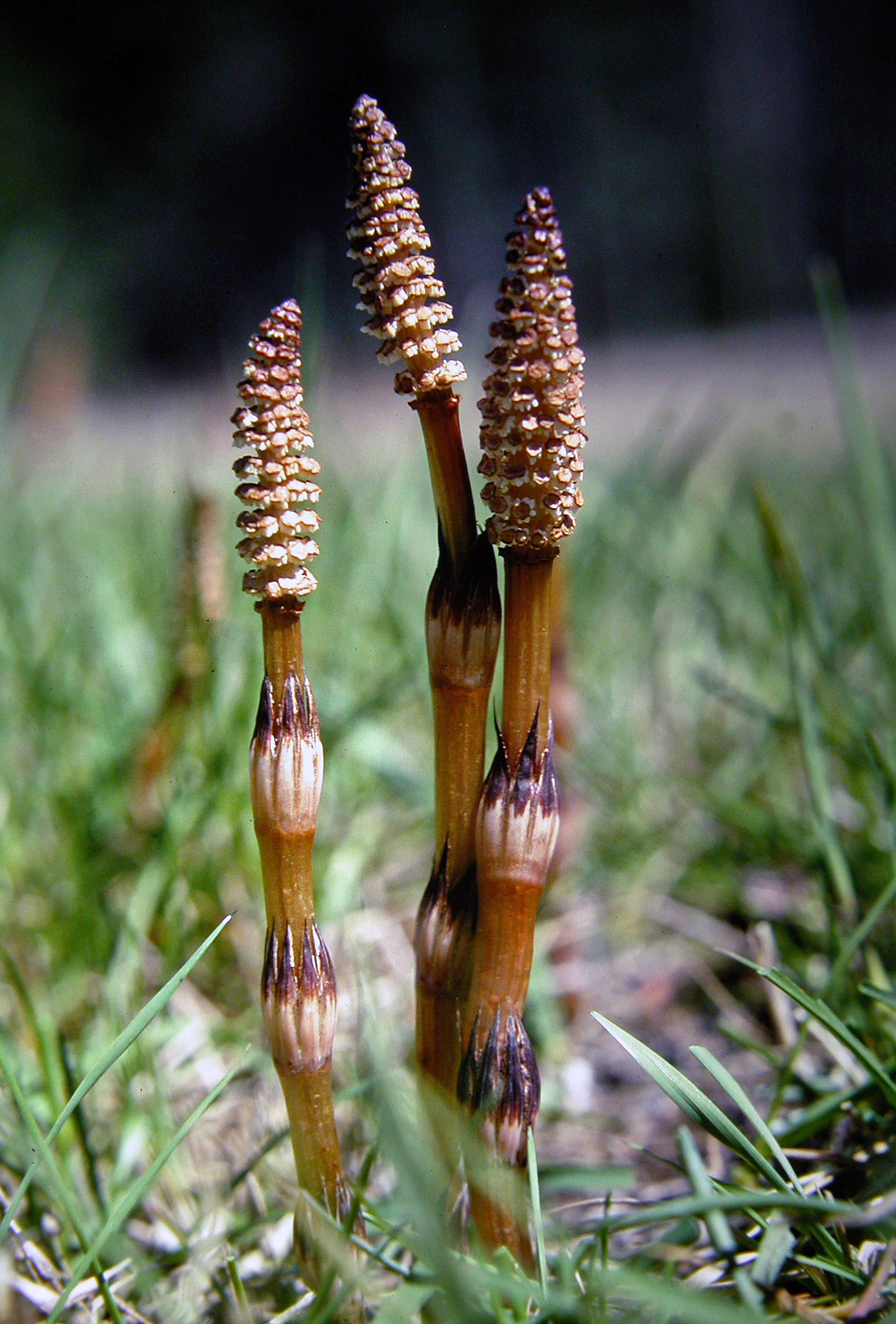 The fertile form of the common field horsetail produces spores in spring and then withers and dies.

A number of years ago, before the four-lane highway between Sturgeon Bay and Green Bay was constructed, we always slowed down to marvel at the huge 100-yard-long patch of tall scouring rushes growing within 10 feet of the highway in Southern Door. The plants were thriving in the shade in sandy soil at the base of a wonderful hill, where they apparently were receiving constant seepage of moisture.

On one of the trips I stopped to snip off two of the plants – among tens of thousands – and took them home for further examination. They were about 32 inches long and had between 12 and 14 sections, each averaging two to three inches in length. Having been dried, the sections were extremely abrasive and easily removed surface material from one of my thumbnails.

Here is what makes these scouring rushes so abrasive:  Rain falls to the ground and absorbs carbon dioxide from the air, which then forms a weak solution of carbonic acid in the rain drops. Through the years this constant addition of acid to the wet, sandy soil, in which the scouring rushes grow, slowly dissolves some of the sand, which is primarily silicon dioxide or quartz.

This quartz in solution within the sandy soil is taken up by these plants and hardens in the outer cell walls into what is described as “amorphous quartz” which lacks definite form or shape. If one were to take an individual section of a tall scouring rush and carefully suspend part of it in a container of acid overnight, by morning all that will remain of the immersed section will be the delicate cylindrical form of the un-crystallized quartz – the fragile, glass-like skeleton of the tall scouring rush section.

Scouring rushes belong to a plant group known as horsetails. Its genus name, Equisetum (ek-wi-SEE-tum), is derived from the Latin “equus” (meaning horse) and “seta” (meaning bristle). This is in allusion to some of the species’ needle-thin lateral leaves which, when bunched together, do somewhat resemble an imagined, small green horse’s tail.

They are segmented and not related to the rushes, which reproduce from seeds – and are extremely far removed from horses! They do not have flowers, instead reproducing from spores as well as from rhizomes situated on the underground roots. The above-ground scouring rushes are annual, wither and dry up at the end of the growing season. The underground roots and rhizomes are perennial and are capable of forming into enormous colonies.

Most people show considerably less interest in plants lacking flowers. Unfortunately they are missing out on some fascinating and very primitive plants. By the way, due to the extremely small size of this “living fossil” group of plants, they are usually included in field guides featuring ferns and their allies such as club mosses. It is generally thought that there are about 25 species of horsetails in the world today. Some experts even lower that number to around 15, due to the extreme rarity of some of the species. Their history is better known than any living group of plants. 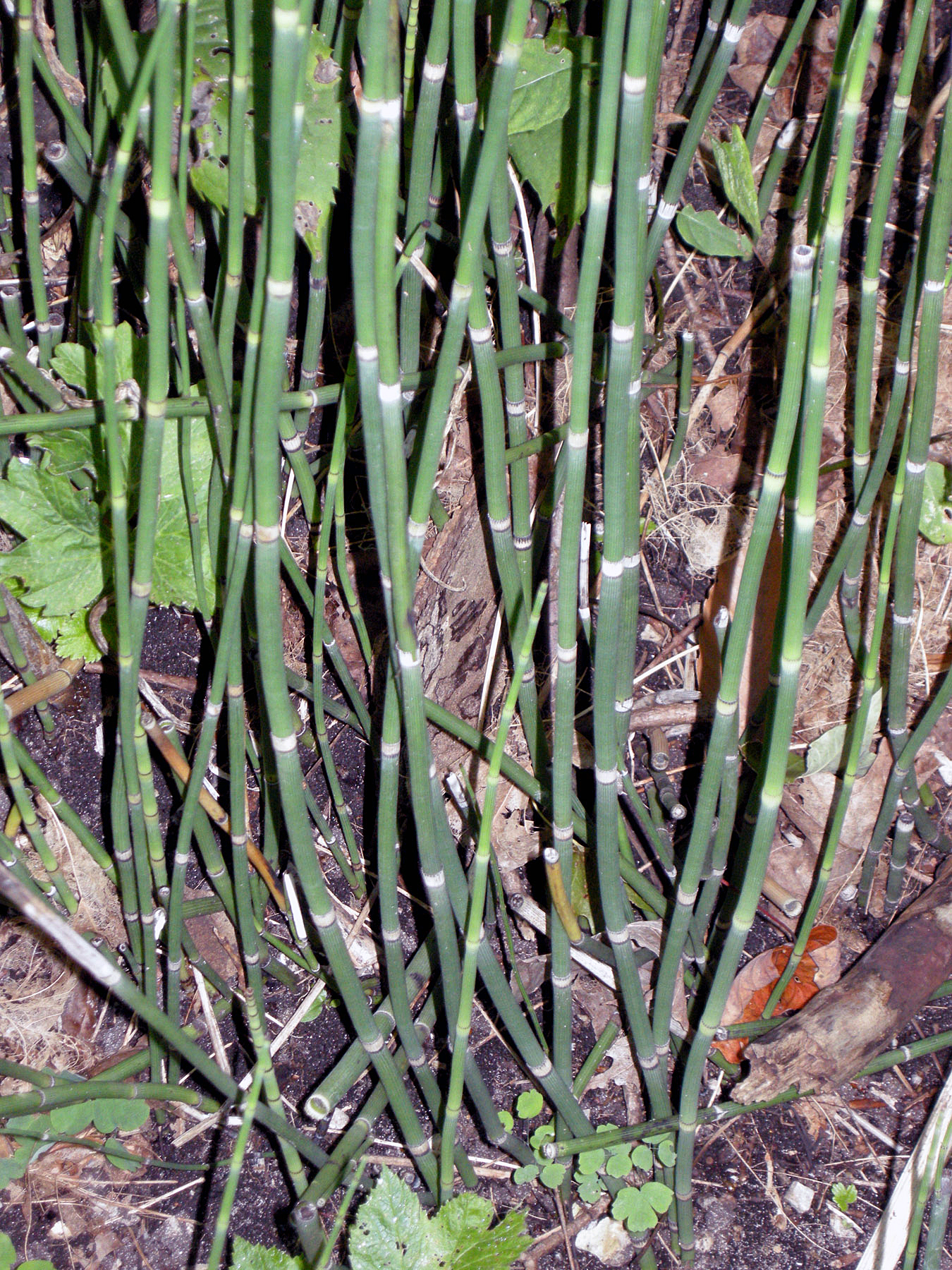 Here is how the tall scouring rush grows. The white rings indicate the divisions between sections.

Imagine a great southern swampland containing hundreds of square miles of wetlands, such as the great Okefenokee Swamp in southern Georgia and northern Florida. Tree-sized horsetails, as tall as 50 feet, growing in such a swamp for hundreds of years triggered the development of extensive peat bogs. These, in turn, produced the vast coalfields on Earth today. Modern horsetails are rarely taller than three to four feet.

Eleven species can be found in Wisconsin with six species quite common in Door County. The species most people see and recognize is the tall scouring rush. This is very likely the species that the Native Americans – and later the pioneer women who learned from them – tied together into fist-sized bundles, dried them and used to scour their pots and pans blackened by the fires – hence the name scouring rush. The fact that the stems of the abundant tall scouring rush contain tiny raised ribs running from top to bottom increases their effectiveness as scouring material.

My favorite species, perhaps three to four inches tall, twisted and contorted in its shape, is the dwarf scouring rush. Like all of its other relatives, this plant is segmented and abrasive. The most abundant species is the field horsetail appearing like very thin-branched, foot-tall conifer trees. This is the sterile form, while the fertile form containing spores, growing by the thousands in late spring along graveled roadsides, is light salmon color, around four to six inches tall, and quickly withers and dies after releasing its spores.

I bristle whenever I read of a particular plant, such as the horsetails, having no commercial value. Many people automatically imply from this thought that the plants have no value whatsoever, period! In reality they provide excellent ground cover in many plant and animal communities, holding the soil in place and sheltering small plants. Obviously these narrow-minded people overlook the horsetails’ ancestors whose carbonized remains contributed to the formation of coal.

No plant used by people today dates farther back into history than horsetails, “living fossils.”