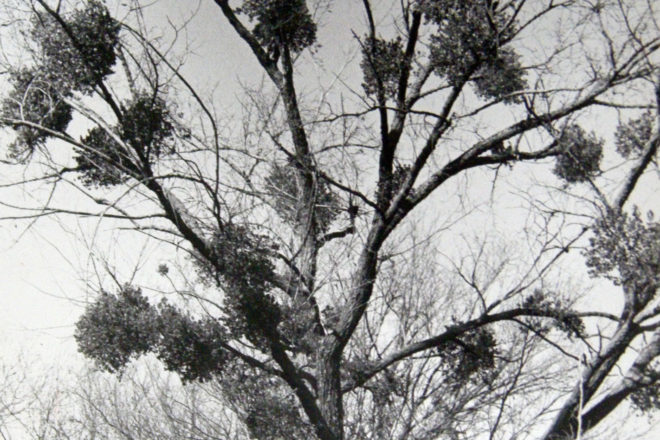 A tree full of American mistletoe in Vinita, Okla., is doomed by this parasitic plant. Photo by Roy Lukes.

A custom with ancient pagan connections that was frowned upon by the church for many years, then used secretly in homes for a long time, has finally become a common holiday practice.

Nevertheless, the very nature of mistletoe and its uses are poorly understood by many people today.

So rigid were the beliefs of some Europeans regarding the use of mistletoe a few centuries ago that it was assumed that, unless kissed beneath it at the solstice, a maiden could not wish to be married that year. Presumably this meant both the summer solstice, around June 21, and the winter solstice, which happens on Dec. 21 this year.

Northerners who retire to subtropical or desert climates soon realize the importance of evergreens, including mistletoe, during the Christmas season. Perhaps it is because mistletoe grows “in the air,” not on Earth, that it eventually became a symbol of spiritual qualities. Along with the oaks, mistletoe came to represent strength. Displayed in homes it was thought to bring health, happiness, safety and good fortune.

Three traditional Christmas greens of the colder European countries – mistletoe, ivy and holly – have pagan origins. However, the mistletoe was of most importance during this season to the druids, members of an order of priests in ancient Gaul and Britain who appear in Welsh and Irish legends as prophets and sorcerers. The European mistletoe, Viscum album, was commonly found parasitizing oaks as well as apple trees in England.

It’s difficult to visualize a parasitic shrub having leathery evergreen leaves and waxy white berries growing out of a tree, but that is precisely the case with these unusual plants. Most fruit-eating birds consume the berries and scatter the sticky seeds by wiping their bills onto the bark of other trees. It is also believed that the seeds are scattered in the birds’ droppings. In fact, “mist” in Old High German (OHG) means dung. The Gothic translation of the word “mistletoe” is “the seeds being planted in the droppings of birds that have eaten the berries.”

Charlotte and I were fascinated to see great quantities of American mistletoe growing on trees along some city streets in Oklahoma a number of years ago. We purposely drove down a few side streets in the city of Vinita to photograph the fascinating plants. Some trees had 30 or more one- to three-foot clusters of the parasitic shrubs adorning their branches. Unfortunately, a tall stepladder would have been necessary to obtain close photographs of the healthiest of the plants containing many whitish berries.

The scientific name of the American mistletoe is Phoradendron flavescens. “Phor” in Greek means thief and “dendron” refers to tree, so “tree-thief” would describe this plant perfectly. Flavescens means yellowish, an allusion to the yellowish-green leaves. The evergreen leaves are thick, firm and quite leathery. The forking twigs of these woody parasites break off easily at the base.

The very tiny flowers are dioecious (die-EE-shus), simply meaning that separate plants are either male or female. Many plants in the flowering world are said to be “perfect,” having both male and female flowers.

Mistletoe plants are actually semi-parasitic. They do contain some chlorophyll and can manufacture some of their own food. However, these persistent slow-growers bring the “kiss of death” to the trees on which they have been planted by birds. Indeed, the mistletoe plants grow into the twigs and branches and will eventually sap the host tree to death. Yes, the mistletoes are firmly rooted and attached to the tree that will supply nearly all of their growth requirements. That they are “air plants” is a misnomer.

I strongly suspect that many property owners have the unwelcome mistletoe plants removed from their prized trees, including especially red maples, tupelos and other hardwood species. No doubt it is expensive undertakings to have tree specialists remove the large greenish clusters from huge old trees. Judging from the large number of rather isolated properties that we drove by where most of the big trees were badly infested with mistletoes, I suspected that the owners simply couldn’t afford to have them removed.

Here’s hoping that all of you fun-loving people can have some memorable experiences under the mistletoe this Christmas. Enjoy the holly and the ivy and have yourself a Merry Christmas season! Surely the druids will not mind.