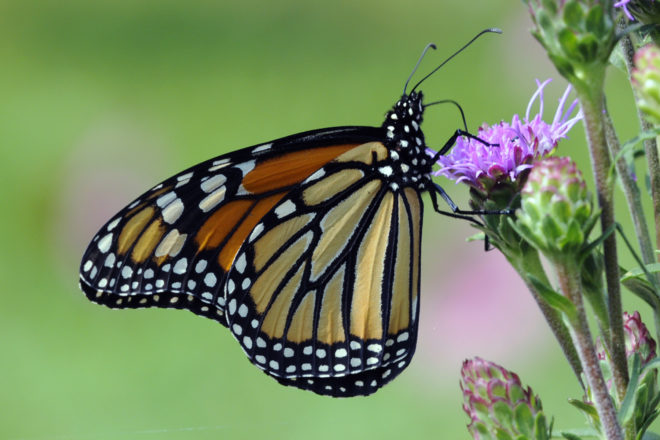 A female monarch shows the thicker black lines in her lower wings. Males have thinner lines and a scent spot on the lower wing. Photos by Roy Lukes.

There is one among the many wildlife species in Door County that has become our favorite natural symbol of summer – the monarch butterfly. The 50-plus summers that I have admired, watched and fed some of them have brought ups and downs in their numbers, with this summer being one of the better in recent years. Despite some freezing weather in their Mexican wintering grounds and strong storms along their migration path we are seeing many more now than we did last year. 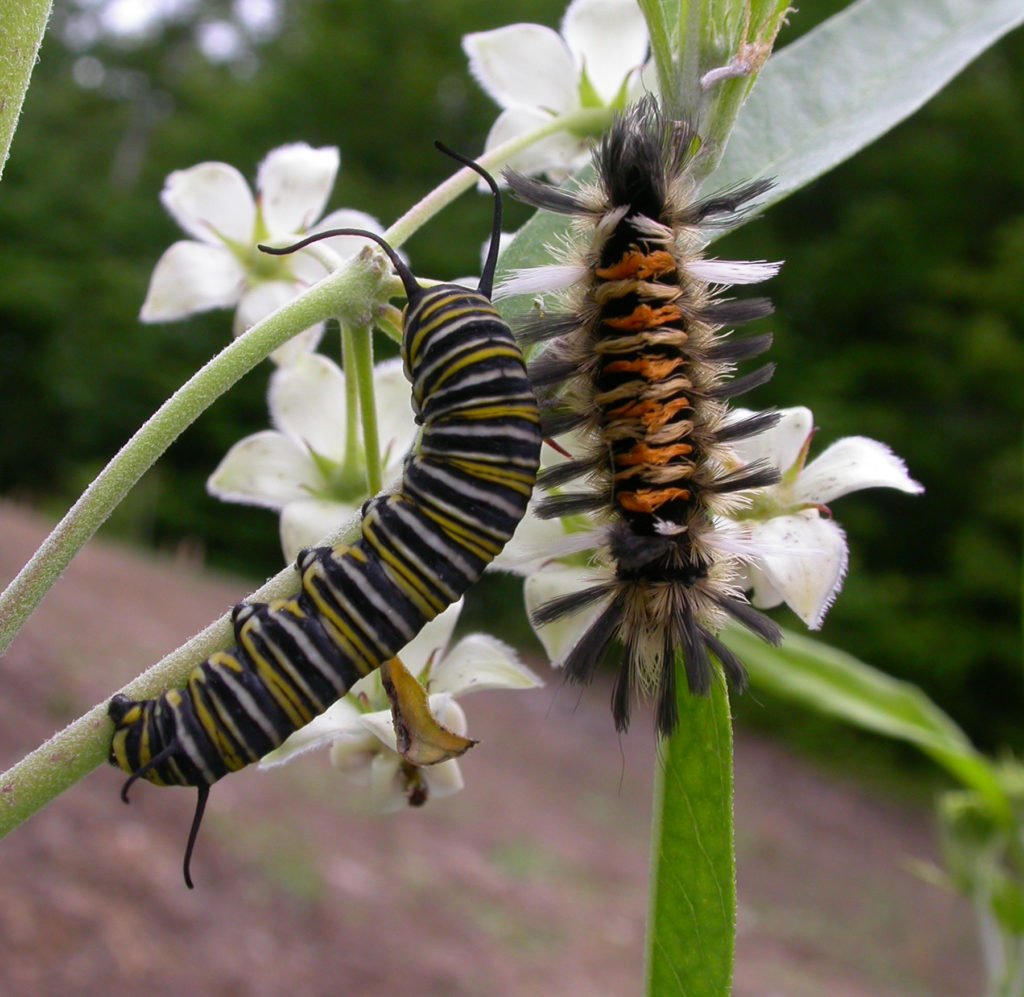 A monarch larva and a milkweed moth caterpillar sit next to each other for a nice comparison.

These fragile flyers, never having been to their winter homes, find the oyamel fir forests west of Mexico City and spend the cool season resting before heading back north in March. This forest region is extremely limited, with only 12 isolated mountaintops that will sustain the monarchs with the right amount of moisture and proper temperatures. The oyamel forest ecosystem is Mexico’s most endangered forest type, with only two percent of the original habitat remaining.

The first monarch I saw this spring flew across the front of my car as I drove home from northern Door in mid-May. It was a cool month and I did not expect to see one of these beauties so soon. Several other sightings near Egg Harbor by early June gave me hope of having a good season for their reproduction.

These early monarchs were the first generation butterflies of a pair that had spent the previous four to five months in Mexico. Assuming the pair may have left Door County in mid-September of last year, they were the last of three or four generations to have existed here. The first two or three generations successfully bred, the females laid many eggs and then both male and female adults died after living from two to six weeks.

Amazingly the last generation of monarchs to eclose (a better term to use rather than emerge) had immature sexual organs. This last generation of strong fliers headed south, using what modern science believes to be a built-in, time-compensated sun compass, to a centuries-old monarch wintering site of around 50 square miles. Bear in mind that at least four generations have passed and that they were quite magically locating a place they had never been to before, but to where their great-great-great-great-grandparents had been the previous winter. 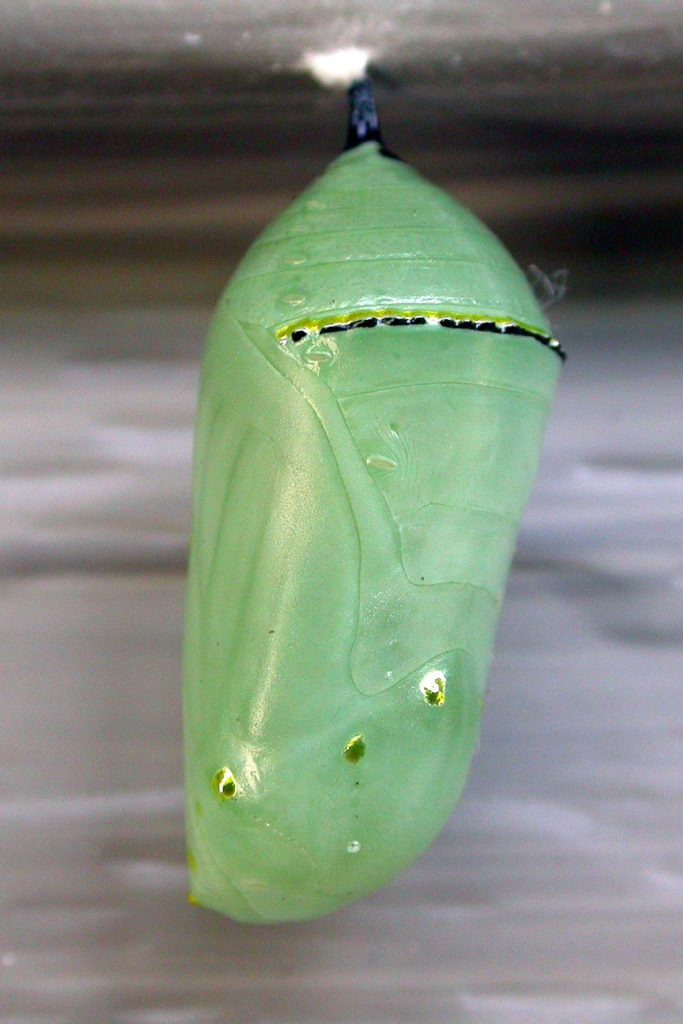 The jade green monarch chrysalis is decorated with gold dots.

There they rested, gradually matured sexually, started northward sometime in March, mated, laid eggs on one of several species of milkweed plants in, perhaps, southern Texas or Louisiana, and then these seven-month-old butterflies died. The eggs hatched into caterpillars after about four days followed by around 14 days of feasting on milkweed foliage. Now they shed their skin and developed into beautiful jade green chrysalids where they remained for approximately 10 days. Upon eclosing as adults they headed north, arriving in Door County anywhere from late May to mid-June.

I remember as a child seeing some monarchs in our large flower gardens at home in Kewaunee but I don’t recall any native milkweed plants near our place. The only native species there are the common milkweed, Asclepias syriaca (as-KLEE-pea-as si RHY-i-ca) and the swamp milkweed, A. incarnata (in-car-NAY-ta) on which those adults would have been feeding when they were in their larval stage. Either the adults in our garden were feasting on the nectar of various flowers or weeds or the males were pursuing females for mating.

Our front yard now is ablaze with colorful flowers, some perennials and some annuals, all of which are attractive especially to butterflies and hummingbirds. The swamp milkweed appears to be the favorite but the smaller Mexican milkweeds and the Mexican sunflower are also attractive to the visitors. A few tall verbenas rank a close third in favorites.

The two host plant species which have been virtual magnets to the female monarchs again, and on which they have laid many eggs, are (1) the tall native swamp milkweed, whose species name of “incarnata” means flesh-colored, and (2) the Mexican milkweed, Asclepias curassavica (cur-a-SAV-i-ca). I’ve also heard this flower called the bloodflower and the scarlet milkweed. It is strictly an annual at our latitude, is easy to grow from seed and the monarchs favor it quite highly. I counted a minimum of five monarch caterpillars on the eight Mexican milkweeds and four on the swamp milkweed a few days ago.

Another excellent host plant for attracting the monarch females and upon which they will deposit their eggs is the giant swan plant, or simply the swan plant. We did not get any of these plants this year but hope to next spring. A very good source for seeds of several species of monarch butterfly host plants is the “Monarch Watch” organization. Their website is monarchwatch.org, and their phone number for seed orders is 888.824.4464. This nonprofit group, dedicated to education, conservation and research ranks very high in my book. 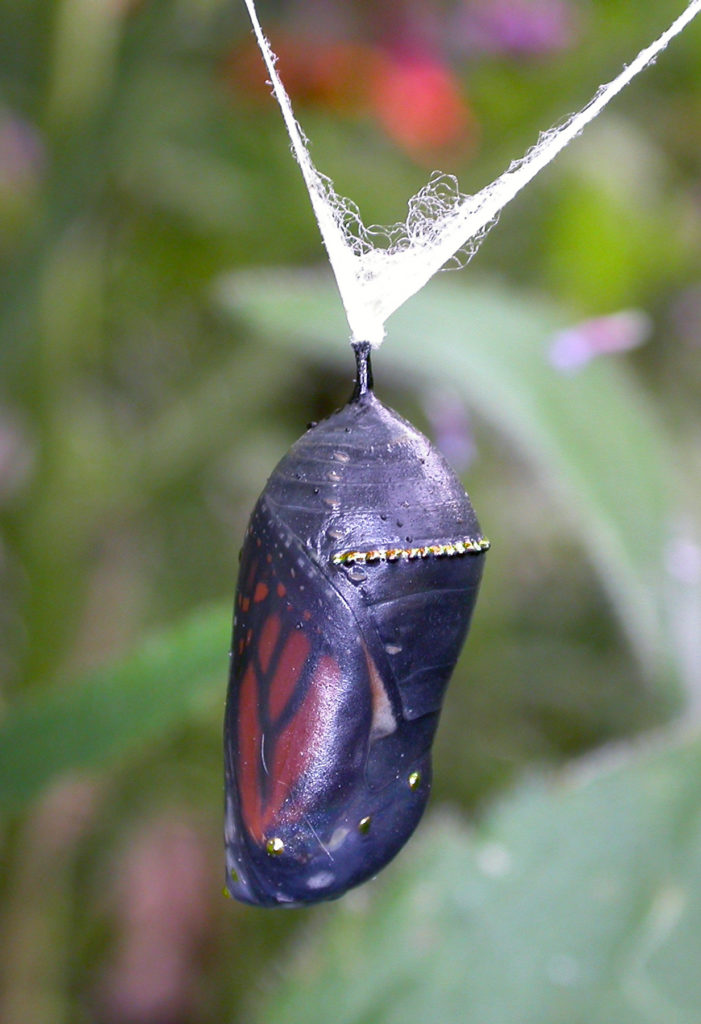 This chrysalis is ready to pop open as the monarch butterfly appears ready to begin a new stage of its life.

Dr. Karen Oberhauser, who has been studying the monarchs for more than 34 years and is one of the founders of this group, has, along with Ba Rea and Michael Quinn, written an outstanding little book, Milkweeds, Monarchs and More, a Field Guide to the Invertebrate Community in the Milkweed Patch. Its color photos are excellent and I refer to this little gem of a field guide a lot.

The 4×8-foot raised bed in our front yard, in which we plant all of our milkweed plants along with other butterfly and hummingbird-attracting plants, is what the Monarch Watch group promotes and calls a monarch way station. It provides these incredible butterflies with nectar on their way north, both nectar and larval host plants throughout the summer and finally more energy-rich nectar for the monarchs as they stop to feed along their fall migration to Mexico.

What a highly precarious balance exists between our needs and the needs of other species with which we share the planet. Many require our help.

We hope these wonderful creatures are having a good summer in their entire breeding region and that next spring their progeny will return in greater numbers to provide nature lovers with more exciting observations. Summer would be very incomplete without monarch butterflies.