Shaggy manes can grow in big clusters in lawns or along roadsides. Photos by Roy Lukes.

Whenever I reminisce about my boyhood in Kewaunee, I can picture my dad at his happiest, returning home with baskets of honey mushrooms he had picked in the woods on a Sunday morning in September. Undoubtedly I can trace my fondness for this delectable fungus to his tutoring. Today Charlotte and I rank this common mushroom among our favorites, and we thank my mother for the wonderful recipe of delicious soup Charlotte makes with them.

I wish I had a dollar for every time I heard someone mispronounce the word fungi. It’s “FUN-ji,” (j as in joy), not “FUN-guy,” although that’s how some of you gals might describe your husband or boyfriend! Fungus is singular while fungi is plural. 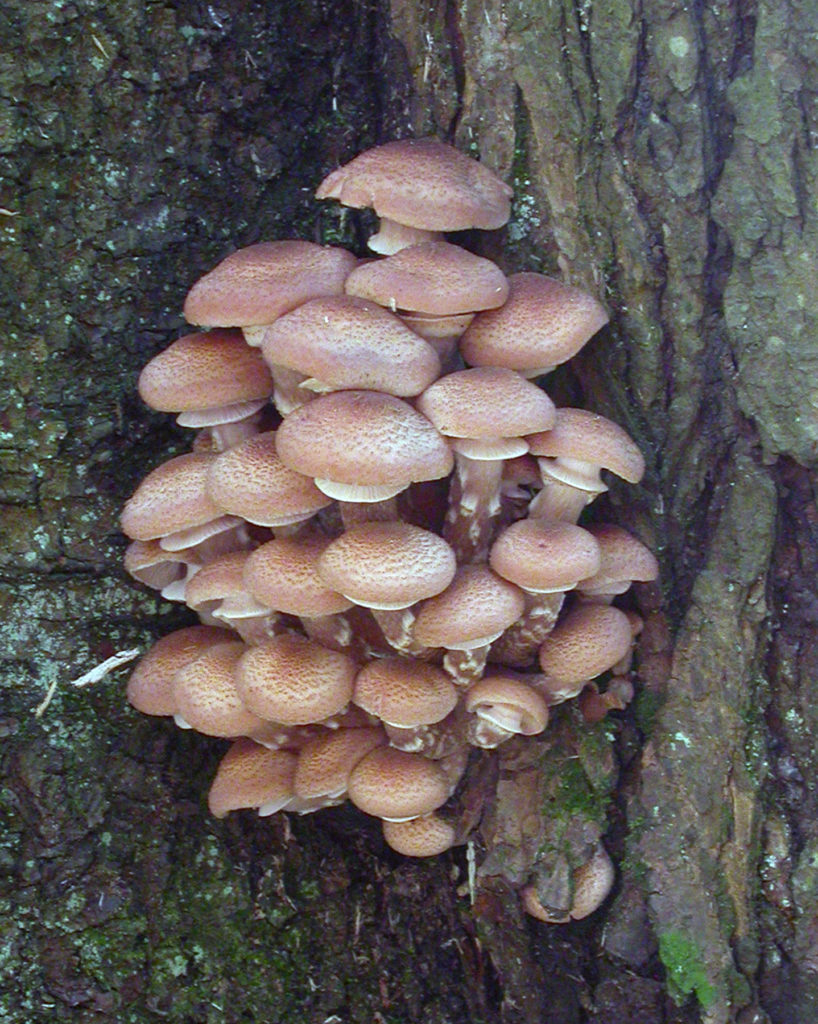 The honey mushroom is difficult to identify for beginners as it looks like many other species.

Remember, every mushroom is a fungus, but not every fungus is a mushroom. For example there is yeast, a fungus used in making dough rise and for causing beer and wine to ferment. Blue mold, another fungus, is in Roquefort cheese, penicillin is a widely used antibiotic and athlete’s foot is a pesky fungus which some people get. The word “mushroom” very likely stems from the French word “mousseron,” referring to moss. Many are found growing not necessarily in moss but rather in mossy places.

Usually the first questions people ask when shown a wild mushroom in the woods are, “Can we eat it?” or “Is it edible?” Between 10 to 15 percent are edible in varying qualities. Roughly 10 percent are poisonous and about 75 percent are neither edible nor poisonous simply because they are too small, too bland, too bitter or too tough.

We shudder at the thought of anyone picking and eating pure white-gilled mushrooms other than the easily recognized shaggy manes. This is extremely risky business at best unless you are willing to spend the time seriously studying the various characteristics of all the mushrooms you find. Remember, free mushrooms that are picked and eaten, but prove to be deadly were consumed at the price of ignorance and carelessness!

Invariably it is the pure white mushroom, naturally resembling the store-bought variety that gets people into deep trouble. Some of the most deadly gilled mushrooms, in the genus Amanita, such as the pure white “destroying angel,” contain phallotoxins and amatoxins, which, when eaten, attack one’s liver and kidney cells and frequently result in painful death.

Wildflowers of summer are gradually replaced by the colorful and varied fungi. Some people look at this wonderfully formed group of plants as a third kingdom surrounded by a web of legends dating back hundreds of years. However, the popular ignorance of many Americans toward mushrooms is just short of astounding. Perhaps it is best to let it go at that and urge the great majority to confine their mushroom hunting to the shelves in the supermarkets.

Many people, including ourselves, follow the safe and sane course when it comes to mushrooms, although we do eat around a dozen different species. For the most part we enjoy their rich and stunning variety of color, shapes and especially the quiet secluded environments that so many of them grow.

The stately aristocratic Amanita mushrooms are always quick to attract one’s attention. Woody hemlock polypores, always growing on rotting hemlock trees or fallen logs, appear wet, as though they received a fresh coat of varnish. Feel one and you’ll discover they are perfectly dry to the touch.

The subject of mushrooms to some folks is purely gastronomic. Many houby hunters (houby is pronounced HOE-bee, Czech for mushrooms) in my hometown of Kewaunee picked only one kind of mushroom. They called it vaclavky (VOTS-luv-kee). This fleshy fungus, named in honor of old King Wenceslaus IV of Bohemia, is actually Armillaria mellea, the honey mushroom. Melleus refers to honey, the rich, tan cap color of these slimy delicacies. 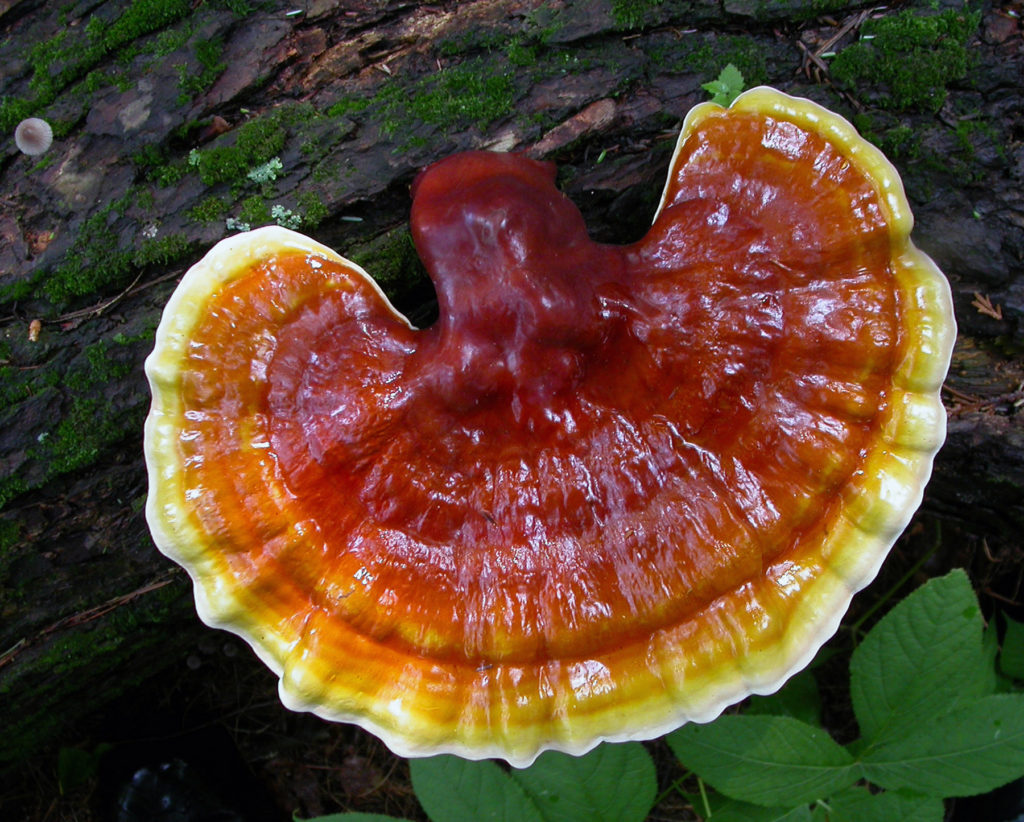 This shiny hemlock polypore appears wet but is quite dry to the touch.

Sites of the houbies’ “finds” were guarded like military secrets. And talk about quantities picked – bushels of them! Most were canned for winter use. My very favorite meal using them was my mom’s delectable cream of mushroom-onion soup.

Some mushroom hunters look down upon the lowly honey cap, or “stump mushroom,” because it is very slimy when cooked. In our opinion this is the quality that makes it so perfect for soup.

The oyster mushroom, shaggy mane, giant puffball, common morel, chanterelle, horn of plenty and the aborted entoloma (which we call earth prunes) all are on our list of edibles. What’s so exciting about learning to properly gather and safely eat wild mushrooms is that, from the first morel in spring, to the unusually elegant “gourmet” chanterelles in mid-July, to the many other edibles in later fall, the season runs for at least six or more months.

Some of the most fascinating mushrooms are woody in nature but nevertheless of great beauty. One that is very recognizable in shape is the horse’s hoof fungus that grows mainly on dying paper birch trees or on beech trees. Another that can be enjoyed practically year round is the multi-colored turkey tail fungus.

Keep in mind, if you insist on experimenting with eating wild mushrooms, save a few raw specimens. To do so, wrap them in wax paper and store in the refrigerator. That way there will be some evidence to inspect should you end up in the hospital emergency room with a bad reaction to eating them. Another very important point is to never eat a raw mushroom. They should always be well cooked.