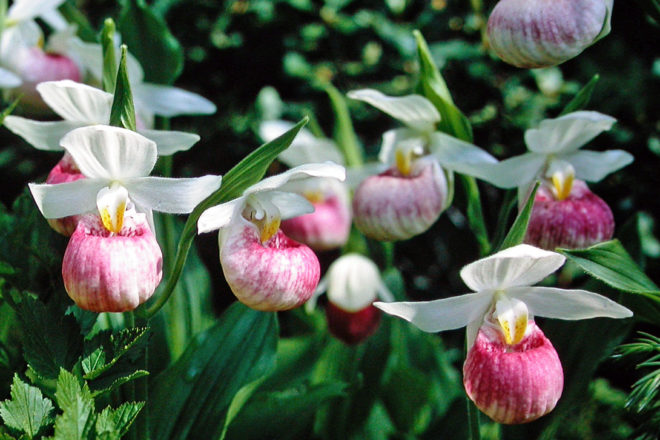 The queen of all is the Showy Lady’s-slipper. Photos by Roy Lukes.

It is thought by many that orchids are to the plant kingdom as man is to the animal kingdom, at the very top. Some botanists list as many as 30,000 or more species of orchids in the world, roughly 10 percent of all flowering plants.

The native orchids of late May and June are a joy to behold in northeastern Wisconsin. With persistence and a little luck one should be able to observe about 22 of the area’s 33 species from the end of May to the end of June. The rest occur during mid to later summer and into fall.

The coralroots, an interesting genus of orchids blooming in early to mid-summer, include the early, striped and the spotted in this region. The early and striped are at their best in the first part of June while the spotted reaches its peak during late June. All are saprophytes depending upon decaying organic matter for sustenance. They lack chlorophyll and consequently are incapable of producing their own food. Their leaves have been reduced through the years to yellowish or purplish sheaths on the stems.

Friday, June 23, 1967 (50 years ago today) turned out to be one of the most important days of my life. The orchid discovery I made that day triggered the start of the formation of certain values and feelings toward wilderness areas. 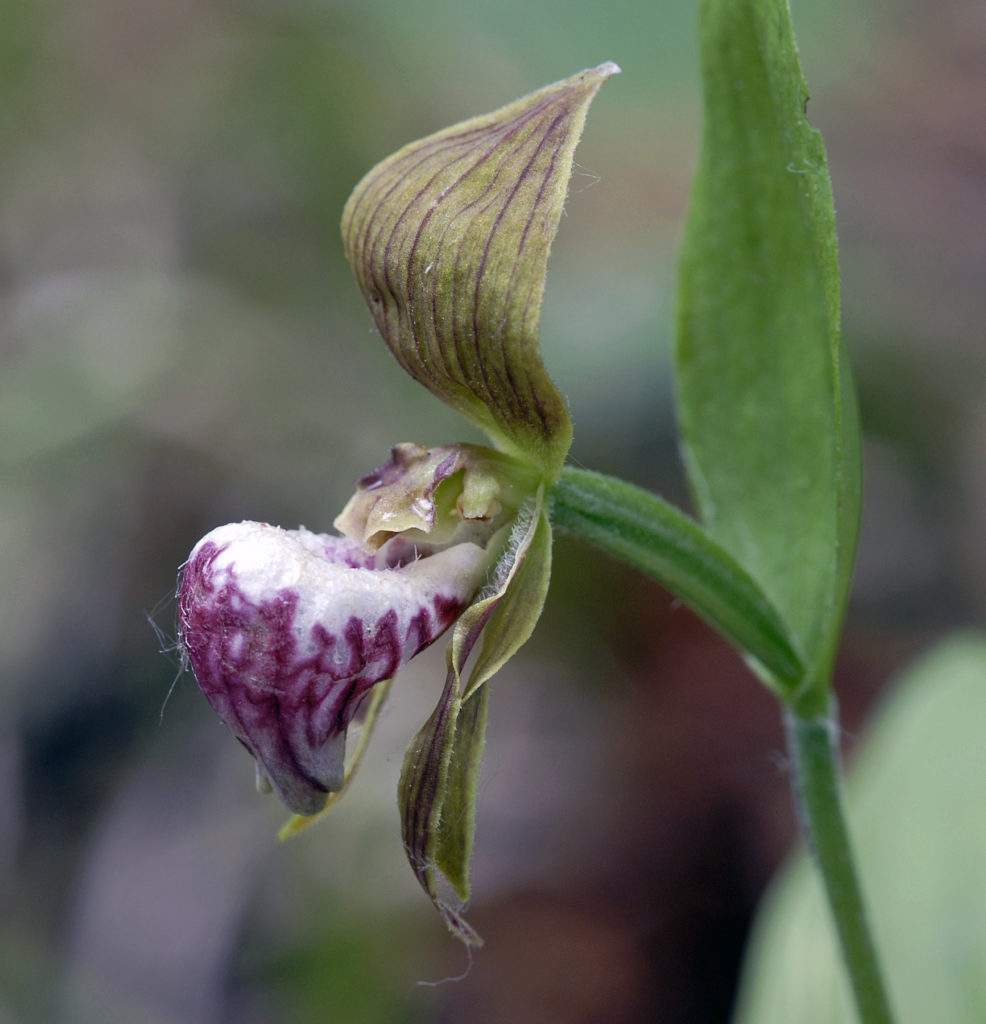 Ram’s Head Lady’s-slippers are quite small and delicate.

Portions of three ridges had been put into use as hiking trails at the sanctuary, where I began guiding in June of 1964. My tour orientations mentioned 17 ridges and invariably brought about the question, “Will we get to see any more than the three, Sandy, Wintergreen and Deerlick, open to hikers?”

It was on a special 17-ridge hike, traversing each one from south to north, in June of 1967 that I discovered an extremely rare orchid, Orchis rotundifolia, now in the genus Amerorchis. It is an exceptionally beautiful rather small flower growing near some pink-flowered Pyrolas.

A number of native orchids found in northeast Wisconsin are quite small or inconspicuous and easily missed on a casual hike. One is the Heart-leaved Twayblade, which can grow with other small plants in mounds of sphagnum moss.

Perhaps the most well known are the lady’s-slippers. They are colorful and very showy. In fact one is named the Showy Lady’s-slipper. Our roadsides in early June can have troops of the Large Yellow Lady’s-slippers blooming at the wood’s edge if you know what roads to travel.

Here is an orchid found growing from Newfoundland south to Alabama and into Texas, west into New Mexico and Arizona, than north up into British Columbia. Perhaps the fact that they seem partial to limestone regions speaks for their great abundance here in Door County. Plant experts feel they are greater in number here than in any other county in Wisconsin.

Actually two rather distinct species can be found in this region. The Large Yellow Lady’s-slipper, (Cypripedium calceolus, var. pubescens) is the most widespread. Its lateral petals, resembling thin twisted or spiraling leaves, are light green or tannish-green. Depending on where they grow, soil, moisture, light, etc., plants can range from three or four inches to over two feet in height.

A high degree of hybridization occurs between these two species, so one must be careful in arriving at a specific variety determination. Satisfy yourself, in most cases, by simply referring to them as Yellow Lady’s-slippers. 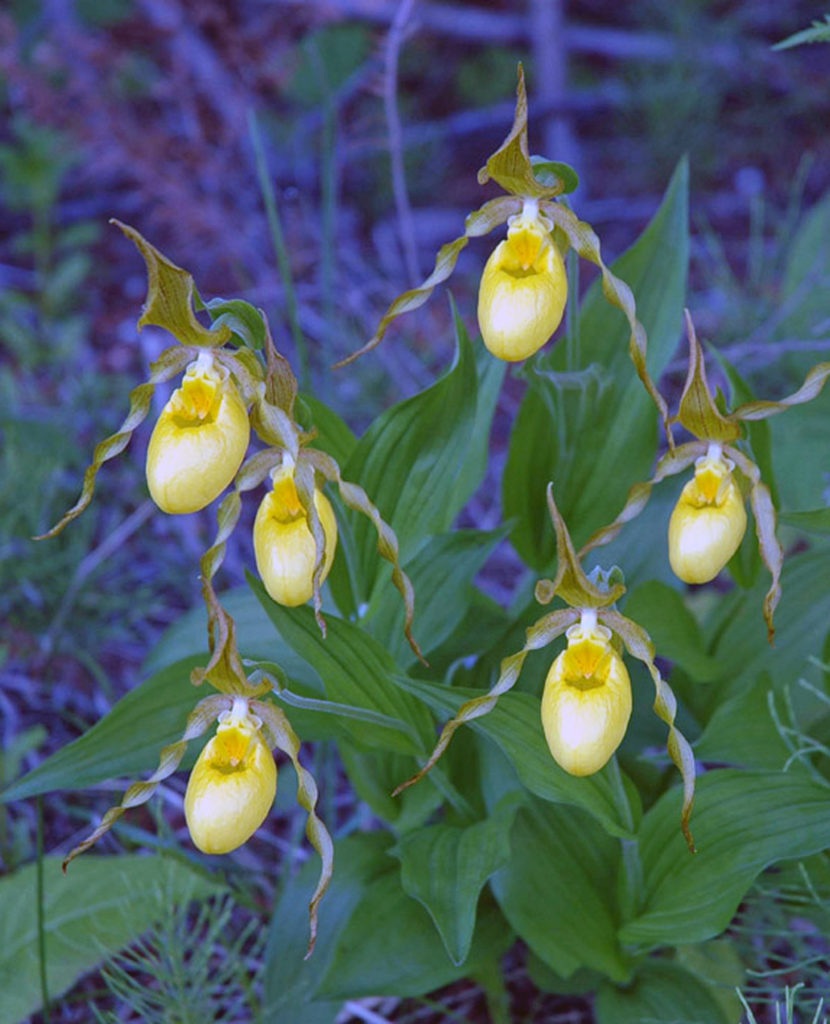 The Large Yellow Lady’s-slipper is the most abundant species in Door County.

There are around 50 species of lady’s-slipper orchids in the world growing from the tropics to the northern boreal regions. Eleven or twelve species grow in the continental United States (there are no lady’s-slipper orchids native to Hawaii, Florida or Nevada). All require plentiful moisture and cool temperatures. Wisconsin has six species while Door County lays claim to five of them. Three of them are of special concern or threatened in the state and two are fairly common and not in danger of disappearing soon.

The large yellow is by far the most common and the small yellow is of special concern in Wisconsin. In all the years I worked at The Ridges Sanctuary I saw very few growing there. Virtually all are the large yellow.

The tiny Ram’s-head Lady’s-slipper, (Cypripedium arietinum) is the extremely rare species in Door County. Elsewhere in the state it’s a threatened species that needs careful monitoring and the strictest habitat management. Fortunately, a very good research project at The Ridges, helped to understand the growth habits and requirements along with the reproduction success of this exquisite and scarce species.

The second most common lady’s-slipper, but never abundant, is the Pink Moccasin Flower or Pink Lady’s-slipper orchid, (Cypripedium acaule). It is the provincial flower of Prince Edward Island in Canada. Provide this plant with perfect growing conditions and it will thrive.

The colorful, tall and robust “queen of them all” is the Showy Lady’s-slipper, (Cypripedium reginae), very fittingly referring to a queen. When I began working at The Ridges Sanctuary in the summer of 1964 this orchid was very abundant. The swale between Wintergreen and Deerlick ridges, for example, had a few hundred growing there, but the largest most spectacular colony, an estimated 400 to 500 plants located between Ridges Road and the shore, grew several hundred yards east of the beach parking lot. Eventually that property was mostly cleared in order for a home to be built, the wet swale completely filled in and the orchids were buried.

What had been chosen by the charter members of The Ridges Sanctuary in 1937 as their official wildflower, emblem and seal, the Showy Lady’s-slipper has been virtually wiped out by development and the extremely difficult to manage deer who love to eat them.

Hopefully the day won’t arrive when people will have to admire only the photographs of the highly coveted lady’s-slippers that used to grow in our county.

Charlotte Lukes will present a slide program titled “Wild Orchids of Door County” on Saturday, June 24, at 1:30 pm in the Newport State Park Nature Center. This will be in honor and memory of her husband Roy Lukes, who passed away a year ago. The program is free but a vehicle sticker must be purchased to stay for the program.