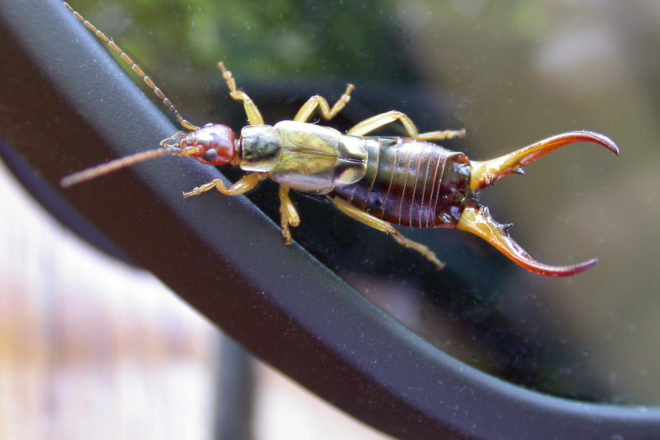 This fearsome male European earwig was found resting on my sunglasses. Photo by Charlotte Lukes.

An insect that first appeared in Door County around 1986 is not leaving. It hides during the day but is quite active at night. It is the European earwig, Forficula auricularia. They were first spotted along the western Great Lakes in the mid-20th century and have spread quite rapidly across the state.

Around 1,000 species of earwigs exist in the world, 30 different kinds in Europe and at least 15 in North America. Fortunately, most are confined to the tropics. The largest, two inches long, lives in Australia.

Our first mention of them came from our plumber more than 25 years ago when he suggested we install a tight-fitting insect-proof cap on our outdoor well pipe. He told us it was not uncommon for earwigs to hide in this dark, damp place during the day and that their falling into the well and drowning could increase the possibility of bacterial contamination of the well water.

A number of years ago the daughter of one of our friends told us of the many earwigs at their place and that they were of concern to them, especially to their children. All of the information I was able to glean from my insect and insect-pest books mentioned very little about the control of these stealthy creatures. I did contact the Wisconsin insect “guru” at the time, Phil Pellitteri, for more information.

The word earwig is from the Anglo-Saxon meaning “ear creature,” and it comes from the commonly held but totally false superstition among Europeans for several centuries that they crawl into people’s ears at night and can actually penetrate the brain.

The fact that earwigs are nocturnal has also led to various other commonly held beliefs. For example, much of the damage gardeners have seen inflicted upon their plants, actually by other insects, has been blamed on the much-despised earwigs. They are omnivorous feeders and are known to eat aphids, various larvae, small snails, mites, fleas and insect eggs, as well as upon dahlias, marigolds, lettuce, potatoes and hostas.

Pellitteri likened them to goats as they are known to indulge in a wide variety of foods. A study regarding aphid problems in oat fields in England led to the discovery that earwigs were actually quite beneficial to the farmers.

What upsets so many people about these insects is their “evil” appearance. Fearsome pincer or caliper-like cerci (SIR-see) on the end of their abdomens are enough to excite nearly anyone’s imagination. No, they will not chase after you and pinch you until they draw blood. Yes, the cerci of a ¾-inch-long adult are capable of giving you a good pinch if you put your finger between them, but they will not break the skin.

One thought is that their “forceps” are used to capture insects and hold them while eating these victims. When alarmed, they may move the cerci forward and over their head. Males are known to use them while fighting other males during courtship. Males’ cerci are strongly curved and longer, while those of the females are shorter and straighter.

We found some earwigs during the day hiding in bluebird nest boxes. Practically any confined space, especially if it is moist, will be used by earwigs for hiding during daylight hours. Shaded areas, abounding in lush plant material, mulch, boards, flat debris, wood chips, firewood or tree bark lying on the ground are much to their liking.

What leads one to believe they’ll be around for a long time is the fact they can withstand temperatures of 30 below zero. Like so many other plant and animal species that have been spread throughout the world, earwigs have simply been commerce-borne from their native Europe to North and South America, New Zealand and Tasmania. Entomologists assure us that they are destined to become cosmopolitan.

Modifying your shady yard to one that has some dry, sunny areas with fewer hiding places for earwigs is one way to control their numbers on your property. Earwigs are attracted to and can be trapped in old tuna fish cans baited with fish oil or vegetable oil, or in rolled up newspapers or dark plastic tubing laid upon the ground in your problem areas. Check traps each morning and simply shake the live insects into a pail of soapy water to kill them.

Earwigs will invariably enter homes, not necessarily in search of food but rather for hiding places during the daytime. Having obtained access, for example, to your kitchen or basement through a few tiny cracks or crevices around windows or doors, at the junction of the siding with the foundation, or through the tiniest of openings around your outdoor faucets, they are now trapped and cannot find their way back outside. Caulking these cracks and crevices must be done to keep the earwigs outdoors.

Individual earwigs found indoors may be vacuumed or killed by hand. Many indoor spray cleaners will kill individual insects, but sealing or caulking openings is a more effective and permanent approach. It should be comforting to realize that earwigs are not known to breed indoors, so continual problems suggest constant migration from the outside.

Similar to house sparrows, starlings and Queen Anne’s lace, which all arrived here from Europe along with many of our ancestors, earwigs are here to stay.