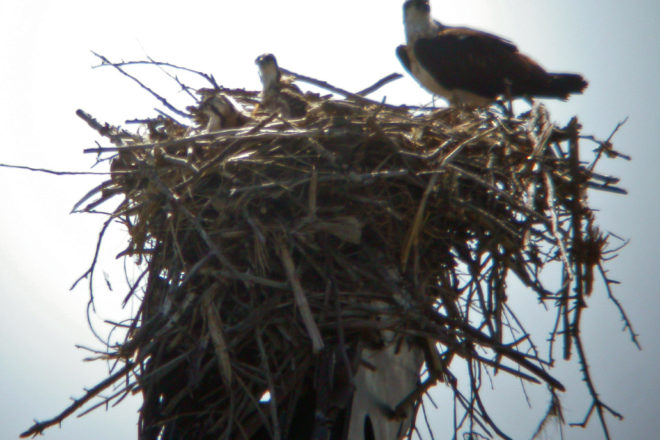 An osprey built a nest and had two young atop an old abandoned crane in a field in Southern Door.

During the last 15 to 20 years we found osprey nests in many places that never had them. Nearly every tall cellphone tower or other similar structure had an active osprey nest near the top. Now many towers have no activity.

A nest that had occupied the Plum Island Lighthouse was taken down. Friends who are avid birders say they are seeing fewer ospreys now than just a few years ago. In fact a good friend living on Washington Island said that she saw her first one of the season on July 8.

The DNR began erecting nesting platforms in the late 1970s, which helped northcentral Wisconsin osprey populations. As the bald eagles increased to the record numbers we have today, they have displaced some ospreys.

The fact that eagles do not migrate and the ospreys do gives the latter a disadvantage. Both also eat the same diet of fish, so eagles, which are larger, can take over a feeding area and create a problem for the ospreys.

Cell tower owners were discouraging birds from building nests as they can cause shorts and limit access to towers when young are in the nest. If repairs were necessary nobody could climb the tower as the ospreys would defend the nest from any intruders.

So, a little research has answered the questions about fewer ospreys being seen in recent years. But let’s look back to earlier days to learn more of the history of these magnificent birds. 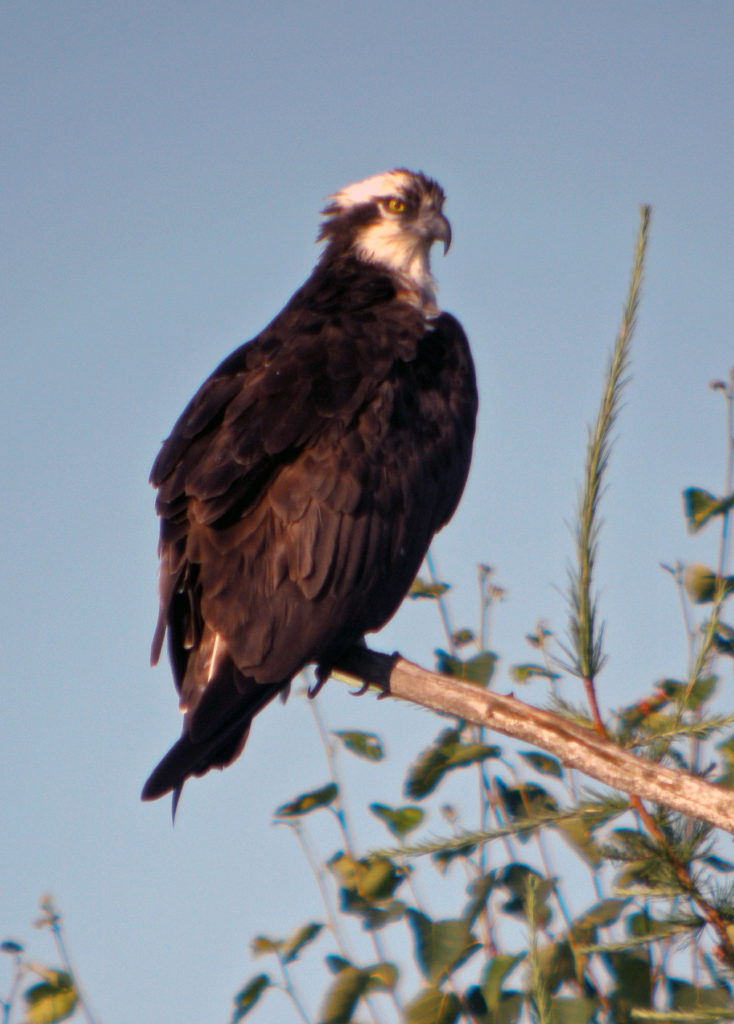 A resting osprey shows its black and white head pattern and overall dark brown wings and back.

A success story began to unfold in the mid-’90s when a few osprey nests were found in close range to the Lake Michigan shore. Since fish are the major food source their nickname was “fish hawk.”

A nest that was active for many years at Toft Point was high in a dead tree. As we hiked the main trail we could hear complaining notes coming from the female atop that tree. She did not like any human being to be within sight of her nest. Eventually a strong storm destroyed the nest and much of the tree.

Ospreys were sighted fairly regularly during the summers dating back to around 1980, but not their nests. By 1994 at least one nest was discovered. Judging by the size of the structure and the numerous sightings near the Baileys Harbor area we suspected it was their second successful year of nesting.

Year after year we came up empty-handed after searching for their nests in wilderness-type areas such as the Mink River watershed. It appeared by 1994 that there was more than one nest along the Lake Michigan shoreline of the Door Peninsula, hopeful for a yearly increase.

Sam Robbins mentioned in his book Wisconsin Birdlife, that ospreys have for many years been considered to be uncommon migrants – uncommon summer residents in the north and rare summer residents in central Wisconsin. The largest concentration up to 1955 was at the Rainbow Flowage in Oneida County, where there were 25 nesting pairs. By 1970 that number had dwindled to only four pair. None were ever found in Door County in the 1960s.

Only one-third of active nests in Wisconsin were producing young in 1969. The nationwide ban on DDT in 1969 eventually turned the tide back toward improved nesting, not only for the ospreys but for other species of birds as well.

One factor very detrimental to the nesting of ospreys that continues to get worse is human occupation of the shores of small lakes throughout the state. Consequently these birds are forced to use the more isolated shore areas for their nesting. It has been found that the construction of artificial nesting platforms where suitable large trees, such as white pines, no longer exist has helped considerably in attracting ospreys.

A favorite vacation spot that we visited almost every summer is the Seney National Wildlife Refuge in the eastern Upper Peninsula of Michigan. This vast wetland is home to many eagles and ospreys and is a natural place that provides seclusion with plenty of food.

The osprey will usually have two to three eggs and they are incubated only by the female for about 35 days. The young should be off the nest by late July to early August. Their wingspan can range from 4½ to 6 feet and appear strongly curved in flight, flexed at the wrist joints.

These picturesque birds display a deliberate flight, slow and heavy wing flapping at times, soaring dives at others. There is little wonder this expert “angler” has also been given the name sea eagle or fish eagle.

The osprey’s white undersides, black wrist patches as seen from below, white top of the head and throat and dark brown topside are clearly recognized field marks. Add to these the bend in their wings and leisurely flight and you will find the osprey is easy to identify, even at a considerable distance. 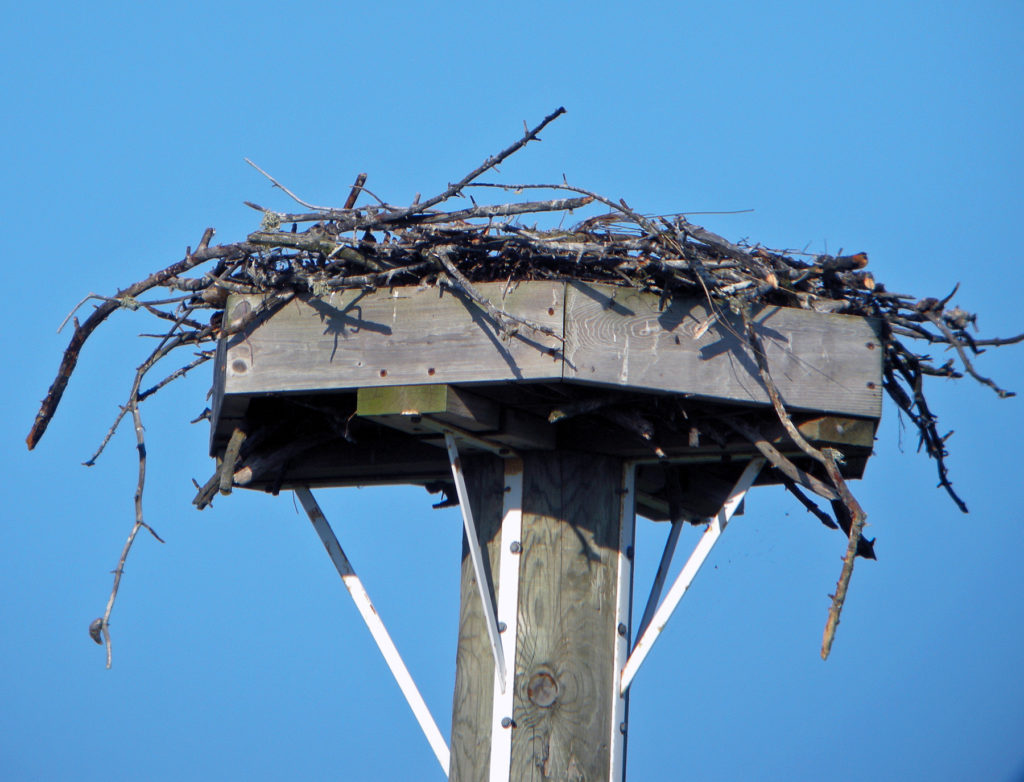 An osprey nest on an artificial platform at the Seney National Wildlife Refuge contains many substantial dead branches.

Few other birds of prey are likely to be as impartial about where they build their nests. A sufficient supply of fish nearby plus security are the prime requirements of the osprey.

There are some cases of ospreys becoming relatively tame and conditioned to the presence of people, but generally they prefer solitude. We have seen their nests built upon navigational buoys surrounded by water in Florida. However, given a choice, I am sure they prefer tall trees where available, along with a good supply of dead branches for nest construction.

In fact, as absurd as it may sound, this raptor has been known to inadvertently protect young chickens from other hawks. A pair of ospreys nesting near a chicken yard – being extremely protective of their territory – will, instead of attacking the chickens, drive every other hawk away from the area.

“Snowbirds” from this region surely enjoy watching ospreys in many parts of the South, especially Florida. Two areas that provided us with phenomenal views of these beautiful birds were Sanibel Island, southwest of Fort Myers, and Cedar Key along the Gulf west of Ocala. Be sure to bring cameras with good telephoto lenses for capturing their images in flight.

How we rejoiced over the return and successful nesting of ospreys to northeastern Wisconsin. Let’s hope they can find good nesting sites and that numbers will increase again.