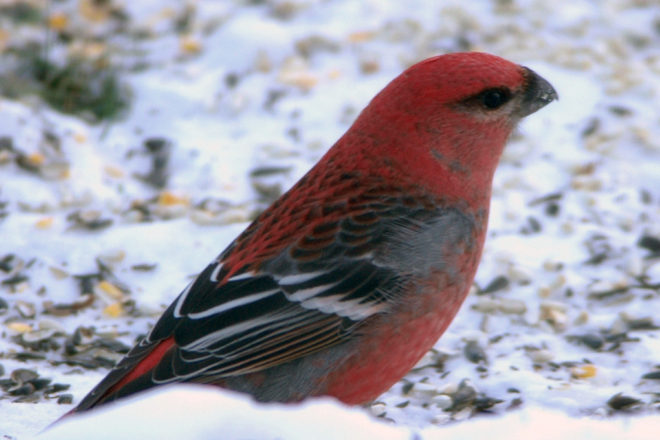 Some of the winter birds I am especially fond of are those whose appearance is always unheralded. Their arrival in the area is an unexpected surprise. A great favorite of mine is the pine grosbeak. A small flock of these large, robin-sized finches came out of the cold blue sky to my parent’s yard in Kewaunee on Dec. 30, 1961, my first sighting of these handsome creatures.

These round-the-northern-world, or Holarctic, birds spend most of the coldest months within much of their vast Canadian breeding range. It is only during winters of severe food shortages that these seed-eaters migrate farther south. They tend to be very gregarious at this time as they search for their favorite foods, including seeds of pine, ash, mountain ash, highbush cranberry, crabapple (a favorite), sumac, red cedar, snowberry, maple, serviceberry, juniper and lilac.

Its genus name, Pinicola (pi-NICK-o-la) indicates its preference for pine woods. Enucleator (ee-new-klee-AY-tor), its species name, reflects its skill at extracting kernels from seeds, some being inside fleshy fruits such as apples. I have photos of these birds whose beaks are humorously decorated with the flesh of ornamental crabapples. It’s the seeds the birds are after, not so much the flesh.

However, the red color of the flesh of some of the wild fruits this bird eats is apparently important in producing the rich rosy red coloring of some of the male’s feathers. It is thought that the bird synthesizes red pigment from, for example, highbush cranberry or crabapple fruit. If the male pine grosbeaks were placed in captivity and fed a normal confined bird diet they would lose their red coloring. Male cardinals kept in captivity by our friends, the Koenigs of Sauk City, Wis., while the birds were being doctored back to health, lost their red coloring. I also wonder if the lack of natural sunlight may be a contributing factor.

The habit which impresses me about pine grosbeaks is their apparent lack of fear of people. They are called “mopes” in Newfoundland and described as being stupidly tame as they sit quietly and move slowly. 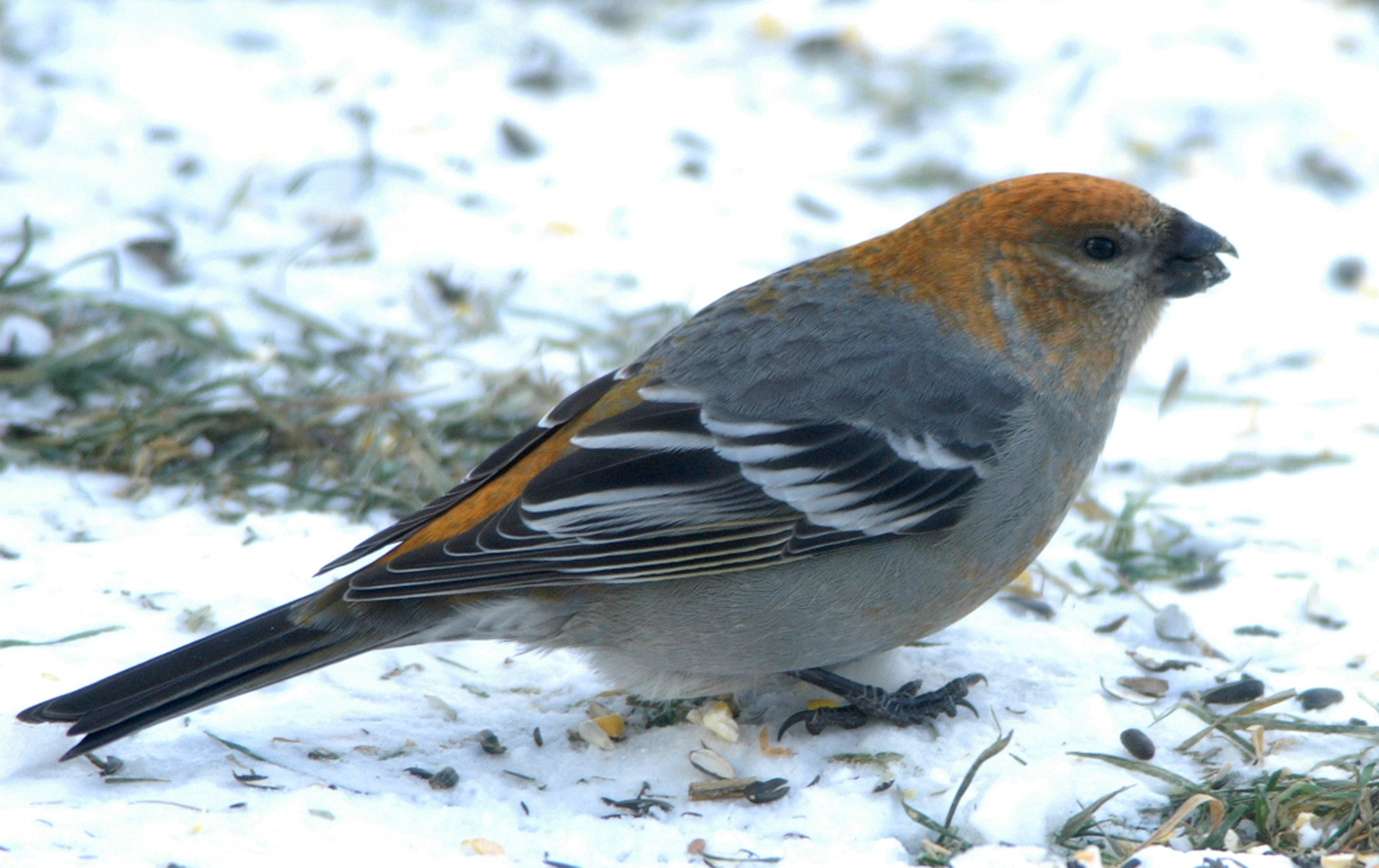 Years ago a friend living near Fish Creek called to tell us he had one trustingly and fearlessly eating seeds from his hand. Another friend recently was the first to report seeing a pine grosbeak last fall in Peninsula State Park on Nov. 26. Some were seen Nov. 27 on Washington Island and the only other reports were from the Dec. 16 Christmas bird count on Washington Island and the Brussels Christmas bird count on Dec. 17.

Undoubtedly it is common for a flock of pine grosbeaks to breeze into someone’s yard, perhaps attracted there by the activity of other birds at the feeders, and see human beings for the first time in their short lives. They have no more fear of these people than the birds had of moose or deer or other large mammals in their Canadian nesting environment far away from civilization.

These birds are strictly arboreal (inhabiting trees) and are just as well known to people of northern Japan, Siberia, Russia and Scandinavia as they are to Canadians and Americans. Their summer home on this continent is the vast evergreen forest, primarily spruce, stretching from Maine to Alaska.

Pine grosbeaks are the largest of the grosbeaks, about one inch longer than the familiar evening grosbeaks. It is their long black tails that give them the edge in length. Look for the narrow white wing bars, stubby dark bill and a grayish robin-sized bird.

The young nearly always outnumber the adults. They are gray like the adult females. Young males sometimes exhibit rusty to brassy-orange rump patches and similar coloring at the back of the head and neck. Both young and old females have more or less light yellowish-olive on their rumps and backs. Adult males are rosy-red on their heads, breasts and backs.

Their call, “TEE-TEE-tyou, TEE-TEE-tyou” consists of two or three high-pitched musical whistles on a descending scale. It is a very gentle, pleasant sound.

Their beauty and song help to temper the icy edge of Old Man Winter. Read over their favorite plant list. Consider especially highbush cranberry, mountain ash and flowering crab such as the “Radiant,” with its long-lasting fruits. Plant them this early May near your home so that in future years when the pine grosbeaks grace the winter landscape here, plenty of natural food will be available for them.

People as a whole are quite helpless to halt the slow, steady, cancerous-like increase in human population growth and “progress,” both directly related to and responsible for the ruination of much of the natural landscape, plants and animals.

On the other hand if every family would plant several food-producing trees or shrubs, attractive to birds, we could help them tremendously – and enjoy the birds at the same time!

Indeed, we have reached a point in time where we all are going to have to become seriously involved in restoration ecology. This is a good example of how you can begin changing your lifestyle by helping wildlife. Here’s hoping your happy new year will be complete with pine grosbeaks!