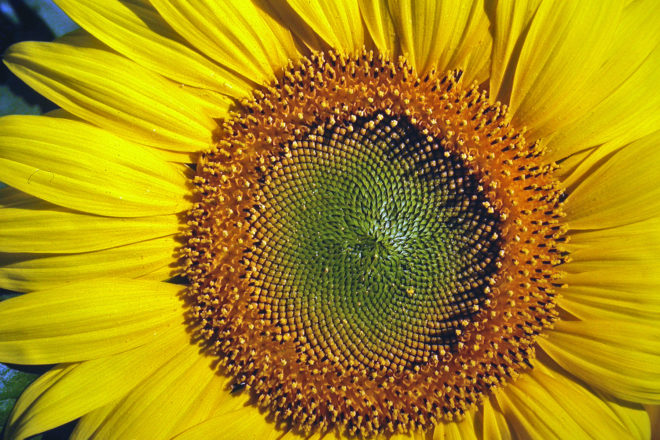 The concentric spirals of seeds forming in the sunflower are easy to see in this close view. Photos by Roy Lukes.

United States history tells us that a symposium was established in the 1890s for the purpose of choosing the most suitable blossom to become our national flower. Two recommendations that rated highly in the study were the cardinal flower and the columbine. The sunflower was also included on the list.

What do you suppose ever possessed that group to propose the corn tassel as our national flower? Obviously that unlikely candidate among all the other favorites never was accepted. It took a long time, until 1986, for the rose to become our national flower.

I still feel the sunflower should have been the top choice. Examine this radiant sunshiny plant from all angles and I think you’ll agree that it would have been an excellent candidate for the national distinction. In the first place it’s the only native North American crop valued as a food source on a worldwide basis. What a spectacular ornament this plant is, growing as either a showy garden annual or one of many species of perennial wildflowers to be found in various habitats, marsh to desert, from sea level to more than 7,000 feet in elevation.

I wonder if the Greeks of hundreds of years ago could have thought that two of their words, helios (the sun) and anthos (a flower), would someday be combined to form a word describing one of the warmest, most radiant sunny plants known to man, Helianthus, the sunflower. Birds and other wildlife crave the meat of their seeds.

One of the largest and most commonly cultivated species of today, H. annuus, originated in Peru. It is not known in the wild state in this country. Early historians described it in Madrid in 1567, apparently brought there by explorers returning to Spain from the Americas. Today this plant of the sun is the floral emblem of Peru and the state flower of Kansas. Henry Ward Beecher summed it up well when he said the sunflower is “plain, honest and upright.” Perhaps that’s what the citizens of Kansas had in mind when they chose it to be their state flower.

Experts list 67 species of sunflowers, with many varieties or races, most being confined to America. They hybridize readily and, as a result, many fascinating and beautiful cultivars have been developed in recent years. Surely many of you have learned from experience, they are easy to grow, are not fussy about soil, require little attention and make wonderful cut flowers.

A sunflower in reality is a whole bouquet of flowers called a “head.” Wild as well as garden- and field-grown species belong to the gigantic composite family containing among others, dandelions, daisies, asters, goldenrods and one really noxious weed, the ragweed.

The sunflower head is a collection of disc flowers. Imagine what a flat round disc looks like, such as the flat-looking round sun in the sky. Now you can see why the central part of the sunflower is said to be made up of disc flowers. Each is a tubular five-lobed corolla called a floret. By early fall many will have been pollinated and be developing into ripening seeds.

Only these florets situated around the outer edge have what appear to be petals and are referred to as ray or banner flowers. They are sterile and serve as attention getters. This gaudy ring of banners performs like a circular billboard doing all the advertising to lure insects to the hundreds of small florets in the large head. 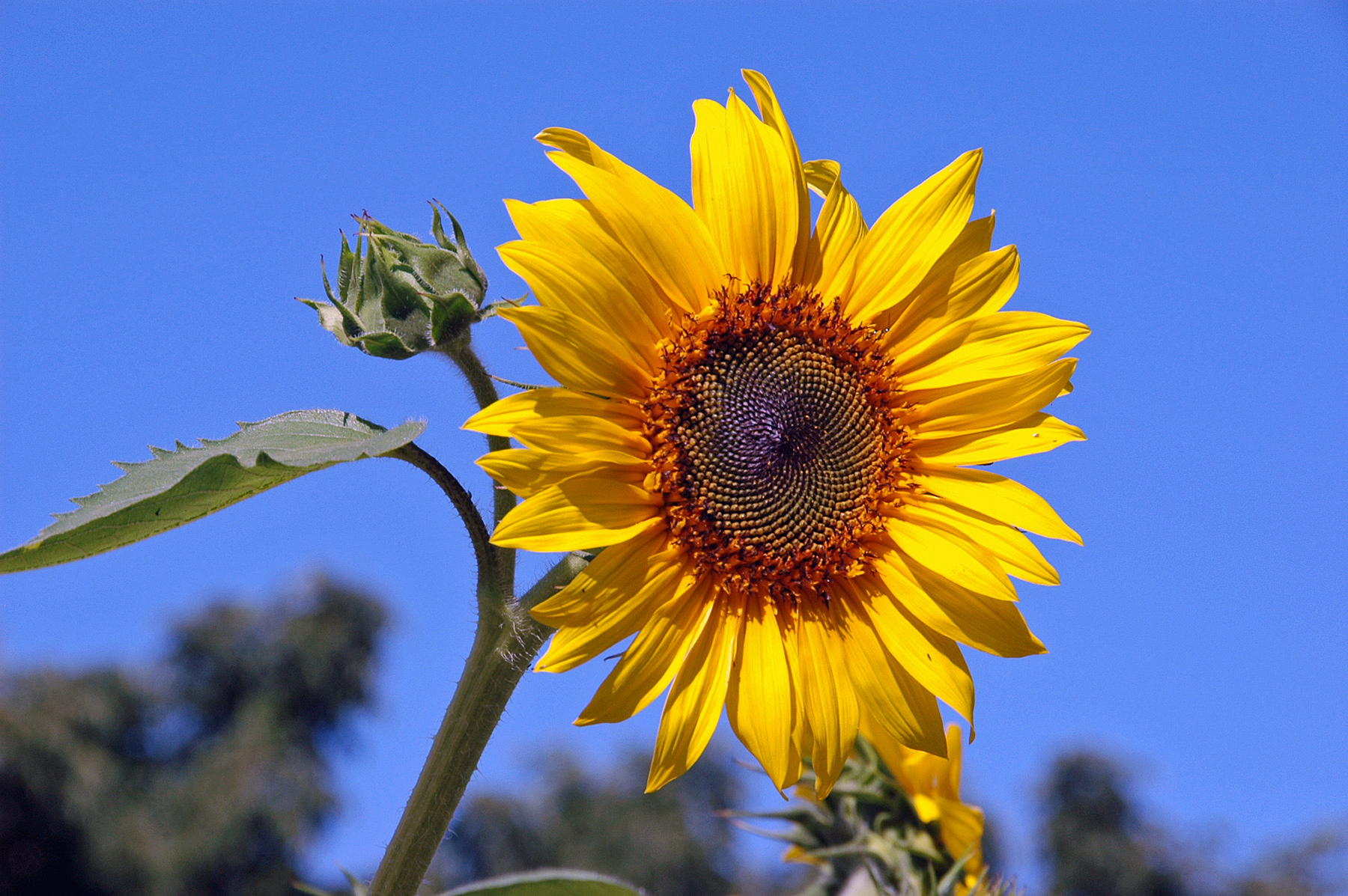 A golden-yellow sunflower against a blue sky is a thing of beauty.

This is a perfect example of economy in nature whereby only a minimum of the plant’s energy is expended in attracting insects. The greater part of its strength goes toward seed production. One wonders how many people would grow sunflowers if the plants did not include the cheery sunburst display of showy, flat, triangular banner flowers.

The greatest of people, in my estimation, ever to inhabit the face of the earth, the North American Indians, made considerable use of the sunflowers. They used the seeds for eating, flour, oil for their hair and for cooking, the flowers for yellow dye, the dried stalks for fuel and the ashes as fertilizer.

Sunflowers are of considerable economic importance to the countries of Russia, India and France and are finally receiving more attention in the United States, their native country. Our favorite way of eating the seeds is raw like peanuts, as a substitute for nuts in cookies, date and banana bread, and mixed in, along with date crystals or date sugar with our morning oatmeal.

It is known that the protein content in its seeds is nearly as high as that of beef steak, and higher than all other vegetable seeds. Some people claim they are beneficial for eyesight, complexion and blood pressure. The oil, used in salads and cooking, is a good source of unsaturated fatty acids. One health expert says they are miniature sunlamps in your digestive system.

Search the entire flower kingdom and I don’t think you will find another plant having such a perfect combination of fine attributes, beautiful to look at, highly nourishing as food, useful in various ways, native to this country, can be grown in every state, associated with the all-important sun, and symbolizing the great importance of conversion to the use of solar energy.