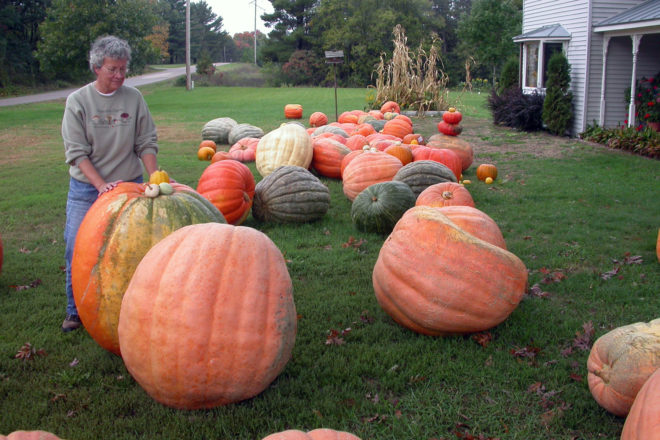 Charlotte stands next to one of the large pumpkins on the lawn. Photos by Roy Lukes.

Do you enjoy eating Cucurbita pepo pie (kew-CUR-bi-ta PEEP-o) as much as we do? I’m speaking of that famous Thanksgiving treat, pumpkin pie. Our annual Thanksgiving feast enjoyed with good friends would be incomplete without a scrumptious homemade pumpkin pie.

In thinking back to my childhood in Kewaunee, I do recall having pumpkin pie for Thanksgiving but know that my dad never grew his own pumpkins. Apparently they took up more space than he could afford in his very large, but carefully planned, vegetable and flower gardens. Matter of fact, I can’t remember dad ever planting squashes, other than some zucchinis.

I recollect the victory garden days of World War II, beginning when I was in the sixth grade. We were given some zucchini squash seeds to plant during the summer of 1943, and that event undoubtedly triggered my fondness for squashes of all kinds.

Our friend Carl Scholz told us that a single zucchini squash plant can produce more edible weight than any other vegetable. Surely you too have had a few of these fruits accidentally hide beneath the huge leaves, and by the time you discovered them they were nearly large enough to be hollowed out and used as canoes. 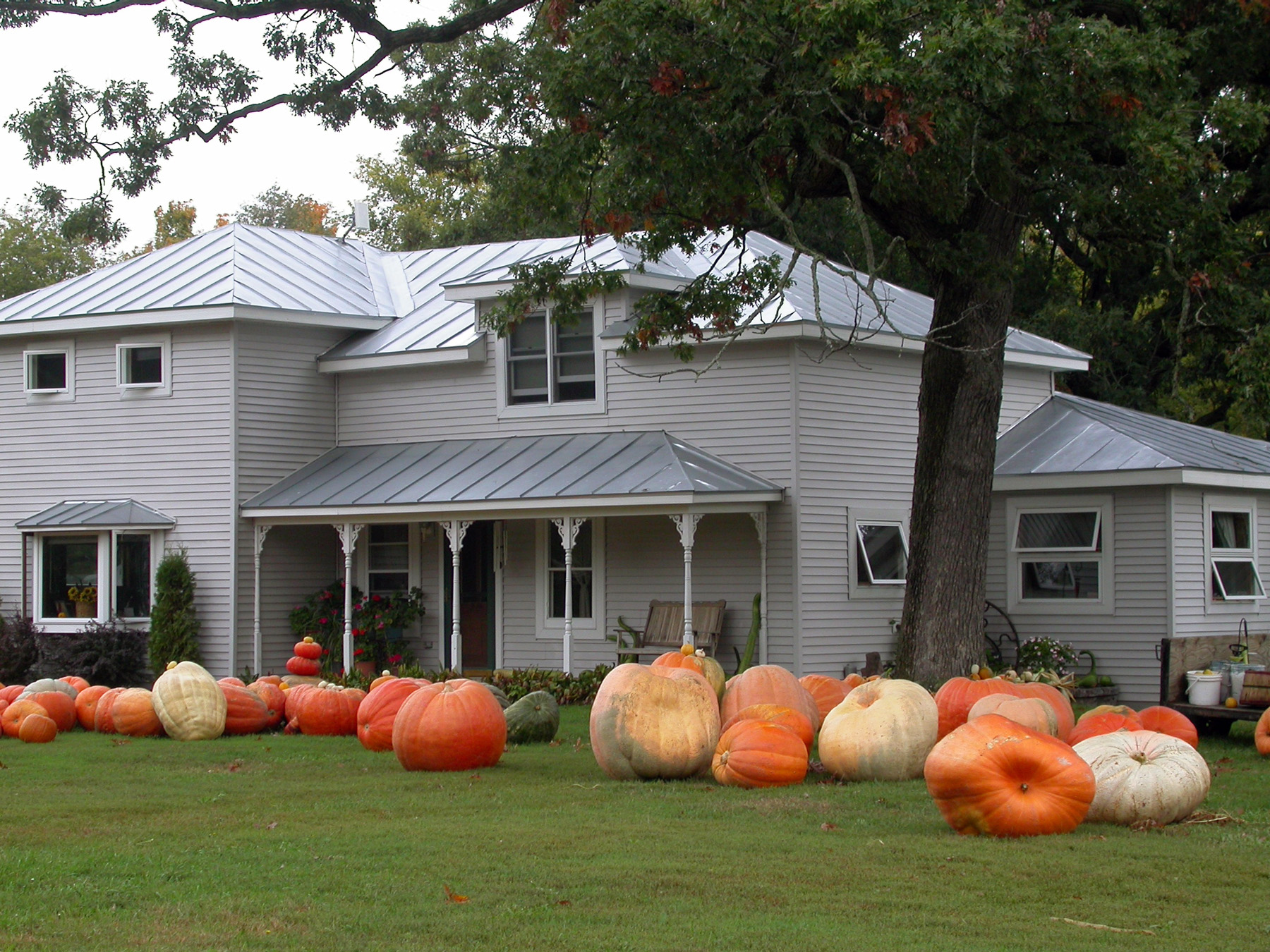 A harvest of great pumpkins at a home near Waupaca will be made into a special Halloween display.

Notice that I referred to the zucchini squash as a fruit. A fruit of any of the many gourd species is technically a large berry. Actually blackberries, raspberries and strawberries, for example, are not berries but rather drupelets. However, can you imagine calling them strawdrupelets or raspdrupelets? Neither can I! Typical true berries are the currant, blueberry, cranberry, grape, tomato, eggplant, pumpkin and squash.

Squashes belong to the gourd family and are in the genus Cucurbita, which is Latin for gourd. Generally they are annual, tender, trailing or climbing vines of about 10 species. As was mentioned previously, the species, pepo, is the beloved pumpkin of crisp, sunny autumn days and jack o’lantern nights. Intriguing variety names, among many dozens, include:  Ghost Rider, Big Moon, Spirit Hybrid, Trick or Treat and Jack Be Little.

Several years ago Charlotte and I enjoyed a few days of camping at Hartman Creek State Park near Waupaca, Wis. While exploring the surrounding area we drove past a home on a country road where the front yard was full of giant pumpkins. We learned later that this home features a fantastic lighted display every year for the Halloween season that attracts people from miles around.

It was Ron Wallace, from Greene, Rhode Island, who grew the world’s heaviest pumpkin in 2012. By the way, Rhode Island has become well known and respected in the world of giant pumpkins. Wallace brought his entry to the Topsfield Fair in Topsfield, Massachusetts on Sept. 28, 2012, where he was crowned the champion with his 2,009-pound pumpkin. That’s more than one ton!

Through the years there have been pumpkin geneticists who’ve developed seeds, including Goliath Giant and Atlantic Giant, that can be grown to produce the giant champions. In general the 10 factors that have to be taken into account in order to grow the “big ones” include:  super soil, great genetics, early indoor start, lots of fertilizer, plenty of water, liquid calcium, promoting secondary root growth, controlling insect and pumpkin diseases and shading the fruit. By the way, at the very peak of growth a pumpkin can grow 40 to 50 pounds a day, or more!

I learned from the University of Illinois Extension that the references to pumpkins date back many centuries. The name pumpkin originated from the Greek word for “large melon” which is “pepon.” “Pepon” was nasalized by the French into “pompon.” It was the English who changed pompon to pumpion. Shakespeare referred to the pumpion in his The Merry Wives of Windsor. Finally it was the American colonists who changed pumpion into pumpkin. Most of you know that pumpkin is referred to in many tales, including:  The Legend of Sleepy Hollow, Peter, Peter, Pumpkin Eater, and Cinderella.

People have been fashioning jack o’lanterns at Halloween for centuries. The practice originated from an Irish myth about a man nicknamed “Stingy Jack.” It’s a long story that involves Jack and his many ins and outs with the devil. Eventually, Jack was sent off into the dark night with only a burning coal to light his way. Jack put the coal into a carved out turnip and has been roaming the earth with it ever since. The Irish began to refer to this ghostly figure as “Jack of the Lantern,” and then simply “jack o’lantern.”

In Ireland and Scotland people began to make their own version of Jack’s lantern by carving scary faces into turnips or potatoes and placing them into windows or near doors to frighten away Stingy Jack and other wandering evil spirits. In England large beets were used. Immigrants from these countries brought the jack o’lantern tradition with them when they came to the United States. They soon found that pumpkins, a fruit native to America, made perfect jack o’lanterns.

Charlotte in past years made a “pumpkin” pie out of a Wisconsin Mooregold squash, one of our favorites, that was developed by the former horticulturist at the University of Wisconsin, Professor Dewey Moore. The flesh of the Mooregold squash is quite sweet, very orange and can be made into a mouth-watering pie.

Many members of the famous gourd family are thought to have originated in tropical America, gradually making their way into the Northern Hemisphere. There has been much hybridization making them difficult to trace, but this we can say; squashes are the berries!