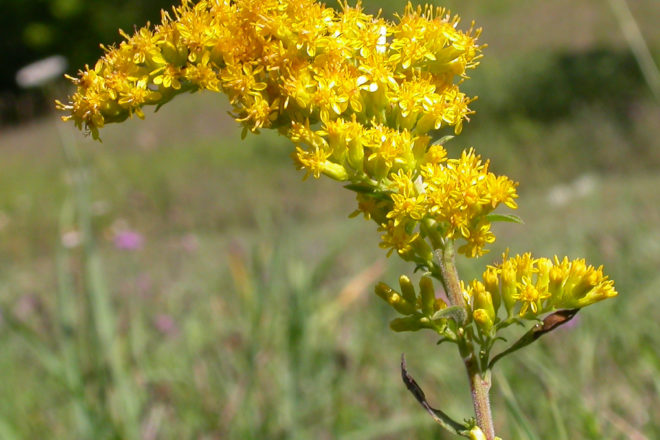 The gray goldenrod, found in open fields or roadside habitats, is easily identified by its single plume that curls over. Photo by Roy Lukes.

Millions of candelabra displays of “sneezing powder” line the miles and miles of disturbed roadsides, ditches and numerous neglected patches of ground and bring misery into the lives of many people.

The ragweeds – tough guys of the weed world – are in bloom. Ironically most people are not familiar with the ragged menace, and point their accusing fingers at the innocent goldenrods instead.

Too many books still claim that goldenrods are good for nothing and are especially bad for hay fever sufferers. Studies of past years have conclusively proven that pollen of goldenrods is too heavy to be carried by the wind. Relatively few grains appear in daily pollen tests conducted by weather specialists.

Studies have revealed that one 12- to 40-inch-tall common ragweed plant, the species in our area, is capable of producing and giving off upwards of one billion pollen grains. The grains do not contain a pollen chemical that causes a sneezing reaction. Rather the grains, as proven by scanning electron microscopes, are ragged and spiny, capable of hooking into and irritating sensitive nasal passages bringing about runny noses, sneezing and watery eyes.

The green, inconspicuous male (staminate) flowers of the ragweed are borne on upright candelabra-like spikes (panicles) at the tips of the plants’ branches. They do not attract insects simply because the pollen is extremely light and easily carried for as many as 400 miles by the wind. It is estimated that around six million pollen grains are shed from one flowering spike on the common ragweed. Estimate the number of panicles on one plant, then the number of plants along the roadside, and you soon are groping for the proper, seldom used mathematical word to describe the total grains of irritating pollen, such as quintillion!

The tiny female (pistillate) flowers are produced in the axils of the upper leaves, which are supported by stiff hairy stems. Surprisingly, robust seeds, rich in nourishing oil, either remain on the plants throughout the winter and are readily available to the birds, or can lie in the soil in a dormant state and still be viable 40 years later. 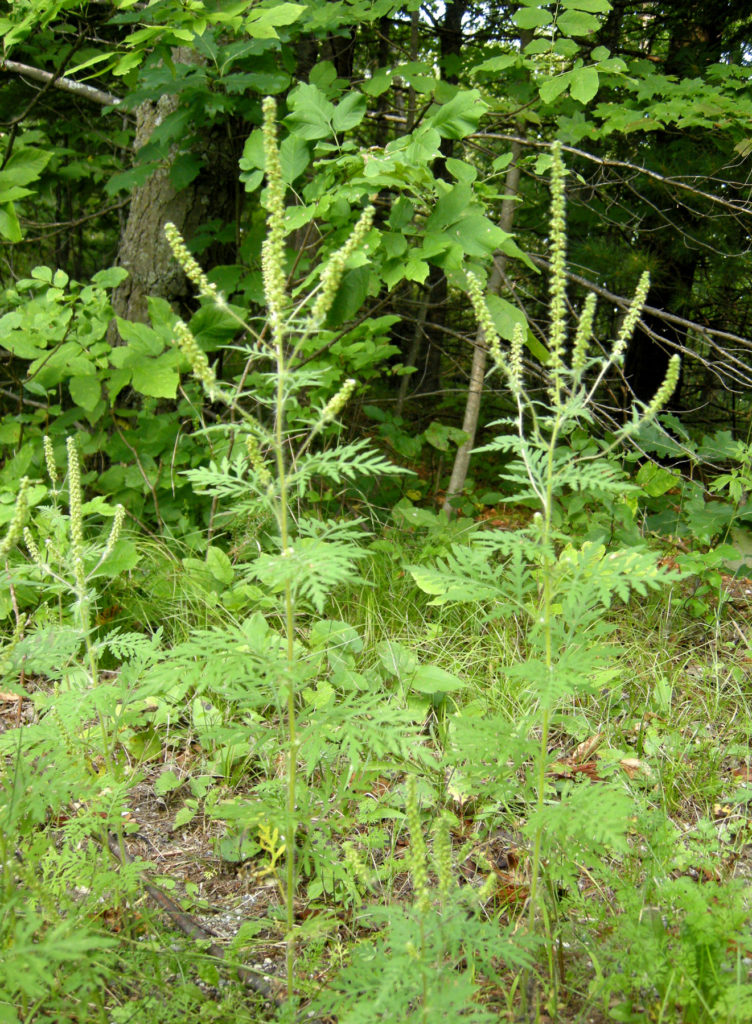 A small plant will produce as many as 3,000 seeds while a large plant will have upwards of 50,000. Interestingly, it has been determined that ragweeds in general are one of North America’s most valuable wildlife food plants. The seeds, referred to as “bird manna,” are eaten by dozens of different songbirds including mourning doves, red-winged blackbirds, song sparrows, dark-eyed juncos, American goldfinches, white-throated sparrows, white-crowned sparrows and common redpolls.

Unlike goldenrods, which are perennials, the short common ragweeds of this region are annuals. They flourish largely due to manmade disturbances including road building and maintenance. They cannot stand competition from other biennial and perennial plants, which will grow next spring from roots already established.

Time after time I walk along the shoulders of roads, where the snowplows and graders have scraped and mowers have cut, and marvel at the profusion of healthy weeds growing exceedingly well due to regular disturbance. Standing in one spot recently at the edge of a blacktop county road I recorded the dandelion, goat’s-beard, white sweet clover, spotted knapweed, plantain, common ragweed, rough cinquefoil, chicory, Queen Anne’s lace, bladder campion, white campion, common mullein and black medic. Beyond the “mown zone” of tough weeds grew a wonderfully dense mat of perennial grasses fully capable of crowding out of existence even the most vigorous and obnoxious of the weed species including the ragweed.

Annual weeds don’t have to be pulled, just cut. Actually pulling or digging them disturbs the soil and promotes even more weed growth. Cutting the flowering annuals, such as ragweed, sweet clover and Queen Anne’s lace before they go to seed, and doing this for two years in a row, usually does away with many of them.

As to the good side of goldenrods, in addition to their great fall beauty, I know of some hillsides and embankments that have been nicely stabilized by expanses of goldenrods. Look at enough different kinds of the 20 or more species in Wisconsin and distinctive differences soon become apparent. The Peterson Field Guide to Wildflowers and especially Merel R. Black and Emmet J. Judziewicz’s Wildflowers of Wisconsin and The Great Lakes Region are very helpful in goldenrod identification. Usually they are grouped into plume-like and graceful, elm-branched, club-like and showy, wand-like and slender, and flat-topped forms.

A point you must consider in studying and trying to identify the goldenrods is that there are regional variations as well as a few hybrids making this a challenging but enjoyable group to work with. Don’t always expect the real-life specimen you are looking at to be exactly like the picture in the field guide.

Four of my favorite species are the zigzag, gray or dyer’s weed, bog and dune. Every woodland in the county surely has plenty of the zigzag goldenrod with tiny yellow florets along its crooked stem with wider leaves. It tends to grow in shady areas while many of the others prefer open sunny fields. The gray goldenrod prefers dry gravelly ditches and fallow fields that were not meant to be farmed. The eight-to-ten-inch plant is easy to identify because of the tendency of its small golden plume to be slightly curled to one side.

One of my absolute favorites, usually growing along the open edges of swamps and other wetlands, is the tall stately bog goldenrod, now listed as a state threatened plant. These deep-red stemmed wildflowers, now in excellent bloom in beach and dune areas, are perhaps the last vigorous blooming plant of the season nearest Lake Michigan. Eight to 10 weeks of glorious goldenrods in one area is nothing to sneeze at!