This singing male red-wing, on territory, displays the red epaulets on its wings. Photo by Roy Lukes.

Some ornithologists say the most abundant bird species in North America is the red-winged blackbird. This was stated a number of years ago and perhaps it is still true, but the European starling, seen recently in great masses along county roads, may come in as a close second.

I subscribe to Wisbirdn, which is a free email “chat room” for Wisconsin residents to post recent sightings of birds in various parts of the state. The red-wings had been moving into southern Wisconsin since mid-February and were seen in Door County by Feb. 27. A friend, Tom Erdman, reported his first red-wing in his yard in Oconto County on Feb. 25. His home is about a half-mile from the Green Bay waters and is about as far north as Little Sturgeon Bay.

The only times a red-winged blackbird had been reported up here before March 1, prior to this year, was in 2002 and 2017. The latest first sighting in the past 17 years was in the harsh winter of 2013-14 when the Great Lakes were nearly 90 percent frozen. That year the first red-wing was seen March 18.

What’s interesting about these easily identified birds is the wide variety of habitats in which they can be found, ranging from freshwater marshes to dry upland sites. Give them some fields, grain stubble and plowed ground and they appear to be perfectly capable of finding plenty of food. Surely today’s highly mechanized harvesting of the various crops like corn, whereby a lot of kernels fall to the ground, has contributed to the red-wings’ increasing numbers. 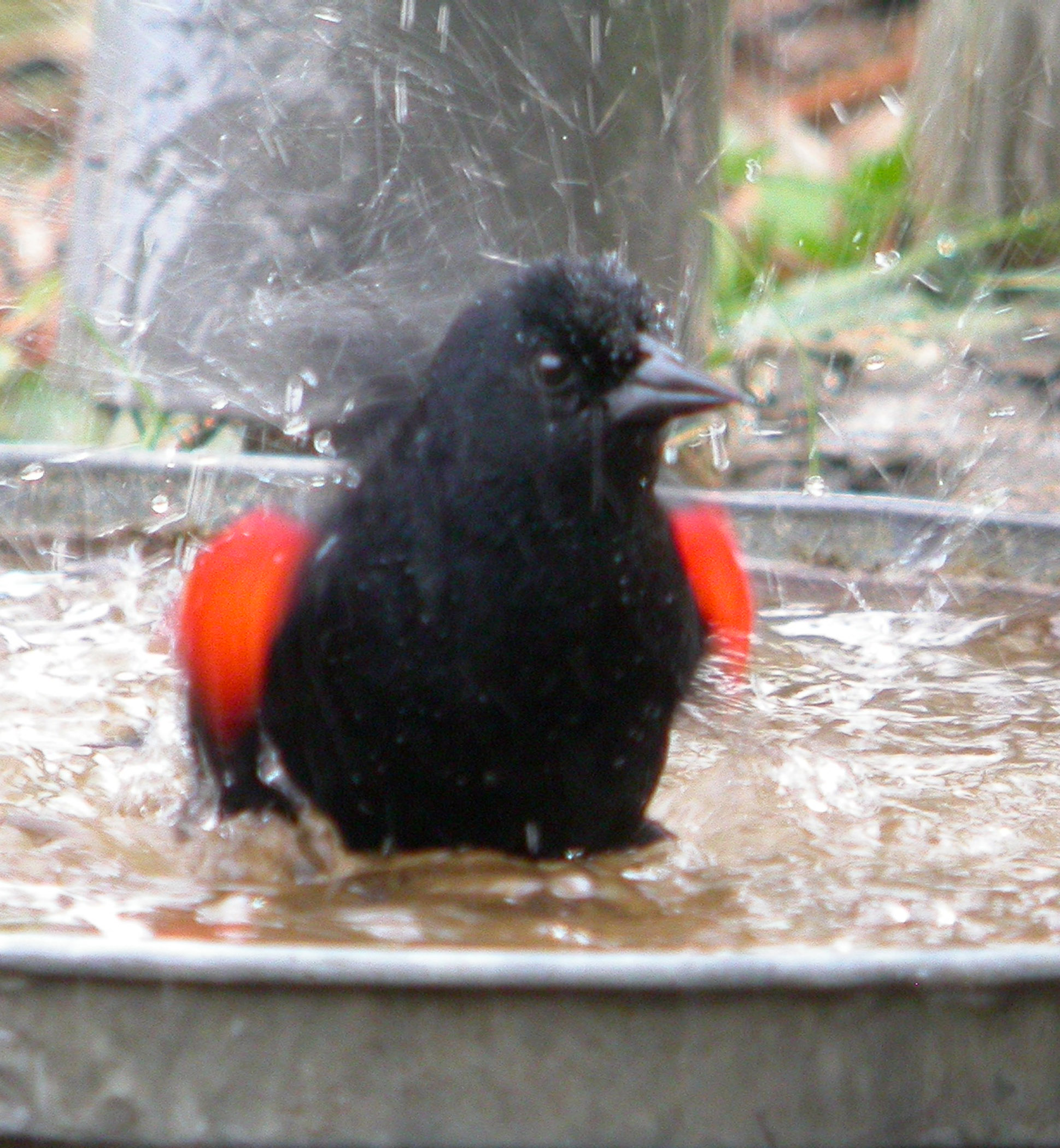 A few of these high-energy creatures, bursting with personality, have nested near our property in past years and would make frequent visits to our front yard. They made good use of the bird baths, sunflower seed feeders and scattered cracked corn. When we accidently scared them away from the feeders they would fly about 20 feet up into a nearby tree and protest our presence with shrill ear-piercing “TEEerr” whistles.

In more than one instance during our nature classes and bird hikes we’ve come too close to an active red-winged blackbird’s nest and were mercilessly dive-bombed and screamed at, non-stop, by the adults until we left the area.

A contributing writer for the Wisconsin Breeding Bird Atlas noted, “If you have ever ventured near an active red-winged blackbird nest, you have experienced a ‘close encounter of the bird kind’ with this pugnacious species; and who among us does not marvel at the vast numbers of red-wings streaming into and out of a fall roost?”

This first Atlas, which we both worked on in the late 1990s, indicated that red-wings, along with other species such as the American robin, song sparrow, blue jay and American crow, unerringly nest in every county and almost every township in Wisconsin. Observations of nesting activity throughout Wisconsin are in the third year for the second Breeding Birds Atlas project.

The early arrival of red-winged blackbirds in the state follows this cold, but relatively below normal snowfall winter. Recent warm weather reduced the snow to nearly zero in the open fields but the deep woodlands still retained a solid cover and the storms of winter are not yet over. In fact as I write this we are getting a nor’easter, heavy snow with strong winds out of the northeast. (I received 10 inches of snow from that storm.)

We always enjoyed the first spring songs of returning red-wings. The male’s strong robust “o-ka-LEE” rings out over the fields and is a signal that territorial activity is beginning. The males usually come back a week or so before females so there is quite a bit of competition for breeding areas as spring progresses.

Few people realize the importance of songs of birds, but fewer know that the male red-winged blackbirds combine their songs with marvelous displays of their colors. Call it a song-spread display. Watch a male red-wing sing and you will note that his head is thrust forward, tail and wings lowered and his red shoulder patches, called epaulets, tend to enlarge and puff up. 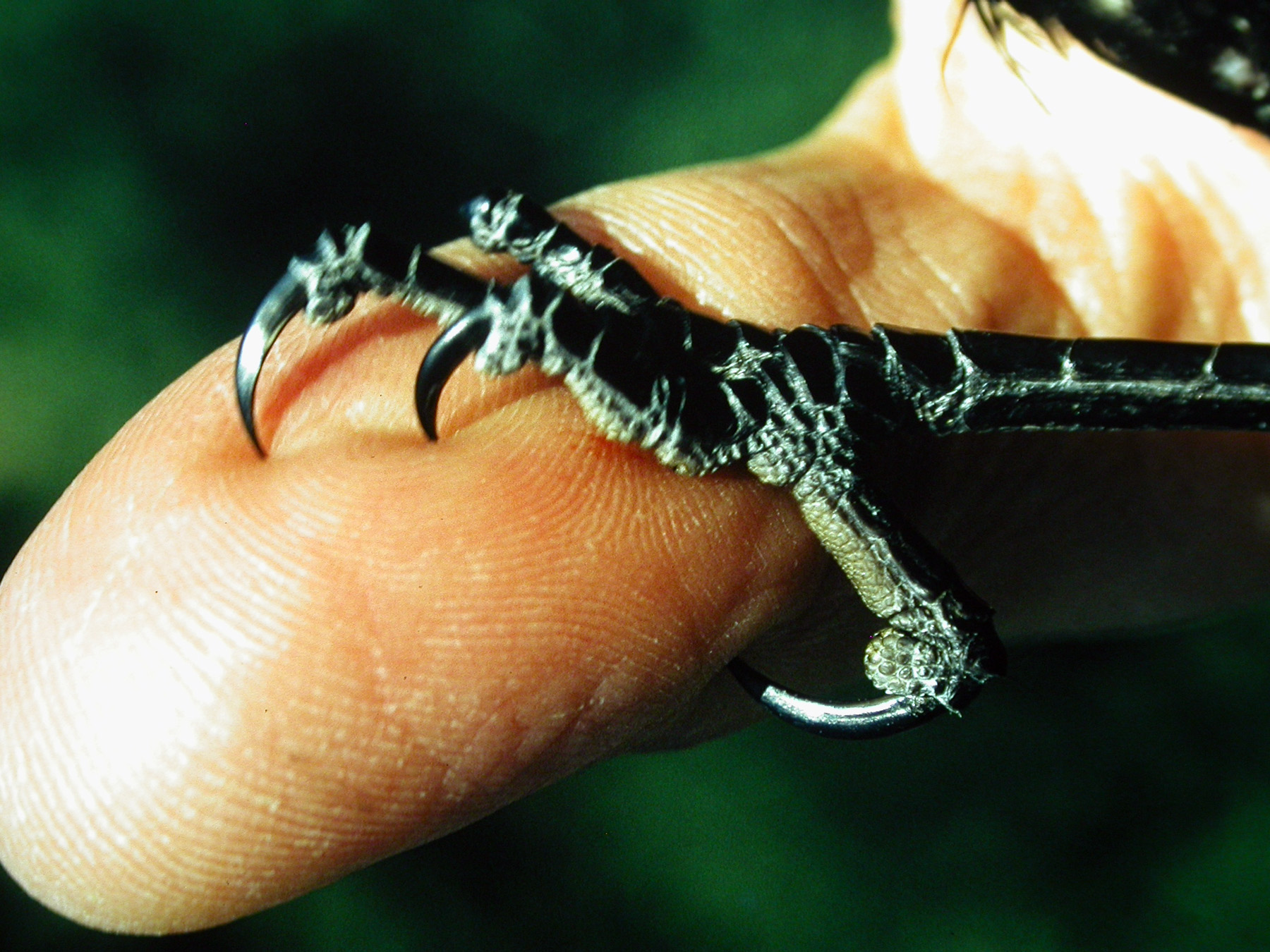 The strong foot of a red-wing nearly punctures the skin of Roy’s hand as he was banding the bird. Photo by Charlotte Lukes.

When the bird cocks its tail upward and produces the “LEE” part of his song his posture had reached its extreme, nearly that of a contortionist. Now he means business! Every ounce of his body seems to be thrown into this shrill colorful challenge to all other male red-wings within sight or hearing distance.

It is during the spring and fall that the red-wings make up a large part of their diet with the seeds of weeds and cereal crops, often becoming severe pests to farmers, especially when these aggressive birds congregate in enormous flocks numbering into the thousands. However, come June and July, their diet quite suddenly is made up largely of animal food including many injurious insects, as much as 70-100 percent of what they eat. Young in the nest are fed only animal food as are many other nestling songbirds.

Occasionally a bird sheds new light on actually how many years one can live. Roy was banding birds many years ago with a class of fifth graders at The Ridges Sanctuary. One of the birds captured in the mist nets was a male red-winged blackbird. Much to Roy’s pleasure he was already banded. Roy recognized the first three digits on the small aluminum band as his set that he was using in previous years.

As soon as he recorded the number and released the bird he went into the house to check his past records. You can imagine Roy’s surprise that it was already an adult when he banded the bird 10 years earlier. In other words that red-wing could have been more than 11 years old; tough, resourceful birds!

They are also very strong, based upon handling quite a few while banding them and having them grip Roy’s fingers in such a way as to drive their very sharp claws nearly through his skin. Watch one of these birds grasp the stem of a cattail, for example, and you can easily imagine how important to them their strong feet are.

These champion songsters of early spring will continue to be the flashy masters of the marshes and roadside ditches for years to come.

Charlotte Lukes is giving two bluebird programs this weekend. The first one is in connection with The Ridges Bluebird Nest Box Workshop on Saturday morning where people have to register through the Ridges. The second one is free and will be at Newport State Park on Sunday afternoon at 1:30 in the Nature Center. A state park 2018 sticker on your vehicle is necessary.