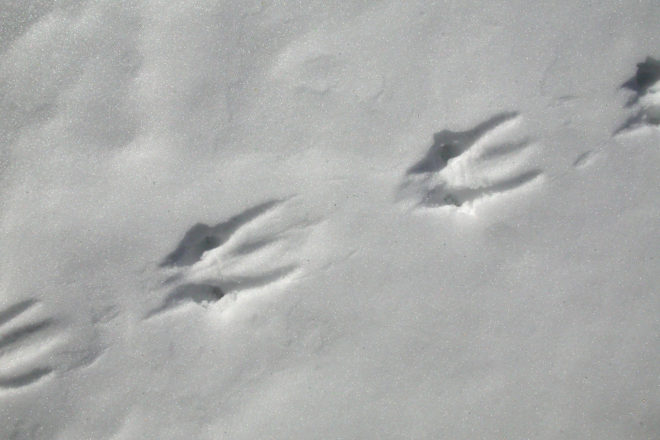 The tracks of the ermine, a weasel in winter, show that its hind feet step directly into the marks made by its front feet. Photos by Roy Lukes.

I saw the tracks of one of these small carnivores in the soft, newly fallen snow along the edge of the driveway this morning as I walked out to the mailbox. The eloquent tracks, spaced about a foot to 15 inches apart, left a trail appearing like a set of twin tracks, often as though the hind feet stepped precisely into the tracks made by the front feet. You guessed it – a weasel!

A fairly common sight in winter is that of a weasel dressed in its winter white, running across a black-topped road illuminated by your car’s headlights. Usually one does not often encounter weasels in the wild due to their stealthy disposition as well as the concealed location of their prey.

The old woodshed, located in the backyard of the range light residence at The Ridges Sanctuary where we used to live, was an absolute haven for mice as well as the Bang’s short-tailed weasel, also mentioned in many references as the ermine. It was there that I had exciting encounters with the willowy weasels during all seasons. By kissing the back of my hand, thereby somewhat imitating the high squeals of a mouse, I could approach the bold, highly inquisitive little mammal to within five or six feet.

By photographing one of the weasels posed next to a 2½-inch-wide board I was able to greatly improve my concept of their size. How easily I can now imagine one squeezing through an opening that is just 7/8ths-inch in diameter in pursuit of its prey. They are renowned for being able to follow field mice down into their small burrows. Obviously mice don’t stand a chance of surviving an attack by one of these lithesome predators. 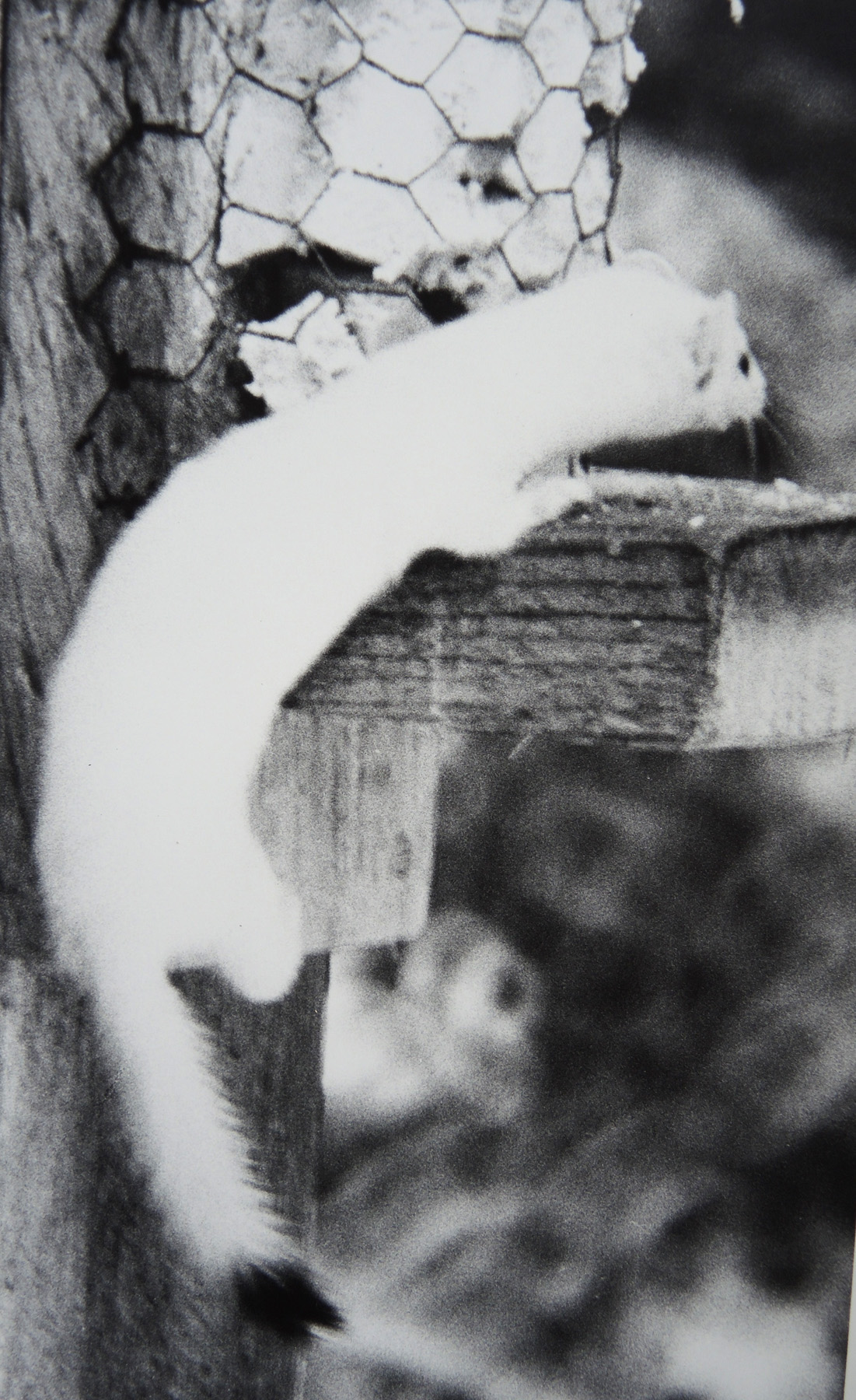 A weasel in winter has a pure white coat with a black-tipped tail and is known as an ermine.

Its compressed, flattened head, very short limbs and piercing black eyes give it a look of savagery. (I wonder how the towering humans appear to the weasels?) A relatively long flexible neck coupled with the animal’s nosy, prying nature imparts a decidedly serpentine quality to its surefooted exploratory movements. Often they appear to have endless energy, always on the go.

Unfortunately their stupendous feats of outwardly wanton killing (not common), such as a dozen or more chickens or tame rabbits in one night, label this indomitably courageous animal as devilish, bloodthirsty, cannibalistic and even murderous. I am quick to ask the accusers, “How can you possibly say the weasel kills for the sheer enjoyment of killing? How do you know? Have you put the weasel on the witness stand and squeezed a confession out of him?”

John Burroughs, famous nature writer of yesteryear, described the bold ferocious weasel, subtle and destructive enemy of birds, as one who inspires terror in small creatures. Even Burroughs’ protégé, Dallas Lore Sharp, in his 1908 book, The Lay of the Land, tells of cornering an ermine in a woodpile and throwing snowballs at it – “The death’s door at this feast.”

He spoke of its ugly head and hating eyes. Finally, not having any success with his snowball attack, he conceded that fortunately weasels are few in number and that there was more peace and goodwill in the woods than any other spirit. More friendly and timid eyes (birds and squirrels) watched him than bold and murderous ones (weasel).

One simply must take proper care of chickens and rabbits at night and give in to the fact that, like a well-run country, nature must also have a perfect system of checks and balances in order to maintain healthy races of animals including mammals, amphibians, birds and insects. Man, on the other hand, is obviously doing virtually everything possible to destroy the few really good balances in nature that still exist.

I have read of records of a male short-tailed weasel (always larger than the female weasel), weighing between 6 and 12 ounces, attacking and killing an adult cottontail hare weighing about 6 to 8 times that of the tiny weasel. Many studies indicate that as much as three-fourths of an adult weasel’s diet consists of white-footed mice and other small rodents and that this weasel, in order to remain alive, must consume on the average about one-third of its body weight in food every 24 hours.

Now consider the report that “royalty” garments of the coronation of King George VI of Great Britain in 1937 are said to have required 50,000 ermine pelts. Talk about being bloodthirsty and murderous!

I hope I haven’t painted too bleak a picture of this amazing little creature. Perhaps you will be lucky during your winter hikes to come upon a set of its easily identified, exquisite tracks. Suffice it to say that weasels are desirable under nearly all circumstances. Oh, if only the same could be said for homo sapiens!