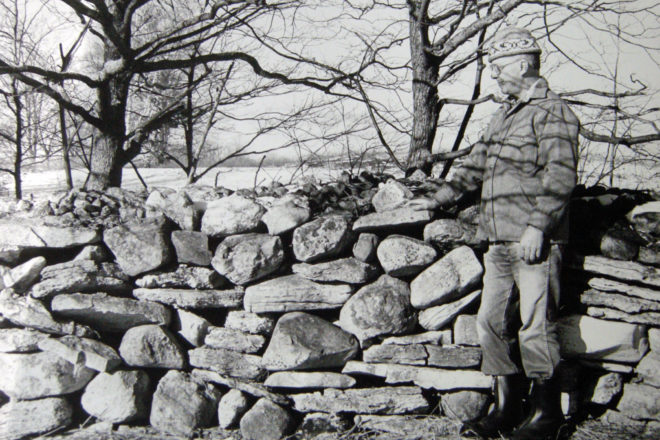 Several years ago I photographed a paper birch tree adorned by a stone fence in northern Door County. Even the interestingly marked Holstein cows contained by the several-hundred-foot monstrous structure added beauty to the total picture.

You might imagine my surprise the following summer when I returned with some friends, eager to see the picturesque wall, to discover that it had disappeared. Later I learned from the farmer who owned it that he sold the entire fence, every last stone, to a building contractor.

Eventually I came across what I still think is the county’s most massive native stone fence. (Its location will remain a secret!) This colossal monument is approximately four feet tall, 15 feet wide and 1,320 feet long. With dolomitic limestone weighing around 165 pounds per cubic foot, allowing for some air spaces, this well-built piece of stone art must weigh nearly 6,000 tons! 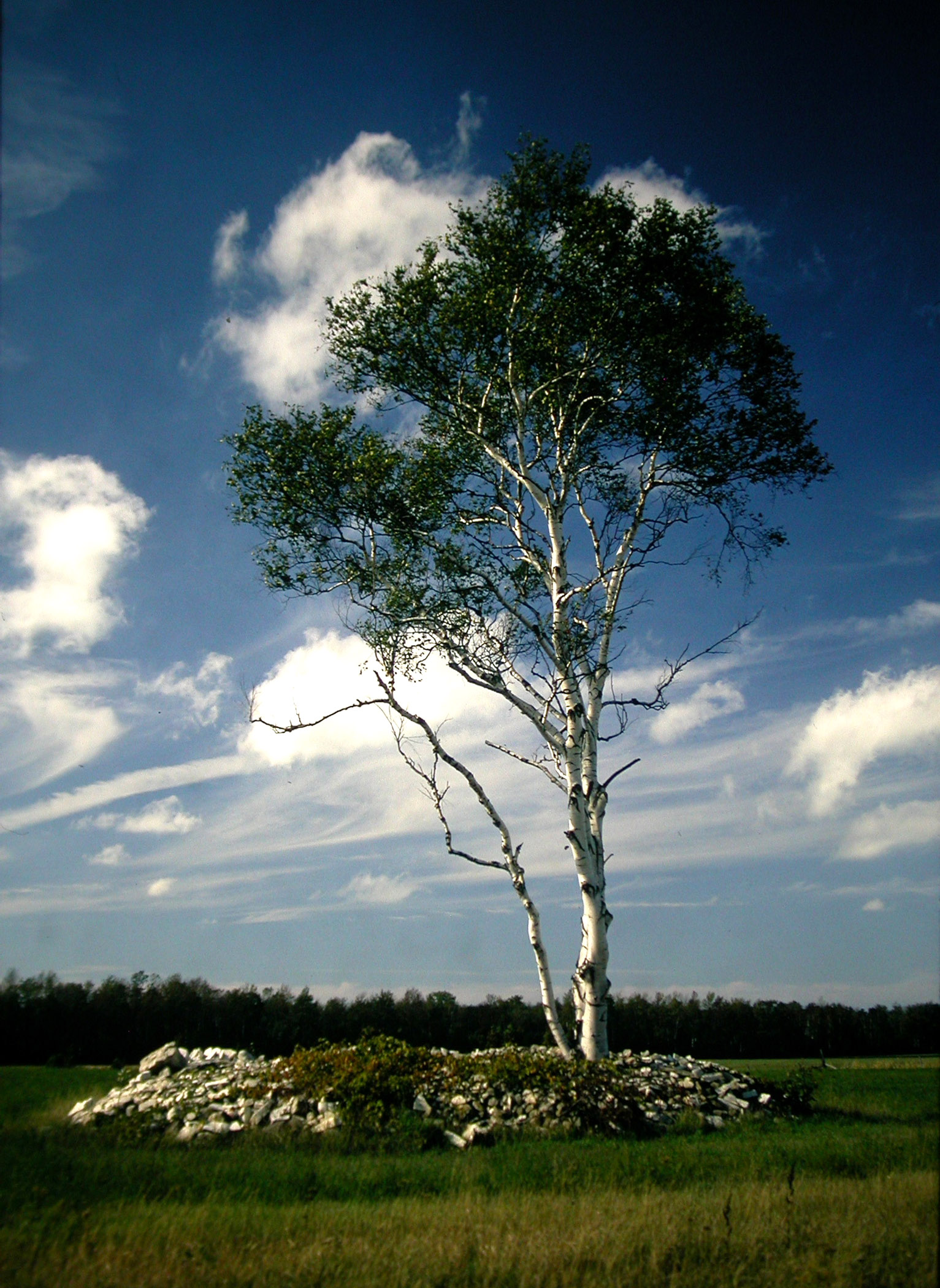 A paper birch stands within a pile of stones gathered from surrounding fields. Photo by Roy Lukes.

This champion, ongoing project is a line fence with two families, stretching over several generations, cooperating toward its annual growth. Just imagine the thousands of backbreaking hours, children, mothers and fathers, grandparents all contributing, required to keep those fields relatively free of stones, suitable for planting crops.

How well I remember an experience with one of my students years ago, who still runs the farm today. I told him to ask his father if it would be alright for me to look for fossils on one of their stone fences. Back came the reply the next morning, “Pa sez ya kin have all the fossils ya want, but come and pick ’em when we’re pickin stones in the fields this spring!”

I look back on that treasured moment of reply with more and more respect every time I see a stone fence. My motivation of primarily rural students of the area to the study of geology was more difficult than in an urban setting far from rock-studded fields. Here the sons and daughters of farmers tended to associate rocks and stones with the strenuous and thankless task of clearing the fields. Needless to say, geology did not “Turn them on!”

The occurrence of fossils amidst the ordinary lackluster rocks to be piled onto the monstrous fences did add a little interest to our study. However there were several repercussions from parents toward our geology course. One remarked during a parent-teacher conference, “My daughter is just no good anymore at picking stones. Ever since you began teaching her about fossils she insists on turning over and over every stone she picks from the field and wastes so much time. She wants to bring home nearly as many as she piles on the fence!”

Many of the older pieces of limestone, including those with fossils, making up the mile after mile of stone fences have been etched, cleaned and worn by the forces of weathering. A weak form of carbonic acid, produced by nature during rainfall, as well as that horrendous substance called acid rain, a devastating byproduct of some industries and various forms of combustion are constantly at work, slowly dissolving the rocks. Crystallized, ossified, fossilized, petrified, all will in due time be returned to the earth, their point of origin.

Years ago a famous soil scientist, Dr. Francis Hole, visited The Ridges Sanctuary and presented a lecture and program. He talked about Wisconsin’s soils and the importance of conservation. He also remarked that we are all “TNS,” temporarily not soil!

A favorite poem of mine, “Mending Wall” by Robert Frost, says that good fences make good neighbors. One of my friends, Hazel Cox, visited me for a few days with her husband David on Sept. 29, 1966, and saw something entirely different in the thousands of feet of expertly made stone fences. My fondest memory of their visit is also in the form of a poem which Hazel wrote and left with me.

The saying was that every field

In this new land two crops would yield.

Potatoes would in summer grow

And frost-heaved rocks in winter’s snow.

So every spring with stubborn toil

Before the plow could turn the soil,

The pioneer with calloused hands

And aching back cleared off his lands,

Assisted by his willing brood,

For well they knew the need for food.

Man, beast and fowl must all be fed,

And so a crude and home-made sled,

A clumsy “stone-boat” was brought out

By patient oxen dragged about

Until once more the field was cleared

And higher yet the fences reared.

The work-worn hands have long been stilled.

As monuments through this fair land,

To all the sturdy pioneers….

To by-gone ways of by-gone years.