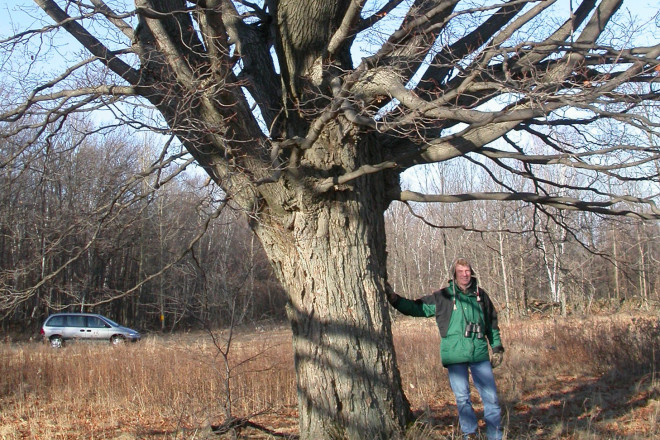 Our friend, Peter Wolter, stands next to a “three-bucket-maple” in southern Door County. Photo by Roy Lukes.

Each day, as we get closer to spring, the white ribbons of hard grainy snow along the driveway through our woods become smaller and smaller. Soon skunk cabbages will be poking their new pointed forms up through the snow in the wet swamps of the southeastern part of the county. They are the genuine harbingers of spring that reveal their mysterious beauty only to those ambitious few who are willing to go exploring away from the beaten track.

Robins and red-winged blackbirds will be returning to the county by mid-March, as will song sparrows, eastern meadowlarks, killdeer, common grackles and brown-headed cowbirds. You may even see a few eastern bluebirds and sandhill cranes in the countryside. Turkey vultures will soon be soaring over the land searching to snack on a road-killed animal that ventured out for a taste of spring.

These are a few of the anticipated migrants we look forward to seeing and hearing as warmer winds blow from the south. Another event happening in many woodlots all over Door County and much of northern Wisconsin is the tapping of the sugar maple trees. The American Indians of the Great Lakes and St. Lawrence River regions who reputedly perfected this technique before the arrival of the white man called the spring sap “sweet water.”

One has to respect the inventiveness of some Indians years ago for the spring ritual that has led to one of nature’s finest natural resources, maple syrup. Chances are they observed animals such as red squirrels or birds like cedar waxwings drinking the sap from broken branches. Tasting it and finding it slightly sweet, experimenting and after years of trial and error, we can now enjoy this delicious form of sweetening on our pancakes and waffles as well as in other favorite foods.

We watch the red squirrels perform daring balancing acts as they reach for the tips of the broken twigs where the sap drips the best. When the sap runs and then freezes during the night we awake to see “sapsicles” decorate several branches. One of my readers wrote of seeing a small flock of cedar waxwings drinking the sap on their maple tree that had recently been pruned and, similar to tapping a maple tree, was slowly losing some of the spring run of sap.

It is said that the “sweet water” sap, from which comes maple syrup, is different than the circulatory sap of the growing tree during the summer. I know it is common knowledge among those who tap each spring that the first run usually produces the sweetest end product and that the quality deteriorates as spring wears on, eventually to the point that it is bitter to the degree of being distasteful.

Strangely the raw sap, containing from 1.5 to 3 percent solids, mostly sucrose, has neither the color nor the flavor of the finished product, maple syrup. A good year such as last spring will produce one gallon of syrup by evaporating around 30 gallons of sap. More likely the average ratio in most years is closer to 40 to one.

Backyard maple sugaring can be unusually simple and inexpensive. Metal spiles are available at a good hardware store and don’t cost very much. However, half-inch-thick and four-inch-long twigs of the common elderberry or staghorn sumac can also be used for the spiles by reaming out the soft pithy centers of the twigs with a stiff wire. Sharpened into a spout, notched to hold the collecting pail and gently tapped into an inch-deep hole drilled slightly upward into the south portion of the trunk will yield a surprisingly good flow of sap. You can use containers such as thoroughly cleaned ice cream pails or gallon plastic milk bottles.

Naturally the sap must be cooked to evaporate the excess water and here is where one’s ingenuity comes into play. Experience will eventually teach you a great deal about this gentle but noble art. Should you have gotten the brainstorm to boil the sap indoors on the kitchen stove surely you soon realized that it’s best to do it outdoors. Hopefully not too much of your wallpaper fell off after evaporating 40 or 50 gallons of water in your home!

A candy thermometer seems to work quite well to help you determine when the syrup is finished. Seven degrees above the boiling point of water at your location should be just right. This would come to about 219 degrees F. That interesting and limey substance called niter must be filtered from the syrup, preferably with regular syrup filtering felt.

The syrup can be put into canning jars (heat them first) or even recycled sterilized glass jars from grocery foods. Make sure the lids fit properly and then store the finished product in a cold root cellar or the refrigerator till ready to use.

Old friends from years ago, Walter and Bertha Reinhard, who made maple syrup for more than 50 years, said it was a lot of work but also a lot of fun. They especially enjoyed the company (presumably each with a sweet tooth!) who came to watch this great spring ritual. I remember a visit where Bertha scooped some partly cooked sap, put it in a teapot and added a tea bag or two. We all enjoyed a cup of maple sap tea.

From all the books I’ve read on this interesting subject, including Backyard Sugarin’ by Rink Mann (The Countryman Press, Woodstock, VT) and the people I’ve talked to, one can expect to average about one quart of syrup per tree tap during the sugaring season. That means a good tree will produce around 10 gallons of sap or more. Twenty taps should bring you about five gallons of syrup.

Get out and talk with those who are experienced tappers and are still active each spring. See how they go about this ancient art practiced only on the North American continent. The prediction is that a gallon of syrup will result from a barrel of fun and excitement. Join that select group, close to nature, that greets spring with the purely ambrosial magic of changing maple “sweet water” into delectable golden syrup.