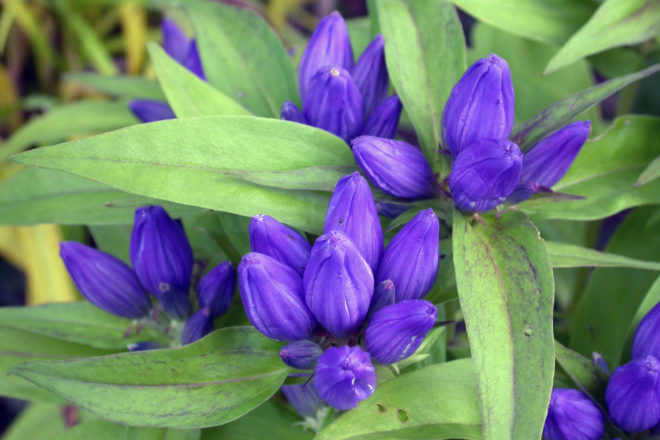 The bottle gentian never opens but bumblebees can push their way inside. Photos by Roy Lukes.

Henry David Thoreau once described a cerulean marvel of a native wildflower as “Blue as the bluebird’s back.” Thoreau added that this wildflower, now in the early stages of its six- to seven-week blossoming season, “is too remarkable a flower not to be sought out and admired each year.”

The incredibly beautiful fringed gentian, that so enamored Thoreau, surely is one of the star performers in Door County’s fall wildflower extravaganza.

Even though my parents knew many of the wildflowers in the Kewaunee area, I do not recall them ever mentioning the fringed gentian. Apparently that flower’s September and October blossoming period came at a busy gardening and canning time, and when school was in session for me. 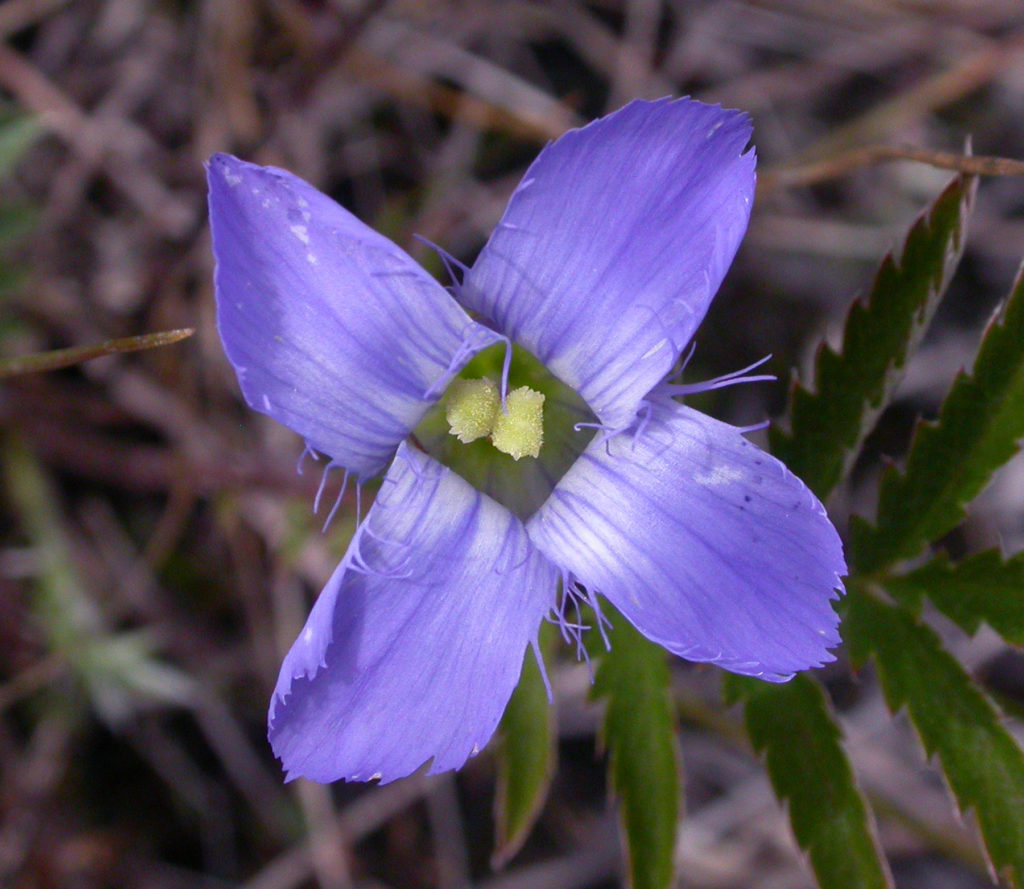 On a sunny day you can look straight down into the square blossom.

In later years I did learn from my butterfly expert friend and excellent naturalist, Sylvester Ziemer, that they did grow and blossom every year within a block and a half of our school. Unfortunately our teachers had us sitting rigidly in desks with our noses too close to the books, learning to study, behave and follow orders so that, upon graduation, most of us could find and hold down a job in one of the factories in Kewaunee.

Had I been guided to explore the steep clay bank along the south side of Mintz’s Hill heading east toward Lake Michigan as Sylvester did, I too would have found the gentians open only on sunny fall days. Gorgeous blue blossoms pointed straight up toward their zenith and decorated that unusual site, a natural glacial seep that was quite moist during most of the growing season.

There are about 60 gentian species in North America, with approximately 23 different kinds to be found in the eastern half of the country. I know of only two species in Door County, the biennial, so-called lesser or smaller fringed gentian, Gentianopsis (jen-she-an-OP-sis) procera (pro-SEE-ra), meaning tall, and the perennial bottle gentian, Gentiana (jen-she-AN-a) andrewsii (an-DREW-see-eye).

As gentians go, both species seldom are observed in abundance anywhere, although my guess is that the bottle gentian, being a perennial, is more widespread in our county. To me, gentians are first-class “thoroughbreds.”

I prefer to call our fringed species the tall fringed gentian because I have observed some plants in the past that were 18 to 20 inches tall and contained upwards of three to four dozen blossoms.

One of my favorite botany and bird specialists and a writer of excellent field guides of the early 1900s was F. Schuyler Mathews who described the color of the lesser fringed gentian:

“… the nearest to true blue of almost any wildflower.” It got its “lesser” name simply because the fringes along the edges of its four petals are shorter than those on the fringed gentian, Gentianopsis crinita (cri-NY-ta).

Gentians in general, being blue, are good bumblebee flowers. The various obstacles, including the fairly deep tubular shape of the fringed gentian and the closed nature of the bottle gentian, don’t deter the strong bumblebees who quite easily muscle their way into both flowers for nectar and pollen. 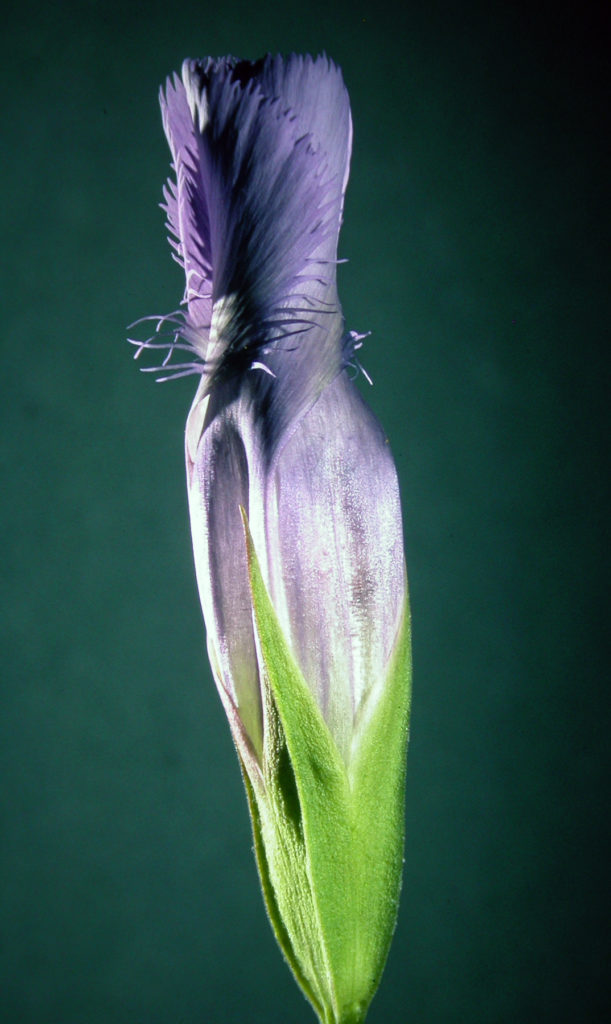 An unopened fringed gentian shows off the fine fringes on the petal edges.

Look a single fully-opened fringed gentian blossom square in the eye some sunny September day and you may or may not see the single, upright yellow pollen-bearing anthers (male parts) before the female parts develop near the base of the tube. This timing sequence is known as protandry, the male sex preceding the female. This prevents self-fertilization and may increase chances of natural selection, important changes along with climate change for example, and continued flowering and existence from year to year.

In more recent times, gentians have suffered from the drainage and loss of many wetland habitats. Tall fringed gentians rely upon wind-scattered seeds for reproduction. Often these tiny seeds are blown across the sandy or rocky ice-glazed shores in winter. Because the seeds are viable for such a very short time, it’s an easy matter to destroy entire gentian populations through development of the popular in-demand shore areas.

It was during late July of 2005 that Charlotte and I had the chance to do some exploring in the 12,000-foot elevation alpine meadows of the Rocky Mountains. There happen to be around 35 species of wild gentians in this crisp high-altitude region where the growing season is very short. Naturally we expected to find some of them but apparently were either too early in the season or we didn’t visit the proper habitats. Two species there, the explorer’s gentian and the Rocky Mountain fringed gentian, are known to be quite abundant. The latter species is the official wildflower of the Yellowstone National Park.

William Cullen Bryant spoke highly of the fringed gentian, reflecting a particular fondness for this plant from years of enjoyable observations and closeness to nature. Read his wonderful poem, “To the Fringed Gentian,” then head for the great outdoors, such as the Ridges Sanctuary, in search of these bluest of blue wildflowers that open only on sunny days.