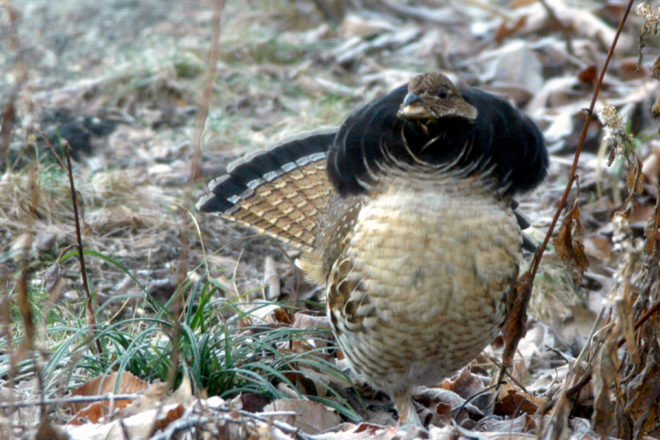 A male ruffed grouse fans his tail and the ruff around his neck in order to impress and attract a nearby female. Photos by Roy Lukes.

The very first ruffed grouse I ever saw brings back pleasant memories. One of my all-time favorite teachers and friends was Walter Kacer, who taught our seventh and eighth grade boys Sunday school class at Kewaunee Congregational Church.

He and the other teachers at church were far ahead of their time in realizing that by the time boys and girls reached junior high age, they learned much more and better when they were segregated. And we preferred that arrangement, too.

Walter also knew boys at that age possessed great energy and, whether they realized it or not, loved the outdoors. About every other Sunday, he loaded us up in one of the Syke’s Feed Mill trucks (he managed the mill) and took us on exciting adventures into the surrounding countryside. 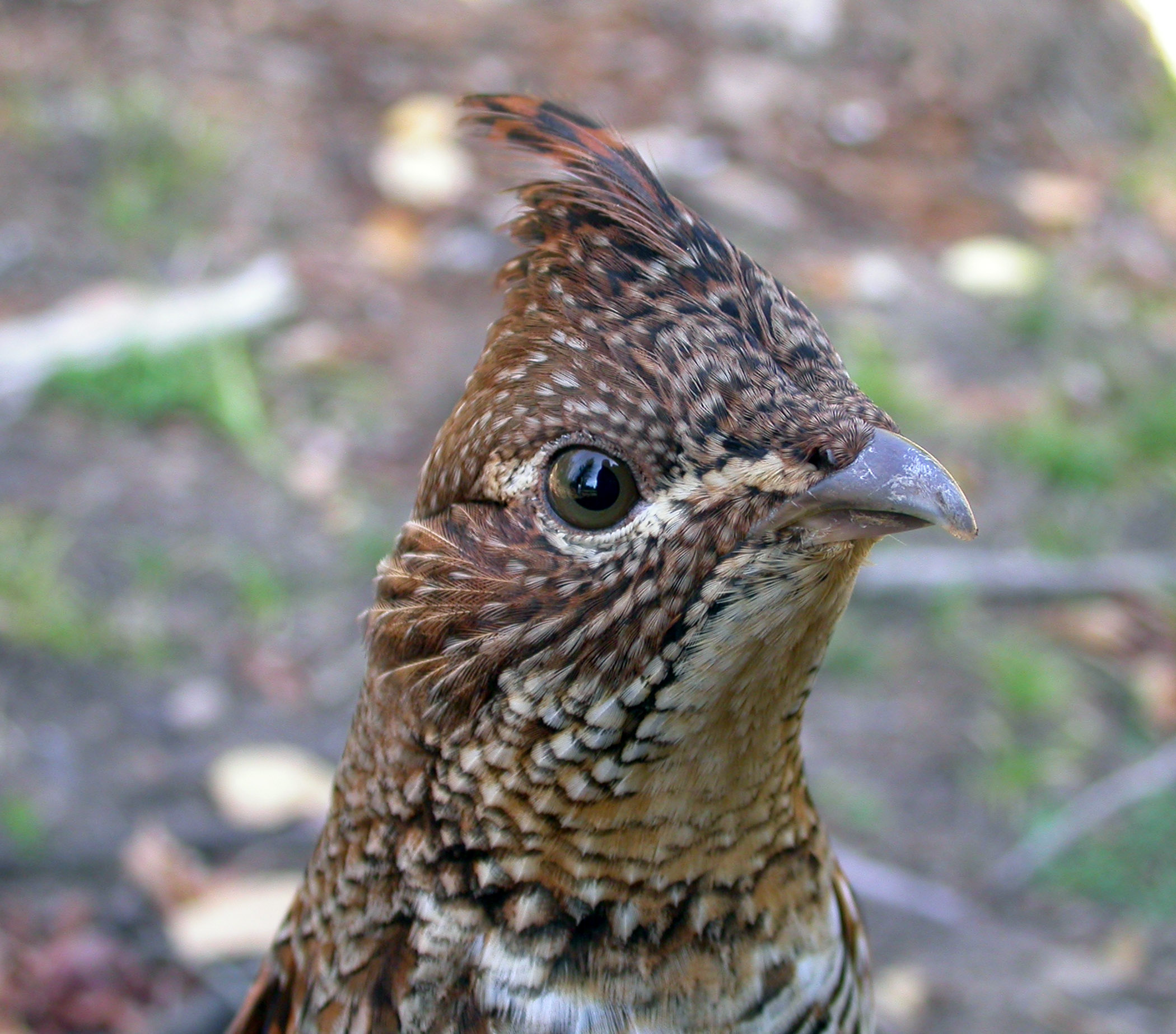 This grouse was so interested in Roy’s camera that he had to get a closer look.

It was during our trek into the Seidel’s Woods bog southwest of Kewaunee that we found the perfect place to play one of our most cherished games of Capture the Flag. On one of my stealthy sneaks around the perimeter of the opposing team’s guards, I suddenly came upon a ruffed grouse quietly strutting – tail fanned, ruffs extended – beneath a hemlock tree behind which I was trying to hide.

I must have approached the wild and trusting bird to within eight or 10 feet before it decided to quietly fly away. I don’t remember in the slightest what the outcome of that highly contested game of Capture the Flag was, but much more to my advantage, the ruffed grouse experience made that bird become one of my most favorite of all wild animals.

Fortunately these hardy game birds were fairly common residents of the Ridges Sanctuary. It was always an unexpected thrill, during my 27 summers of leading tours there, to be momentarily caught off guard with my tour group and somewhat startled at the noisy take-off of a grouse. Occasionally we were lucky enough to actually see the extra-careful creature.

About 20 years ago we enjoyed close encounters with “Reggie,” the unbelievably tame Northport cock grouse at our friends’ home and yard. It was attracted to sounds made by car engines and would come out of the woods to walk along their driveway. One day it even entered the open cab door of a propane delivery truck, whose engine was running while the man pumped the gas into the resident’s tank.

Another experience occurred at Cave Point County Park while hiking on a woodland trail. Our walk was interrupted by a resident grouse who apparently “owned” that section of the path and would not allow us to venture any further. Charlotte stopped to watch it and the bird would come up to her and, with its beak, tug on the bottom edge of her blue jeans, as if to say, “You’ve gone far enough!”

We nicknamed him “Ruffian” as he taught us how hard he could run into our legs as he tried to chase us away from the land over which he lorded. The photo of that grouse is on the back cover of our last book, Tales of the Wild.

The point about his confrontations we remember with such fascination is when we came to a specific location along the trail as he was chasing us, he would stop suddenly as though there was an invisible barrier beyond which he was not allowed. That was the boundary line of his home territory. If we returned he was waiting for us at this precise spot and quite fearlessly resumed his attempt to drive us away.

A cock grouse in our own woods, who we nicknamed Ruffy, has gradually been warming up to our presence, perhaps associating us with the daily handout of cracked corn along the driveway near our home. Recently I was using a steel-tined leaf rake to clean the fallen leaves away from the edges of our long driveway. Ordinarily the winds accomplish this for us but this year that didn’t happen.

It was about midway up the gentle slope of the drive south of the house that I suddenly looked up to see Ruffy quite nonchalantly walking ahead of me as I raked, keeping his distance at about 30 feet. My guess is that he was attracted to the noise of the rake.

Needing a brief rest, I decided to kneel down and carry on a “grouse conversation” with our friend. Much to my astonishment, Ruffy slowly approached me until finally he was nearly close enough for me to reach out and touch him.

When I resumed my raking, he remained behind me and much closer than before. Apparently he was quite interested in insects that I was uncovering and especially small green plants, such as wild strawberry leaves, which he snapped up and ate.

A few days later Charlotte called to me in the downstairs work room, where I was doing some photograph framing, to tell me that Ruffy was in the front yard displaying beautifully. Fortunately my camera with its long lens and monopod were ready for action, and within minutes I had taken many pictures of our trusting friend in all sorts of poses. What a great little performer!

Both Ruffy and his extremely tolerant and trusting hen partner share freely with other birds coming to our feeders, constantly remaining cautious, shy and reserved – which is easy on their wooded home.

One last interesting ruffed grouse event happened at a friend’s home and sawmill north of Green Bay in Marinette County. We visited there one fall and walked into their back wooded area to find a very curious grouse in a clearing. The owner of the property had been leaving cracked corn there for him and Roy tried to photograph the bird with his long lens. Well, the grouse was just as interested in Roy, so came very close to him. He appeared to walk right up to the lens on Roy’s camera as if to look into that dark circle.

Needless to say, Roy had to keep backing up in order to get the bird in focus. We enjoyed the sunny day with our friends and the trusting grouse and came home with many fine photographs.

Let’s change our ways and prove to all creation that we can be like the ruffed grouse – gentle, conservative, demanding a minimum from the land and easy to get along with.