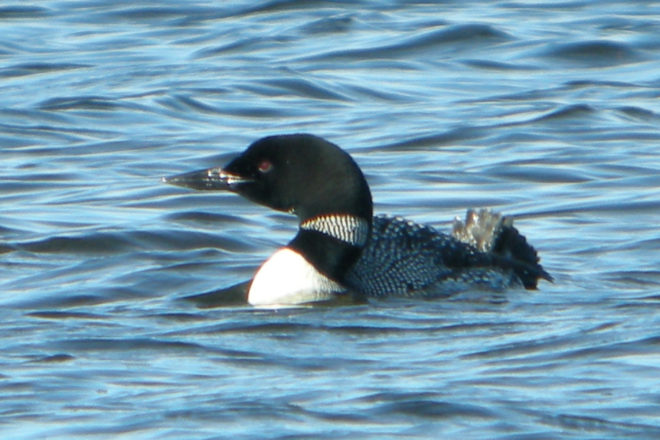 This common loon has its tail fanned as it stretches its left leg out of the water. Photo by Roy Lukes.

A favorite bird of many people living in the North Country rides the toes of oncoming winter south as the lakes freeze up. Come late March these same magnificent divers follow closely on the heels of spring as it advances through our state, leaving melted openings on the ice-covered bodies of water. Loons, like most people, can hardly wait for the warmer weather.

The British call these restless birds great northern divers. In fact, they surely would rank high on the list of the world’s most perfectly adapted deep sea diving birds. Their long torpedo-shaped bodies allow them to move more swiftly beneath the water than on its surface. Strong webbed feet mounted far to the rear of their body act like sturdy propellers.

Parts of their legs are actually within their bodies, encased to the ankle bones, and are controlled by powerful muscles. They can remain underwater for more than two minutes and swim to a depth of 150 feet or more. Fishermen have caught them in their nets at that great depth. 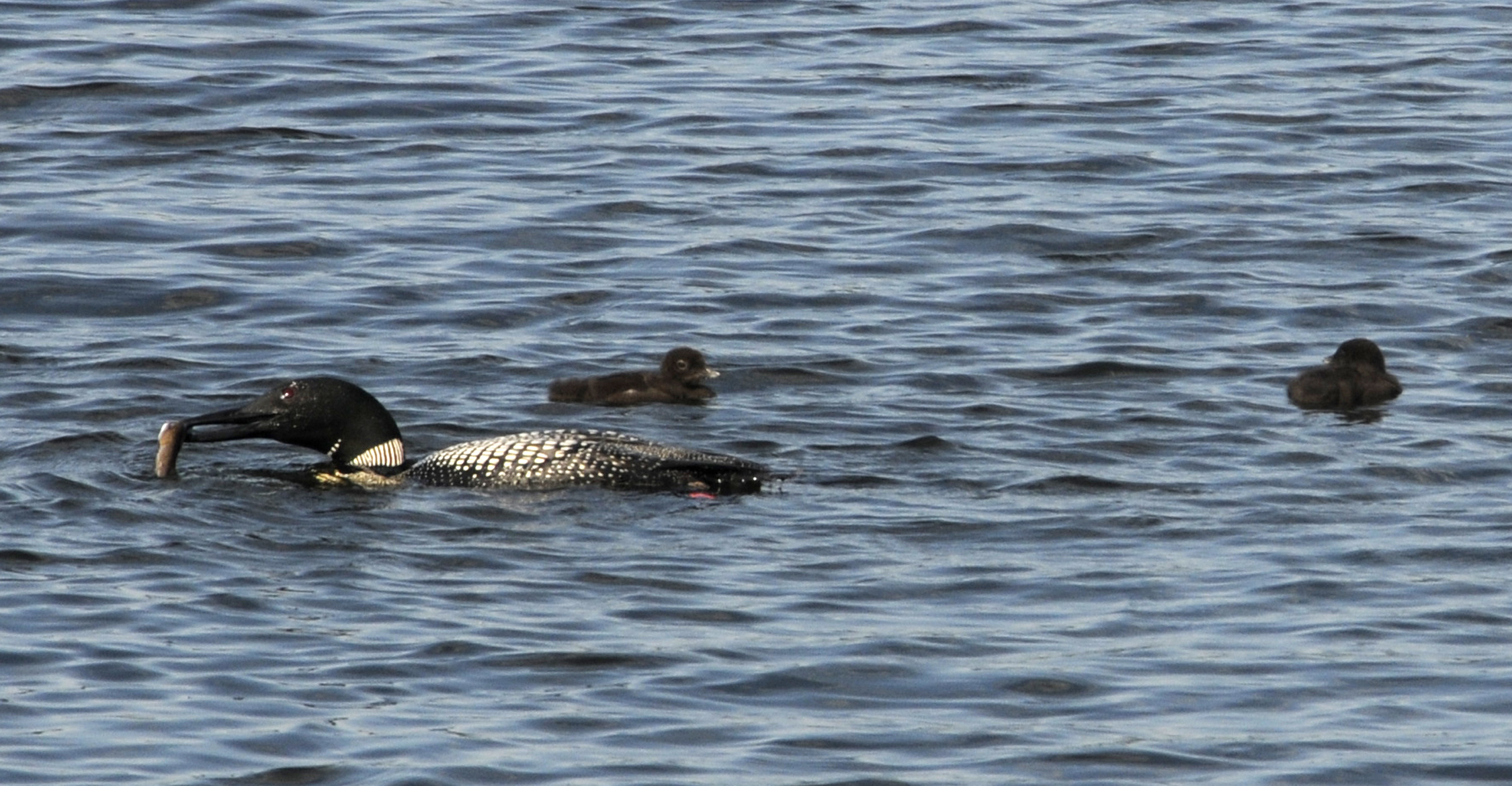 Two loon chicks swim with the adult who has just caught a fish. Photo by Roy Lukes.

Loons have an extremely high tolerance for carbon dioxide. Their oxygen requirements for long dives are fulfilled not so much from the free air in their lungs as from oxyhemoglobin and oxymyoglobin which are stored in their muscles. The dark flesh of most diving waterfowl reflects the presence of both of these vital substances.

Like grebes, their bones are solid, providing them with more ballast for their extended underwater hunting trips. They have the ability to pull their feathers tightly in toward their bodies thereby expelling much of the air, then slowly, quietly and ripple-free they sink into the water. A loon has superior waterproofing. Its plumage, very un-birdlike, is extremely thick, oily and compact, perfectly suited for the diving and underwater swimming this bird of the north does.

Loons must run for considerable distances on water, preferably into the wind, in order to become airborne. I remember a day in late March many years ago when Roy and I drove across the Kangaroo Lake causeway. A small section of ice had melted along the south edge of the road. We noticed a common loon was in the water quite close to us. It tried to move away but was unable to fly due to the lack of a long stretch of open water in which to run for its take-off. It was trapped until more of the ice melted to open a greater part of the lake.

I only wish I were able to describe its song, exciting your imagination as much as I was thrilled the first time I heard it. What a symbol of northern lake-country music! At times their long, mournful, wailing call can fool you into thinking a wolf is doing the vocalizing. Their plaintive, tremulous pleading, frequently done while they are reared up on their tails, will never be forgotten once you hear it. The echoes and re-echoes produced by loons on small tree-surrounded lakes is one of nature’s most beautiful sounds. Their wild laugh-like call easily led to the descriptive phrase “crazy as a loon.”

It is most fitting that Minnesota, with all its Scandinavians, chose the common loon to be its state bird. It is very possible that an old Scandinavian word, lómr, meaning a lummox or awkward person, was applied to this bird many years ago. As so often happens the word somehow was changed to loon. True, what grace and beauty this creature possesses under water is completely lost on land. Its short legs are set so far back on its body that the loon is a helpless victim should it accidentally alight on land too far from water.

But once in the water, that’s a different story. Few other birds in the world can match the underwater prowess of this skillful swimmer. They have more body weight per square inch of wing than nearly all other flying birds. This remarkable 8- to 10-pound, 36-inch-long bird is very long lived. Records of banded loons have proven they can live in the wild to be 23 years old.

That was before the Great Lakes were invaded by the zebra mussels and quagga mussels. Studies done during the past 10 to 15 years have revealed that these small creatures are filtering the Lake Michigan waters so much that sunlight is reaching deeper than ever before. This helps the algae to grow into thicker mats. The bottoms of these mats begin to decay and slough off. 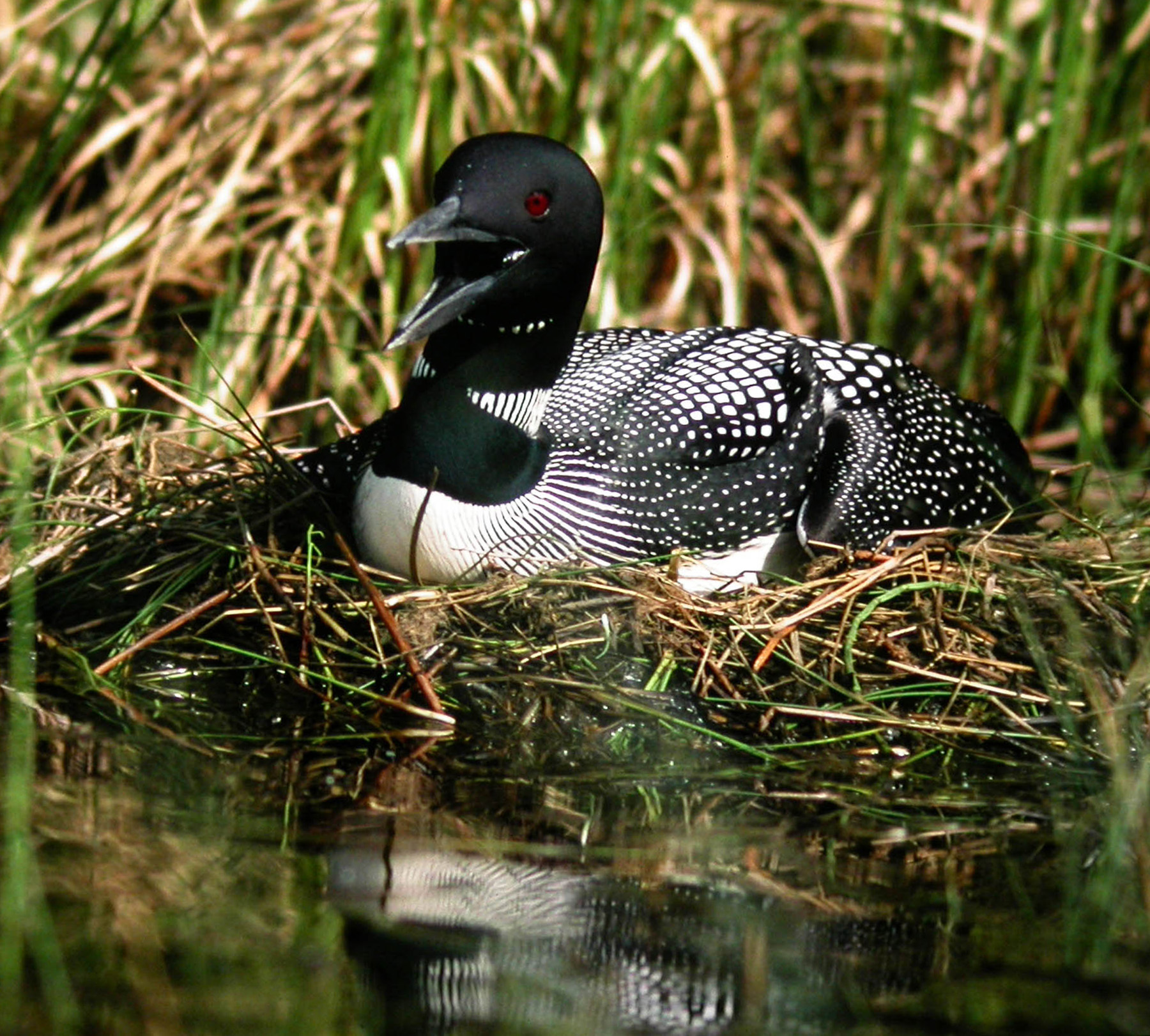 A common loon calls out as it incubates eggs on its low nest at water’s edge. Submitted.

I remember the awful smell of the cladophora algae washed up on our beaches during times of lower lake levels. The warming of the lake also encouraged this development.

The thicker mats of algae produce a low-oxygen environment for the botulism toxins to develop. Small insects and worms feed on the bottom layers of the algae in the lake ingesting the toxin. The round goby, another invasive fish, eats these creatures and the loons eat the goby thereby consuming the toxin. The poison affects the nervous system of the waterbirds, often paralyzing them to the point where they can’t even keep their head above water. This causes many of them to drown and wash up on beaches in Lake Michigan.

The shores around Door County, the far northern end of the lake and beaches along the Sleeping Bear Dunes in northwestern Lower Michigan have seen the greatest die-offs. An estimated 3,000 loons died from botulism poisoning in Lake Michigan just in 2012. It affects many other waterfowl as well as the bald eagle.

Loons, in general, have a low reproductive rate. Birds hatched up in our north country will fly down to the Gulf of Mexico and spend the entire next year of their lives there before flying north to mate the following spring. Unfortunately they have a low rate of survival there, too. Many fall victim to waste oil given off by ships. Frequently only one of the young will survive and be reared by the parents, but how they guard that tiny ball of dark feathers!

Loons, for many years, were considered detrimental to the fishing industry. Consequently many were shot. Study has proven that their diet also includes water plants, insects, crayfish and various mollusks.

The first Wisconsin Breeding Bird Atlas, written in the late 1990s, indicated that the common loon was nesting in the northern third of the state and in a few of the west-central counties. Many choose to nest on the smaller lakes in the far north. An increase of vacation cottages and boating on many lakes can reduce the peaceful habitat required for these wild creatures.

The loons, prime symbols of wilderness and the good life, are hurting badly. People, especially during their leisure hours, increase their intrusions upon the isolation and security of the helpless loons. This could very well stand as an example of many of our actions. Let’s not allow recreation to wreck creation!