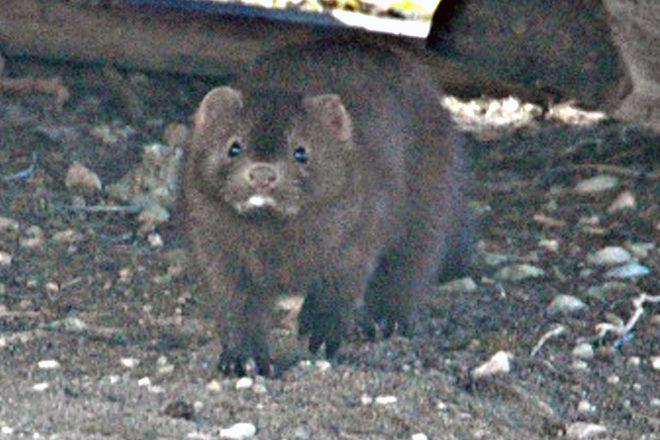 A fisher was seen in early April of 2009 under the trailer next to our garage. Photos by Roy Lukes.

Which two wild animals would you guess bring about the most complaints in northern Wisconsin? Deer undoubtedly represent the number one problem in central and southern Wisconsin.

The number one and two animals of concern in the northernmost counties are the bear – number one, and the fisher – number two. Black bears as potential problem makers to mankind would not raise many eyebrows, but fisher? Consider yourself among the 99 percent of people who have never seen a wild fisher. As for that matter they might have never even seen a picture of one!

Before the advent of logging in the North and the slow settling by people, fishers were common. Clearing of the land, extensive logging and trapping for fur led to such a drastic reduction in the fisher population that by 1921 these wary creatures received legal statewide protection.

Keep in mind that there are no “labels” placed on traps and consequently these inquisitive, easily snared fishers were virtually trapped out of existence in the state. Records indicate that wild fishers were nowhere to be seen in Wisconsin after 1932. They had become extirpated – gone from the land of milk and honey.

Experts from the Wisconsin DNR and U.S. Forest Service promoted, planned and executed a fisher reintroduction program in 1956. Seven animals were brought here from the Adirondack region of New York state and released along with 53 from Minnesota. They were introduced into the Nicolet National Forest in Forest County. 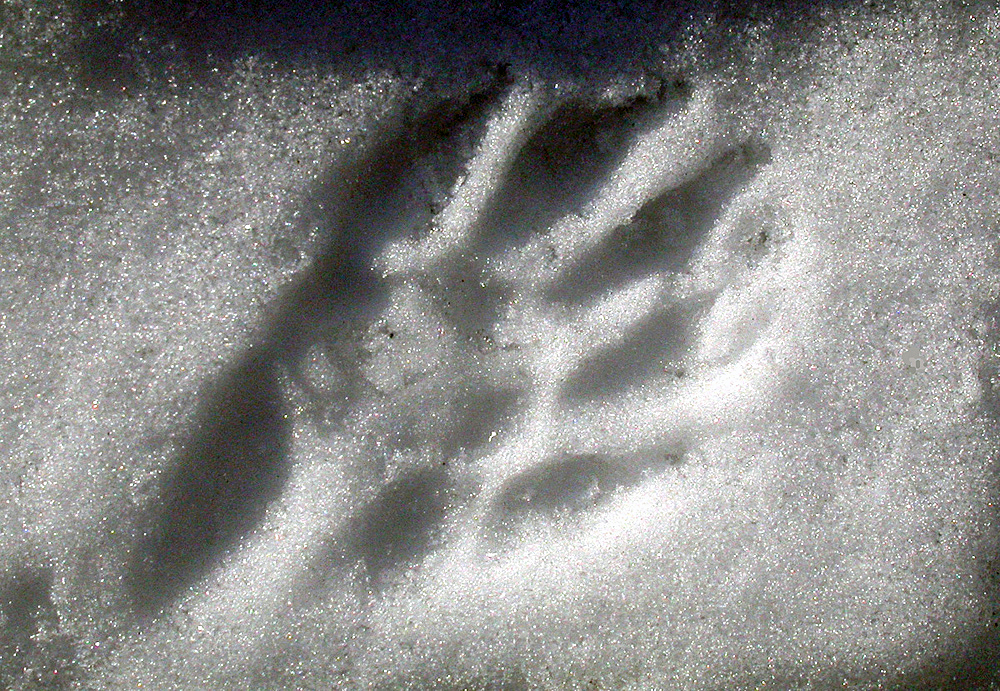 Here is a track of a fisher in the snow showing its long toes.

Another 60 trapped animals from Minnesota were released into the Chequamegon National Forest in Wisconsin, in Ashland and Bayfield Counties, in 1966 and 1967. A total of 340,000 acres in these two national forests were closed to fisher trapping and remained closed for a long time. Only wet-set traps (for otter, beaver, mink and muskrat) were allowed, thereby eliminating the possibility of fishers being caught.

So successful has been the fisher reintroduction program that trapping for them has again been allowed in recent years. Between 1.400 and 1.500 were taken during a season in the early 1990s. The population statewide prior to that trapping season was estimated at around 6,000 animals. However, the fact that as many as one quarter of them (1500) were trapped leads some wildlife people to place a more realistic fisher population in the state as high as 12,000.

In reviewing DNR fisher population estimates from the year 2015 it appears that the northern one-third of Wisconsin had about 6,900 fishers. It was recommended that 985 animals were to be trapped. Annual population estimates made dating back to the early 1980s showed a peak of more than 13,000 fishers occurred in 2005 just in the four zones north of state Hwy. 29.

By law it was required that along with the tagged furs, the fisher carcasses also had to be surrendered to DNR officials. Thus they were able to determine age, sex and reproductive success of the animals. Placental scars from the females’ ovaries and uteri indicate the rate of reproduction. One hypothesis, related to the determined low reproductive success of the trapped animals in Wisconsin is that the population of fisher is too high and the animals are overly stressed.

You might be wondering what fishers eat. Even though their name implies that fish are a part of their food, fishers are not fish-eating creatures. Snowshoe hares, mice, squirrels, chipmunks, porcupines and wild fruits in fall and carrion in winter make up much of their diet. Earlier it was mentioned that fisher are the number two complaint animal in northern Wisconsin. The reason for this, in part, is that they are very fond of consuming house cats and small dogs that are let out alone at night.

A winter study in Minnesota revealed that a large percentage of their food consists of dead deer. The discovery of moose and red fox hair in the feces of fisher was also suspected to have come from carrion the animals were eating.

The fisher is one of the few wild creatures capable of killing and safely (most of the time!) devouring a porcupine. The smaller porcupines, especially, are attacked on their faces, eventually tire of the attack and then are approached at the quill-less belly. The carcass of a porcupine turned inside out can invariably be traced to the work of a fisher. A friend who lives along Lake Michigan east of Sturgeon Bay found such a carcass.

In that same general vicinity Carl Scholz came upon numerous fisher tracks in the snow, as did Charlotte and I in a nearby woods. A rapidly moving inquisitive animal could easily be noted by the wide-ranging tracks. Evidently the fisher was in search of a den where the young would be born and reared in later March or early April.

An unfortunate discovery following careful observations has been made by our raptor-banding friend, Tom Erdman, in northern Wisconsin, prime fisher country. His northern goshawk nests have been heavily preyed upon by the fearless fishers who take eggs, young and even the adult females from the nests.

A recent conversation with Tom indicates that the fisher is still a problem with nesting birds. In fact he actually found a fisher high up in a goshawk nest in the Nicolet National Forest. He said that some ground nesting birds are also succumbing to fisher predation. Wisconsin now has more fishers than Minnesota.

In the Nicolet National Forest only one nest of 18 red-shouldered hawks, a state threatened bird, produced young during the 1992 breeding year. Both bird populations, according to Tom, are in jeopardy! The only parts of the birds they don’t eat are the feathers; skull, bones and everything else is consumed. Quills are about all that remain from the porcupines that have been killed and eaten by fishers.

The preferred habitats of these large dark brown “weasels” are cool coniferous forests and swamps. Some biologists feel that fishers might be the fastest tree travelers of all mammals. What is known is that they shun people.

I like the thought of successfully bringing a once-extirpated mammal back into our state. On the other hand I fully realize the deep trouble some of our birds of prey are having. Hopefully some sort of compromise can be reached whereby both the goshawk and fisher can survive. Perhaps it boils down to the fact that better population control of the fisher needs to happen to protect native nesting birds.