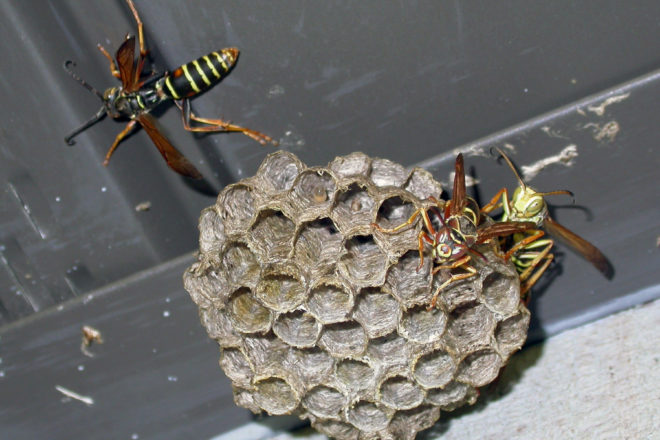 A wood wasp nest has symmetrical chambers in which the eggs are laid. Photos by Roy Lukes.

Throughout our lunch hour paper wasps, or what we call wood wasps, flew back and forth past our front windows. Later I couldn’t resist basking in the sun for a while on the Leopold bench near our front yard flower beds. There I saw what appeared to be a sparring match of individual wasps, which was most likely between males who are constantly on the lookout for the young, newly emerged females, or princesses, with which to mate.

The newly mated princesses will hibernate in wood or rock piles, or under dead vegetation on the ground, while all the founding queens, workers (unmated females) and males will die. The young females will imbibe on as much high-energy nectar as they can possibly find in order to fatten up and increase their chances of surviving the winter.

When spring arrives, a queen will construct what appears to be a tiny upside-down umbrella, her single layer of beautifully constructed six-sided brood cells. Tiny bits of wood for their nests are usually gotten from weathered wood, old rotting fence posts or boards, or even cardboard found outdoors. The wood is chewed, partially digested and mixed with saliva, then smeared onto the nest surface where it hardens upon contact with air. (Do you suppose these wasps were among the first paper-makers to inhabit the earth?) 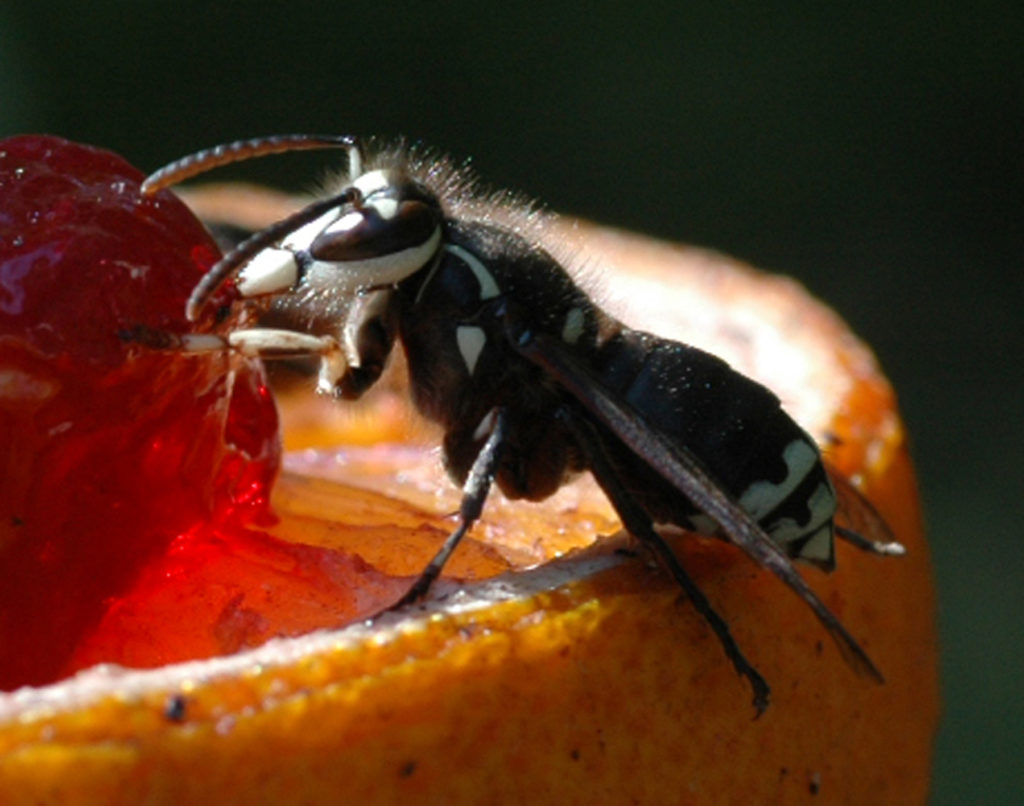 The bald-faced hornet is not yellow and black but white and black.

Next, a single fertilized egg is laid inside each of the chambers. The eggs hatch in about two weeks, and the carnivorous larvae are fed tiny bits of caterpillars for about two more weeks until they are fully grown. A thin silky coating is produced by the queen to cover each of the openings, and within three weeks each pupa emerges as an adult female worker.

The entire generation has been carefully raised by the queen. However, once the female workers have hatched, all having brownish faces and straight antennae, and who are capable of stinging, the queen will stop foraging and rule by dominating her offspring workers. They will carry on all the work of feeding and caring for the developing larvae, a form of classic dominance.

In case a queen dies or is lost, then the most aggressive worker takes over, begins laying eggs and continues to dominate over all below her. She has not mated and can only lay unfertilized eggs. These develop into males who have whitish faces, small hooks at the ends of their antennae and cannot sting.

Ever since we moved into our home in the woods, the wood wasps have constructed quite a few of their intricately made umbrella-like nests, usually on the underside of the deck or soffits on our house. Only once, when a female accidentally dropped down my wife Charlotte’s shirt collar, was she stung. One sting in nearly 30 years isn’t so bad. (Don’t tell that to Charlotte!)

I recall many experiences sitting in the outdoor privy on my dad’s farm, apprehensively eyeing the long-legged paper wasps entering and leaving through the crack at the top of the door. There always seemed to be several of their nests attached to the outhouse ceiling, but I don’t remember anyone complaining of having been stung.

The very fact that the paper wasps kill many potentially harmful caterpillars makes them valuable to have around vegetable and flower gardens. They are only one of thousands of life forms that enable us humans to live. They must have their niche on Earth, too, partners in nature to be respected.

Warm sunny early autumn days, when people want to get out for one last picnic before the cold weather sets in, can present a problem as pesky wasps or hornets try to carry off bits of food or are attracted to open soda pop cans or even get inside them. 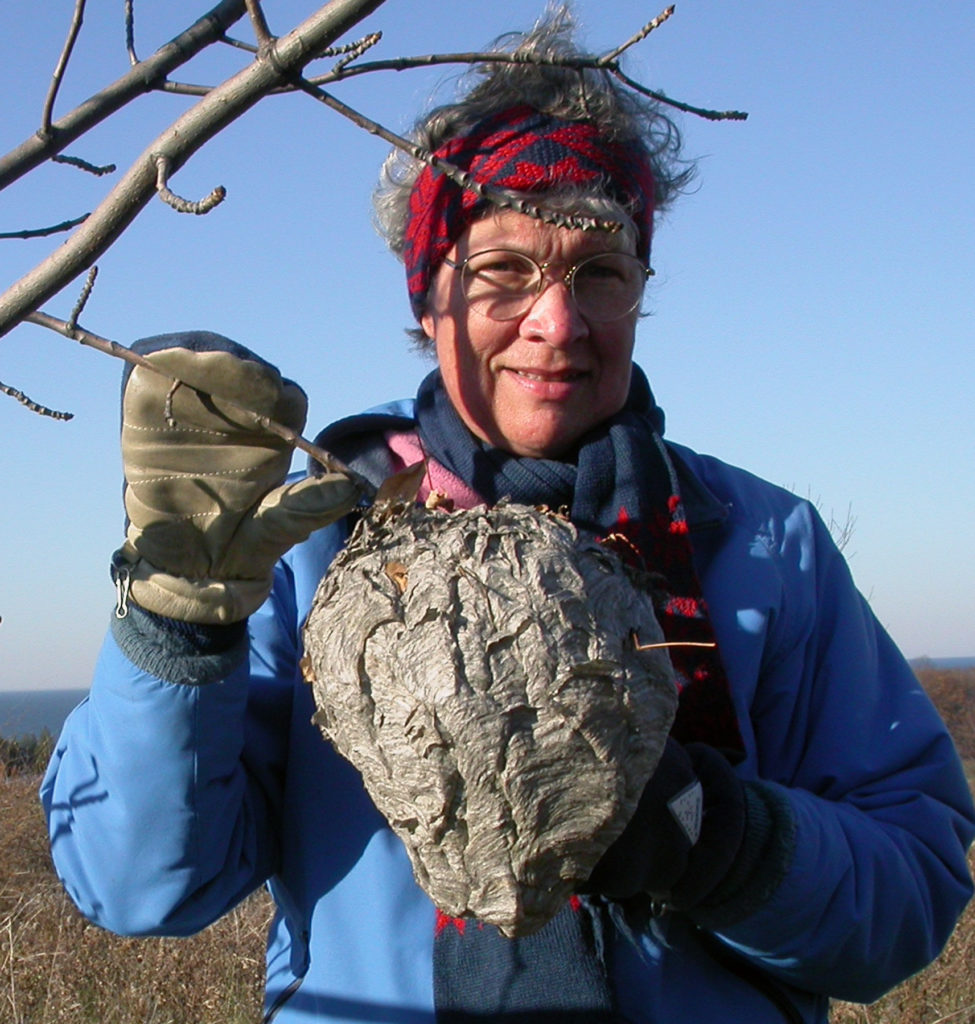 Charlotte holds a bald-faced hornet nest that is dormant for the winter.

Technically these insects common to Door County are wasps. The only true hornet in the U.S. is the European hornet, which I strongly suspect is very uncommon in our region. Chances are quite good that the most dreaded uninvited guests at picnics will be the so-called yellow jackets, black with yellow bands on the abdomen, and often not much larger than a common housefly.

Keep your distance and give your utmost respect to the white or bald-faced hornets that have built the gray, “paper-covered,” football-size or larger nest, perhaps in a tree or up against the gable of the house. They and the yellow jacket hornets, which usually build their nests underground or in a wood pile, etc., are known to be easily irritated and ornery, and they appear to dislike people. Unlike honey bees, they can sting repeatedly. Paper wasps, which build the small inverted umbrella-like nests, as described above, are docile and seldom sting unless molested or are unintentionally trapped, swatted at or chased.

Most wasps are solitary in nature but a few dozen of the 1,000-plus species are social and have definite casts. If you are so unfortunate to have a wasp nest too close on your property to your activities, especially if you are very allergic to their venom, hire an expert to get rid of the nest.

Be a genuine partner in nature by providing wasps all the room they require to carry on their important lives.