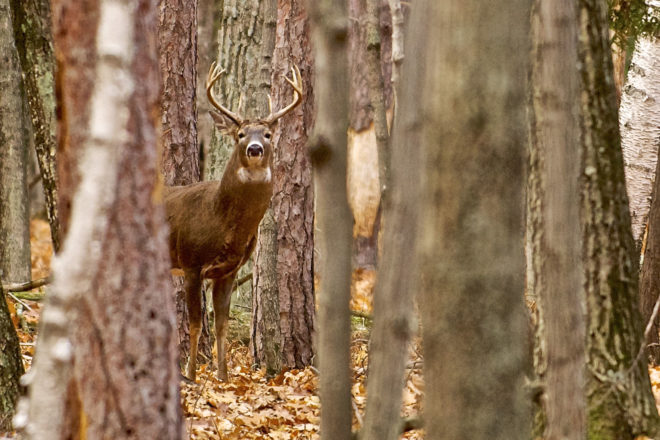 Editor’s note:  While Roy Lukes died at the age of 86 on June 26, his nature articles will continue to live on in Door County Living with the help of Roy’s wife, Charlotte, who has agreed to continue providing work from Roy’s extensive archives. For that reason, the article includes both their names.

Everyone knows how children (and a few adults) relish chocolate and ice cream. Perhaps the two most desired foods of the white-tailed deer in autumn are sweet corn and apples. We had many deer tracks in our corn patch when we had a large vegetable garden years ago, as well as activity near an old sport of an apple tree nearby.

Fortunately the apples were wild and wormy and we had planted more sweet corn than we could possibly consume ourselves. Ordinarily I don’t become too attached to deer, especially those frequenting the garden, but the six-pointed buck and doe we often saw were exciting to watch.

Naturally Charlotte and I shuddered a little on opening day of deer season to hear the expected “BLAM, BLAM, BLAM” of the rifles in the woods near our home. Surely by now the young buck has most likely been transformed into venison sausage and the lucky hunter is happy with his successful experience.

Let’s face it — deer are a public resource. I like to see them alive and to try to photograph them. To others, deer hunting provides recreation, a challenge, good fellowship, exercise and a chance to enjoy the outdoors, and hopefully some wholesome meat, a hide and a trophy to hang on the wall.

An estimate nearly 30 years ago placed the value of each deer harvested in the U.S. at about $1,250. Included in that figure were license fees, food, lodging, entertainment, hunter’s clothing and equipment, travel expenses, lost earnings and butchering costs. Imagine what that total would amount to in today’s economy!

How eagerly my brothers and I, attending grade school in Kewaunee in the 1930s, looked forward to a Sunday afternoon in spring when my dad would take us out to Lipsky’s Swamp to see the deer. It was an exciting event even though they were enclosed in a large pen several acres in size. My dad’s main objective was to get a couple bushels of dried peat for his gardening. Ours was to get to scratch the friendly deer’s noses through the fence and to admire them. 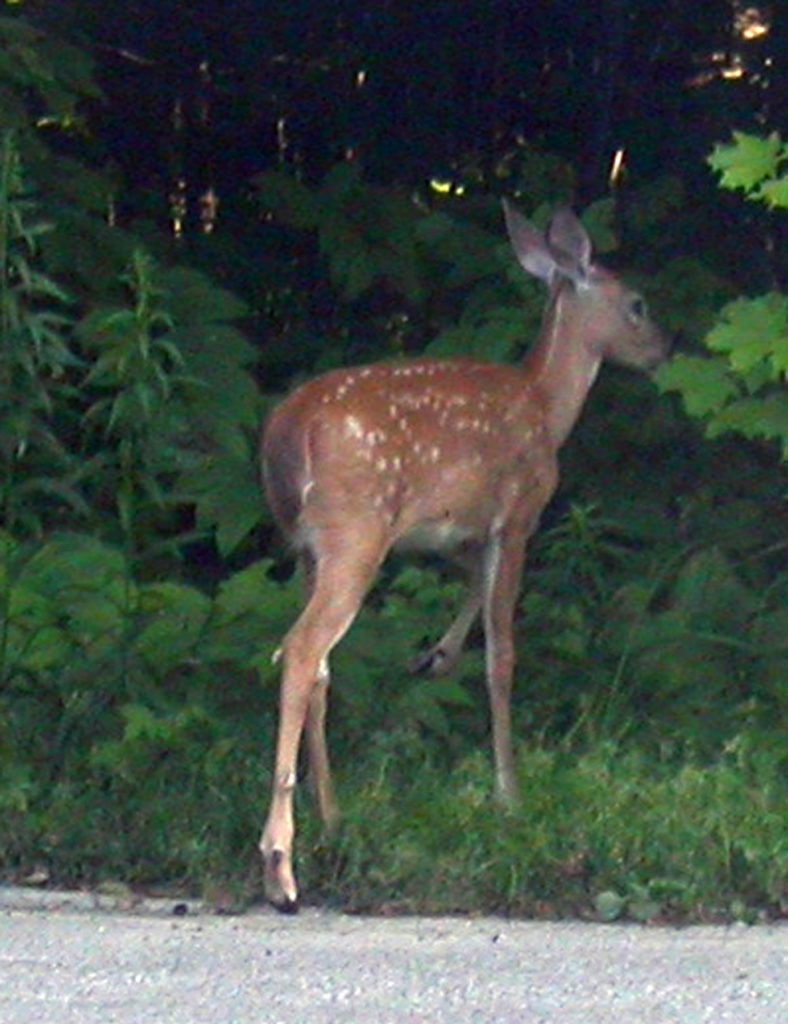 Fawns are usually born in early June but can appear as late as November if a young doe is not bred until February. Photo by Roy Lukes.

The deer herd in that part of the state, including Door County, was then on the upswing after having hit a low in the early 1900s. As an example, no deer were reported from either Door or Kewaunee counties in 1912. Now they appear to be coming back in greater numbers. We have seen does and fawns near our front yard for the past three summers.

Deer are browsers, not grazers. They much prefer the tender shoots, twigs and leaves of woody plants more than grass-like vegetation. If they, in their ranging, come across some of their favorite foods they will remain in the area until the supply is exhausted. Their prime choices include acorns, beechnuts, hazelnuts, apples, corn, cabbage, lettuce and newly fallen leaves. Reading this list makes it easy to understand the fact that deer have adapted, in some areas at least, almost too well for existing conditions. 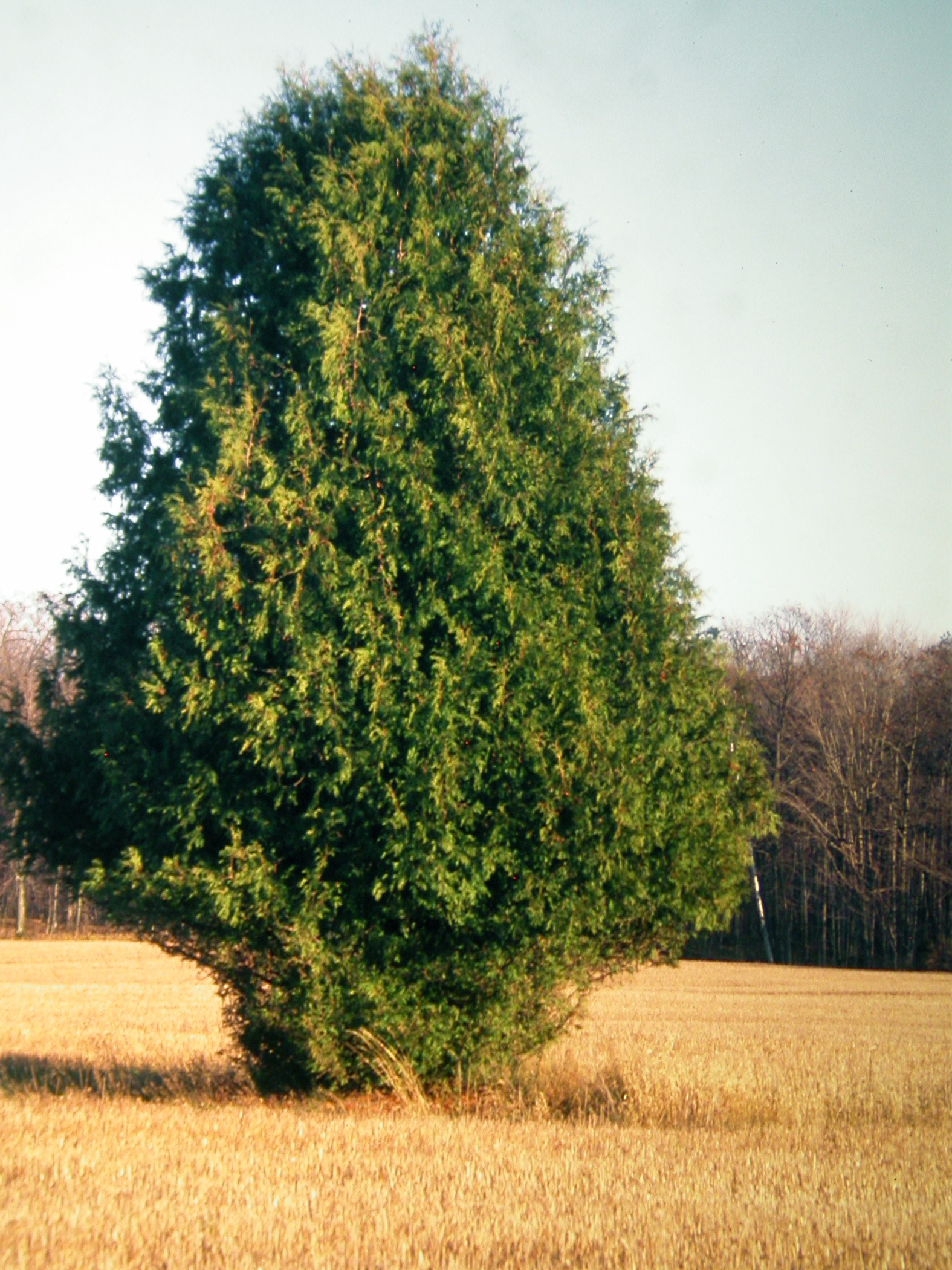 A white cedar tree shows deer browse around the base. Photo by Roy Lukes.

With most of their natural predators, including wolves, lynx and cougars having been greatly reduced, a large number of deer, especially where the snow is deeper, starve to death. Plainly and simply the food must provide them with heat and energy, promote growth and reproduction, and protect against deficiency diseases. As the natural food supply becomes over-browsed, coupled with deepening winter snows, the deer must accept food far down on both the scale of palatability and nourishment. Now they resort to their starvation foods such as red pine, balsam fir and spruces. Balsam fir stands at the head of the list of unfavorable winter foods eaten by Wisconsin deer; obviously this strongly reflects the condition of the winter range of many of these animals.

One of the preferred foods of deer in the upper Midwest is eastern white cedar, or Arborvitae. Since deer are creatures of habit and have their favorite runways and browsing locations, you will see some stands of white cedar “trimmed” as high as the deer can reach, often while they stand on their hind legs. In other areas the cedars are untouched. They are just not in the areas of regular travel for the deer.

Several years ago friends who had been hiking in one of our state forests found a perfect set of antlers. Both antlers were naturally shed by their owner and were found individually a hundred feet or more apart and on different days, as though the whitetail lost the first one day and the other the next day.

Fortunately the antlers had not lain on the ground for long as evidenced by only a few nibble marks on the tine tips, the result of perhaps a white-footed mouse’s gnawing. Each antler sports five tines making that buck a 10-pointer. One of the tines has a half-inch stub on it that, by a good deer hunter’s rule, would not constitute a legitimate point. Supposedly a tine must measure at least one inch long to qualify as a point. 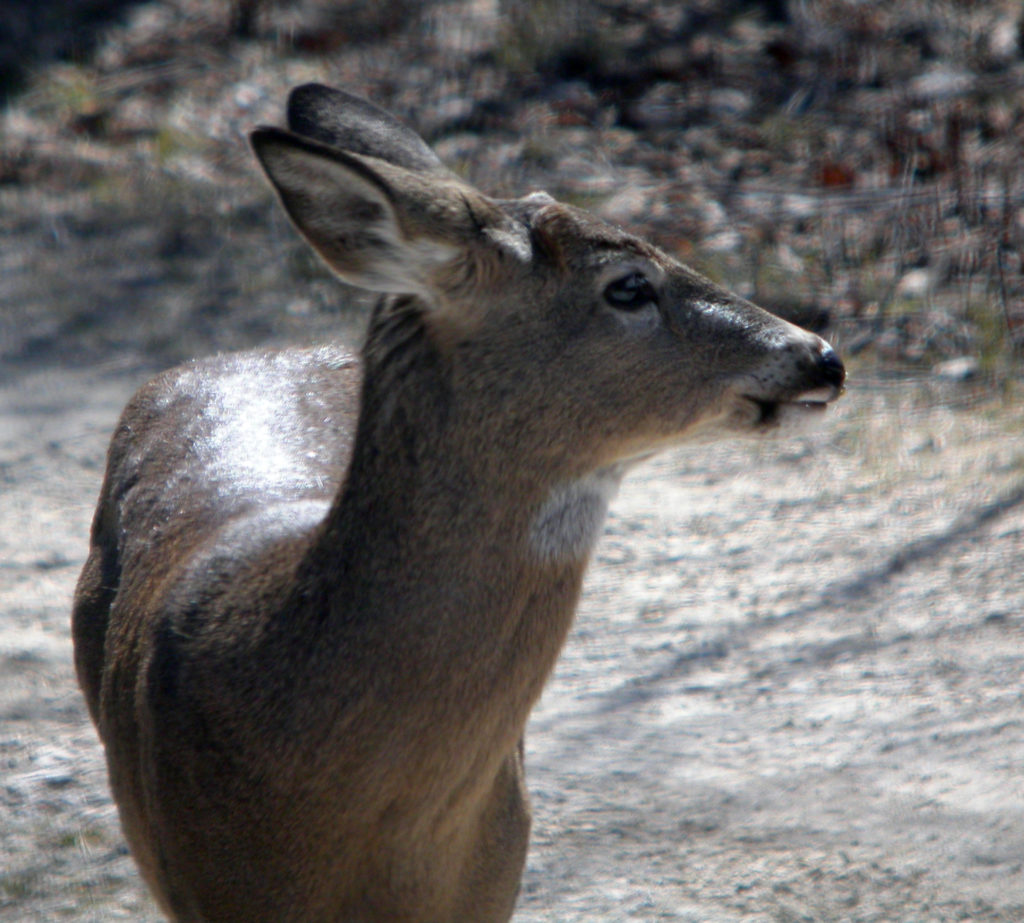 These fascinating deciduous osseous (boney) structures rank among the most rapid-growing of all animal tissue. The fact that a grown male deer, caribou or moose will produce and shed his antlers every year makes this concept all the easier to accept. Don’t confuse antlers with horns. Cattle, sheep, goats and antelope have horns and they are usually permanent.

A buck deer in his first year sports only tiny knobs where, in future years, antlers will grow. In many instances one has to feel for them since they are so small. You may have heard of a “button buck,” a first-year animal with half- to three-fourth-inch knobs.

Next in line comes the “spike buck” stage, in his second year, with spikes four or five inches long. However, give a buck deer ideal feeding conditions, including food rich in calcium and phosphorus, and he will develop small forked antlers in his second year. In other words the deer will be about a year-and-a-half old and already be considered a “fork buck.” Some hunters will call this a “crotch” or “Y” buck. 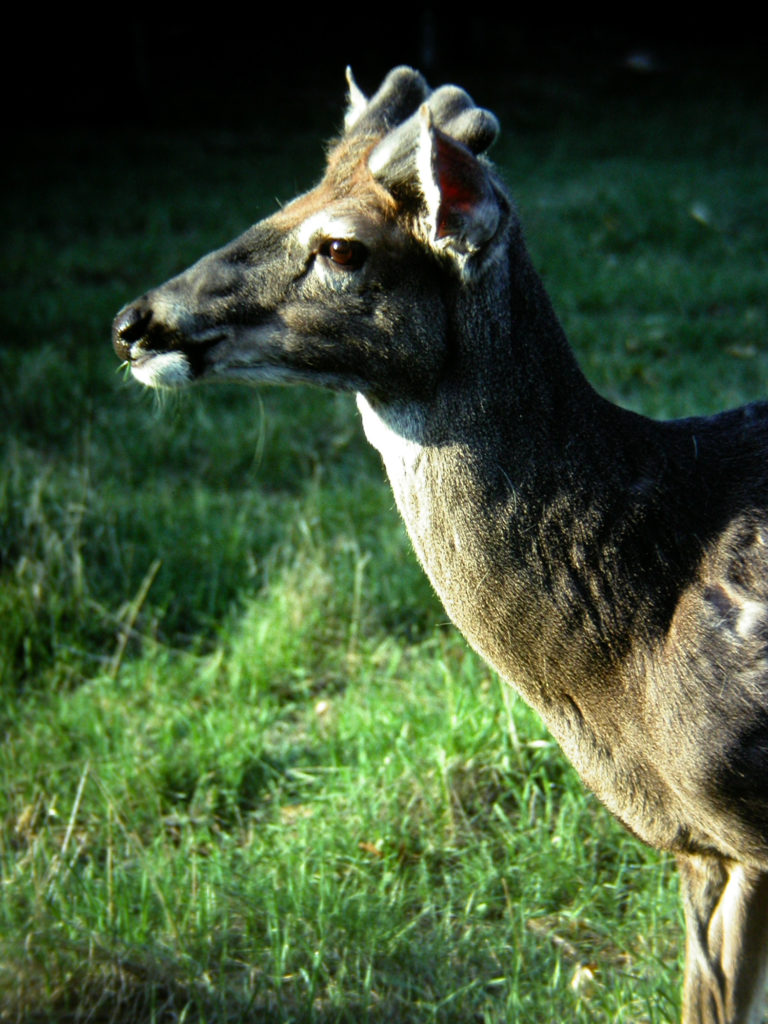 This “spike buck” has four- to five-inch antler growths in its second year. Photo by Roy Lukes.

A “rack buck” will have developed his branching antlers, barring injury or disease, by 30 months of age. The growth begins in spring as a form of skin called velvet, containing blood vessels and nerves and covers the newly emerging knobs. A buck is in velvet until near the end of August when cells begin to grow at the base of the antlers, cutting off the blood supply. The velvet dries, darkens in color and according to the “experts,” begins to itch. (Pray tell me how they ever figured this out!) Now the buck finds a supple willow or aspen or red pine and works incessantly at rubbing off the velvet.

Trees that have been used by a buck for scratching away the velvet will have a portion of the bark peeled off and are called buck-rubs. The favorite species by far on our property is the small-toothed aspen, or quaking aspen.

Rutting season begins in late September to early October and may, in some instances, extend into late December. Occasionally a young doe will be bred as late as February, accounting for spotted fawns seen into the following November.

I would be the last to oppose the legal shooting of deer. A proper balance between the deer population and available natural food must be maintained. The variable quota system of killing them appears to have been working very well in the past in Wisconsin. Enjoy the deer in whatever way meets your fancy. I will continue to prefer the lithe beauty and grace of live deer and the great challenge of capturing their elegance on film. Hunters will help to maintain at least some semblance of a healthy balance between the deer, the land and its plants.