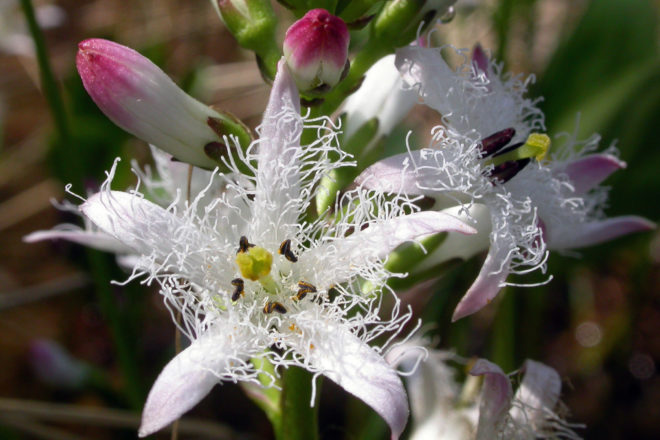 Buckbean or Bog Bean flowers are gorgeous in bud and fully opened. Photo by Roy Lukes.

My first introduction to a quaking bog occurred 74 years ago. That’s when the boys’ seventh and eighth grade Sunday school teacher took our small group on one of our “after church” hikes to Seidel Lake southwest of Kewaunee.

Not only did we see our first Ruffed Grouse there but also the amazing carnivorous Northern Pitcher Plant. The sight of its leaves and the very brief story about them left an indelible impression in my mind. I later spent 27 years working closely with these plants of great renown at The Ridges Sanctuary. 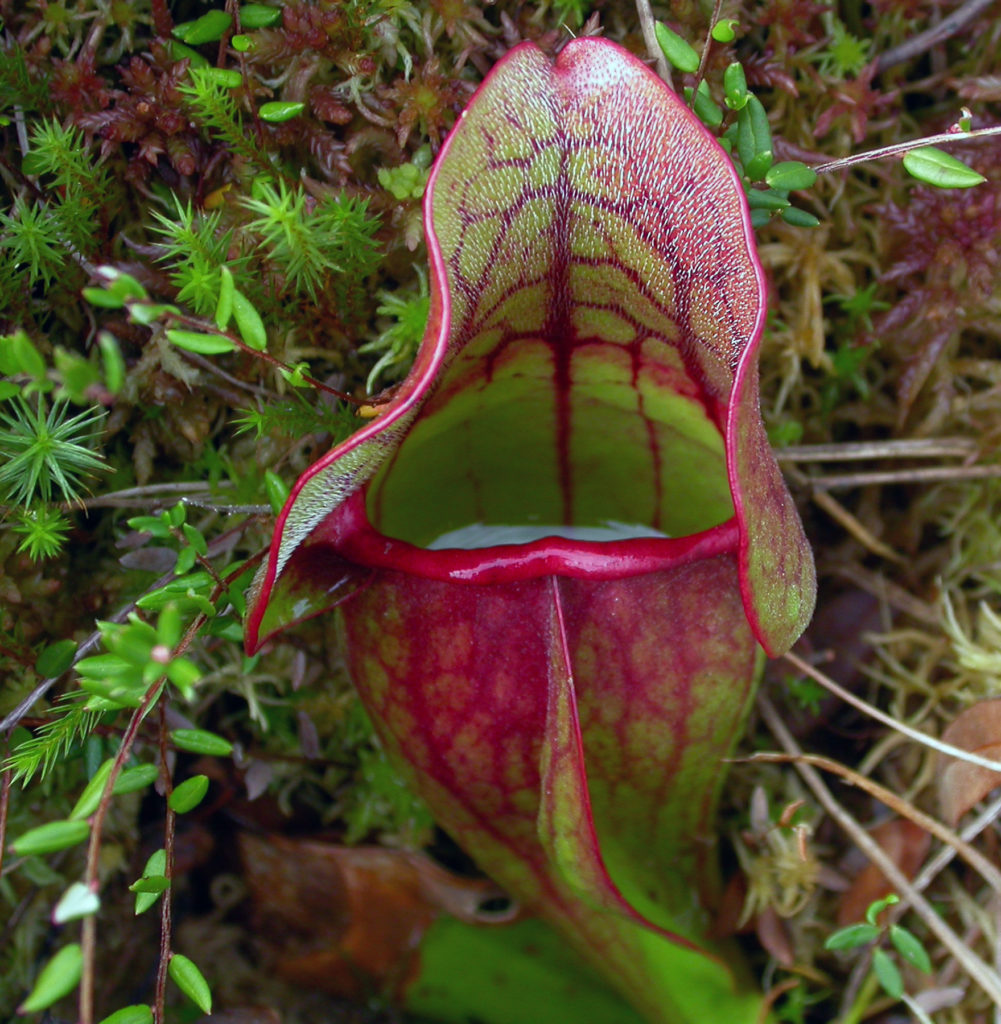 A Northern Pitcher Plant leaf is full of water waiting for the next insect meal to drop in. Photo by Roy Lukes.

The hollow rain-holding, bronzy reddish-green leaves remain in very good working condition from spring until the snow flies and are among the best attention grabbers I can imagine for those seeing these bog plants for the first time.

The very wettest parts of acidic sphagnum bogs are its favored habitats, where they are known to grow by the hundreds on the floating or quaking vegetation at the edges of the land-locked bog ponds and small lakes.

By far the easiest and most comfortable location for getting within inches of pitcher plants, without having to get your feet wet and muddy, is at The Ridges Sanctuary in Baileys Harbor. There, genuine bog-like conditions exist — home to wild cranberries, Water Horsetail, Round-leaved Sundews and, naturally, Northern Pitcher Plants.

Among the 10 pitcher plant species that inhabit the U.S., the Northern Pitcher Plant is the only one that grows in Wisconsin and can tolerate a cold climate. The often rain-filled leaves of this perennial freeze solid in winter, thaw out the following spring, capture insects and other tiny creatures, thereby providing much-needed nitrogen to the plant, and soon give way to brand new leaves as summer approaches.

A wonderful experience of 49 years ago was brought to mind while reading some handwritten notes in Emma Toft’s copy of Homer D. House’s Wild Flowers book that I had borrowed. Written among her many dated anecdotal records in the book was the following:  “Roy Lukes and Carl Scholz took me to Mud Lake in a canoe to see the exquisite white water lilies floating above their beautiful reflection. The fragrance was as wonderful as ever. We portaged the canoe to the creek via Ridges Sanctuary 20 acres. Saw black duck, wood duck, bittern and blue heron all on their home grounds. August 14th, 1967.” 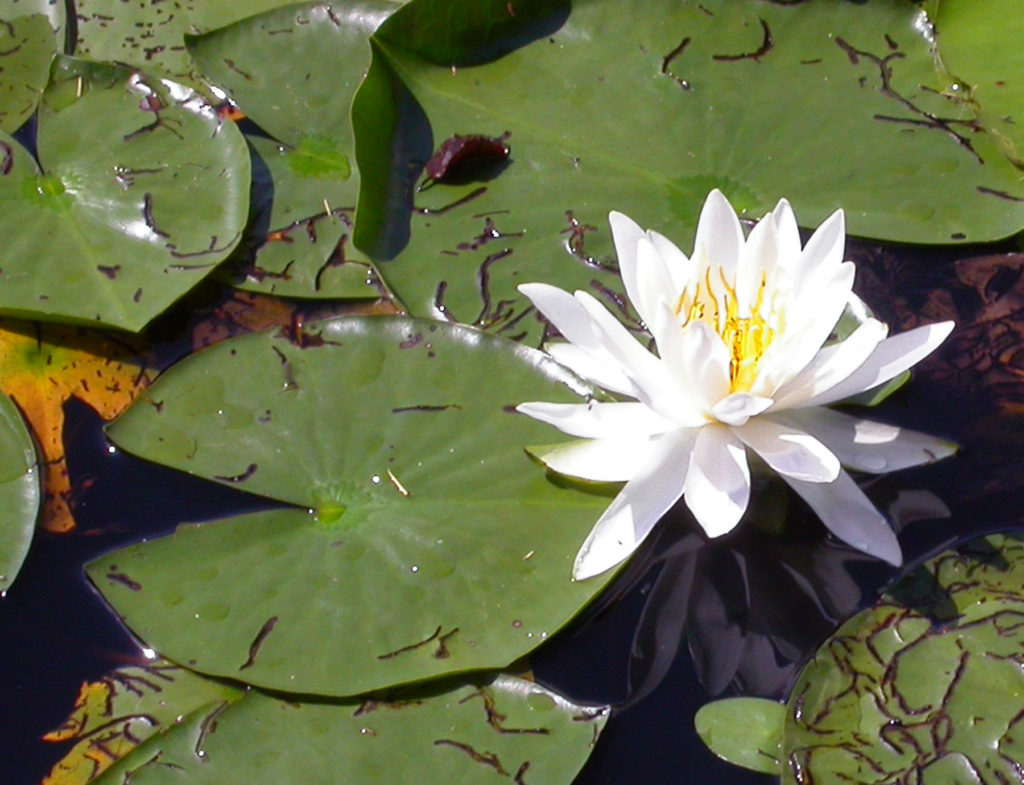 White Water Lilies open in the morning and will close by early afternoon. Photo by Roy Lukes.

The sweet-scented White Water Lily is open from approximately 7:00 am to 1:00 pm, as an example. Upon closing, four long boat-shaped sepals, that are reddish on the outside but white on the inside, completely surround the petals. I remember seeing a time-lapse movie of water lilies opening in slow motion, breathtakingly gorgeous.

When you drive on the Kangaroo Lake causeway you may see a few White Water Lilies but the more common one on the north side is the Yellow Water Lily, also called Spatterdock. The rather small water lily family has the name Nymphaeaceae, an impossible word to try to pronounce (nim-fee-A-see-ee). There are only eight genera and 90 species worldwide.

There is a small but spectacular family of flowers that perfectly represents the month of June, the iris. Bordering this family on one side is the huge dazzling lily family, and on the other side, not to be outdone, the attractive and alluring orchid family.

One would have to search far and wide to locate a flower more perfectly suited for the bees than the Blue Flag Iris. It is a large showy blue flower, favorite color of bees, has ideal landing platforms, fascinating structure and patterns of nectar guides to follow and a copious quantity of sweet nectar. 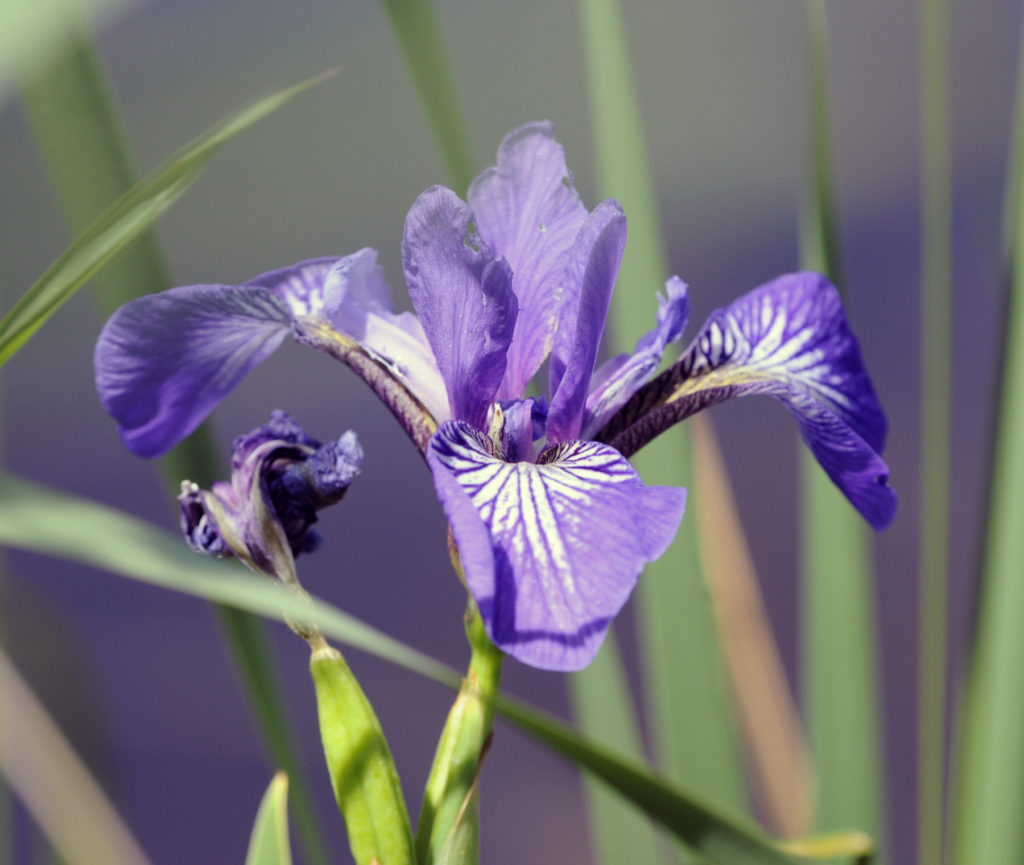 Iris is the Greek name for the rainbow. The distinctive shape of the iris led it to be called the flower of chivalry, with a sword for a leaf and a lily for its heart. It was the model for the well-known “fleur-de-lis,” a device common in artistic design and heraldry.

There are more than 200 species of irises in the Northern Hemisphere, most of them native to Asia. The many varieties of bearded irises in cultivation rank high in popularity along with the smaller, more slender beardless Siberian Irises.

Gray’s Manual of Botany lists 10 species for central and northeast U.S. including the Yellow Iris, I. pseudoacorus, that was introduced from Europe and has become naturalized here. In the proper environment they can grow six feet tall.

By far the most widespread species is the Blue Flag, I. versicolor, also referred to as I. shrevei by some modern botanists. This is the iris of marshes, swamps, wet thickets and shores of ponds and streams. At one time my favorite huge wild garden of these lovely blue irises was also home to thousands of leopard frogs, to give you an idea of the preferred habitat of these stately erect wildflowers.

A long time ago several people were studying wild plants of the wetlands with me when we suddenly came upon some smartweeds in blossom. I told my companions the common name but the genus name escaped me momentarily. And wouldn’t you know it, someone had to ask me what it was. As quickly as I said that I didn’t know, one of my friends, Evie, piped up with, “Oh, I think it is Intelligentsia.”

To make matters worse, I accepted her answer for about two seconds, until I realized she pulled a fast one on me! No, the genus name was not Intelligentsia but rather Polygonum, pronounced “po-LIG-o-num.”

There are so many other wetland flowers that one can see in many of the parks and preserves in Door County or along shorelines or roads with wet ditches. Joe-pye Weed, Kalm’s Lobelia, Purple Gerardia and Boneset are just a few. Later in summer and into fall the fringed gentians will show their four-petaled blooms along some Lake Michigan shorelines.

One plant that not many people know grows in the wet swales of The Ridges Sanctuary and can easily be seen near some of the bridges. That blossom is an exquisite pink and white with petals decorated with curly fringe. That is the Buckbean, also called Bog Bean, Menyanthes (men-ee-AN-thees) trifoliata (try-fo-lee-A-ta). Menyanthes refers to the sequential opening of the flowers from lower to upper parts of the plant. It is also found in Europe and Asia. It is the only species in the genus. 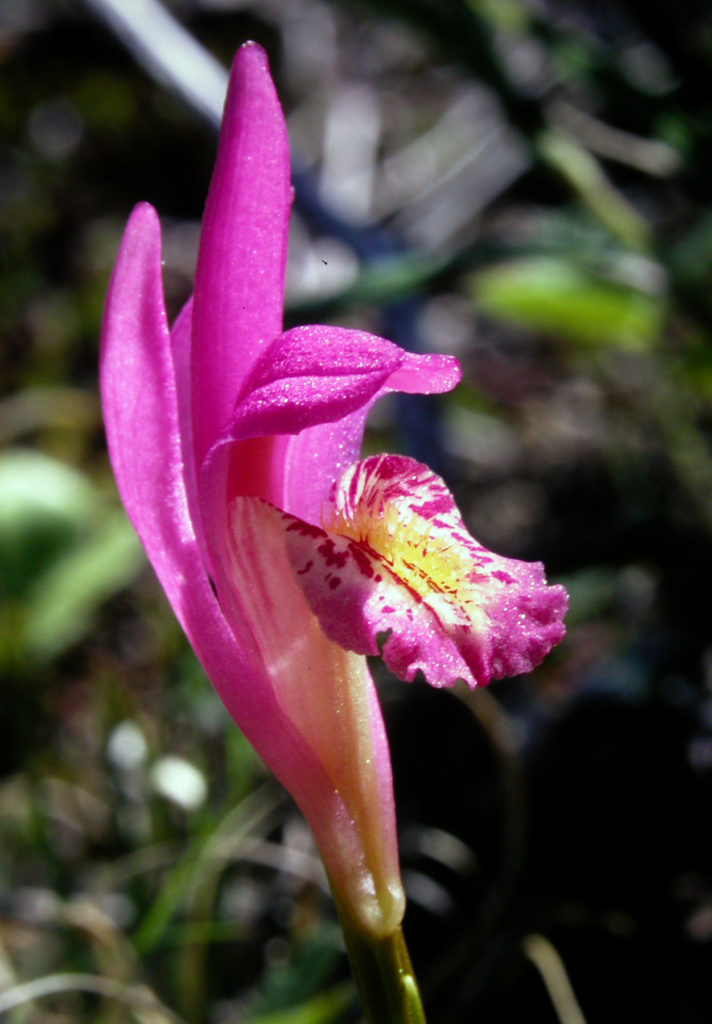 Another group of plants associated with wet areas are some of the wild orchids. Arethusa bulbosa and the rose pogonia look very similar. The first is also called the Dragon’s Mouth Orchid and the second is sometimes called the Snake’s Mouth Orchid. Grass Pink Orchids used to be quite abundant along Ridges Road across from the lower range light. However, trees have taken over the site and have shaded out most of the plants.

Spotted Jewelweed, or Touch-me-not, is a perky orange flower of the wet edges of ponds and quiet streams. It is in the impatiens family and has seedpods that, when squeezed slightly at the ends, will instantly pop open and disperse the tiny seeds for several feet.

Enjoy these wild colorful flowers but take care to step lightly and cautiously when walking along shores and beaches so as not to trample any other small plants surrounding them. Learn what is growing in your nearby wetlands and do all you can to protect them and ensure there is clean water for their survival.