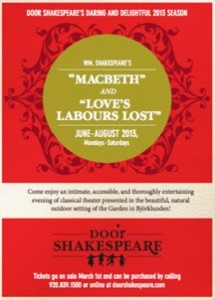 Planning for the 2013 season is well underway for Door Shakespeare, and they are excited to announce what’s in store for next season. Along with the selection of two plays never performed by Door Shakespeare, they will introduce a new model of artistic leadership—they are bringing multiple like-minded artists together to create a team of Artistic Associates.

The additions are Jeremiah Davis, Jason Economus, Matt Foss and Jennefer Ludwigsen; these actors, directors, and scholars represent a broad spectrum of talent and experience.

Davis is a former member of the resident acting troupe at the American Shakespeare Center. He has worked in the world’s only recreation of Shakespeare’s indoor theatre, the Blackfriars Playhouse.

Economus is based in Chicago and is heavily involved with Erasing the Distance, a company that uses theatre to minimize the stigma surrounding mental illness. Most recently, Economus has directed Miss Julie with Vintage Theatre Collective.

Foss teaches Acting and Theatre History at Iowa State. In 2012, his ISU production of Six Characters in Search of an Author received the Kennedy Center’s American College Theatre Festival National Award for Outstanding Production of a Play and Outstanding Director of a Play.

Ludwigsen is a familiar face to Door County audiences after having worked with Door Shakespeare and American Folklore Theatre. She currently lives in Los Angeles, and makes her living doing commercials, television, films and live storytelling.

Door Shakespeare also announces the additions to its Board of Directors – Gary Buerstatte and Sam Perlman.

Buerstatte retired in 2010 after 33 years with ProHealth Care in Waukesha. Currently, he serves as chairman of the board of the Charles Allis and Villa Terrace Art Museums.