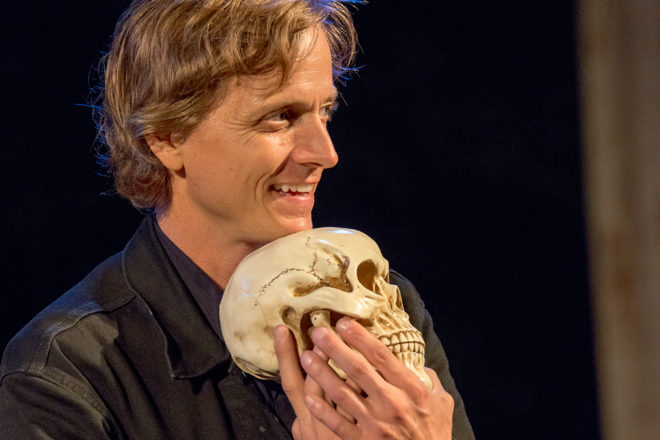 Ryan Schabach, as Hamlet, holds the skull of Yorick. Photo by Heidi Hodges.

Of all of Shakespeare’s classics, the characters of Hamlet are the ones that stand out in my mind. Each of the dozen-plus characters is distinct and memorable, their names sticking in my memory far better than the casts of Romeo and Juliet, Midsummer and others. Going into Door Shakespeare’s one-actor production of Hamlet, I was incredibly curious to see what direction the show would take, and through what mechanisms the story would be told.

Within the first minutes, my questions were answered.

As the play opens, Ryan Schabach appears on stage dressed in what I would call “heightened street clothes,” with a crown atop his head. In his opening lines, he addresses the audience as King Claudius. Then, slowly and deliberately, he places a ring on his finger, and delicately rests his hand on the railing in front of him, displaying the ring front and center. Schabach is now Laertes. A few lines later, he resumes the broad stance and voice affectation of the king before brandishing a decorative fan. With a flick, he opens the fan and places it to his breast, becoming Queen Gertrude.

These slow and deliberate actions educate the audience on everything they need to know about how the show will progress, and indeed there are a dozen or more characters still to come, each with distinct gestures, props and vocal qualities to differentiate them from one another. The elderly Polonius, for example, constantly dabs at the corner of his mouth with a yellow cloth. The timid Horatio clings to his arm like a shy child. The ingenue, Ophelia, is dressed in a soft vest and carries a bag of flowers.

These choices go a long way toward identifying each character, but they are also used in interesting ways as the show progresses, when props become separated from Schabach as a performer and stand alone to represent a character on their own.

An example comes near the middle of the production, when Hamlet sneaks up on his uncle, the king, deliberating about whether he should kill him where he kneels, praying. The crown that had signified Schabach as the king is removed from his head and placed on a stool, now becoming the kneeling king and allowing the actor to sneak up on “himself.”

In addition to the creativity on display with the character-switching mechanisms, Schabach’s performance is nearly everything you could hope for. So much of my enjoyment of Shakespeare comes from the text, and hearing the words spoken beautifully and with finesse. A great Shakespearean actor can present the dense thicket of lines in a pleasing way, and the best will unravel that thicket before you. Schabach walks that line well, taking his time to highlight the beautiful, parse the dense, and interpret each line in a distinctive way, though his portrayal of each individual character can never go very deep – he is, after all, playing 17 of them at the same time.

By pulling back the scope of a production, Door Shakespeare presents something with a focus on honesty. Fans of the text will enjoy being immersed in Schabach’s performance, pondering how each scene will play out and then being pleasantly surprised as he creatively presents each twist and turn of the story. Those who find Shakespeare a little challenging may want to read a synopsis before they go because a one-actor show, by its nature, leaves a lot to the imagination. I found it a treat to mentally fill in the gaps as the show progressed, but I admit that I’m already a fan of the original material.

Everything you expect to find at Door Shakespeare is intact in Hamlet. The beautiful staging area, the creative set design and lighting, the spirited performances – all of it remains, though with a spin that Door County theatergoers may not be used to. For me, that’s all the more reason to take in a fascinating, memorable show this summer.

Tickets for Hamlet, running through Aug. 17, are available at doorshakespeare.com.