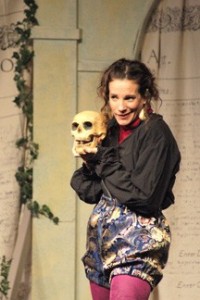 Door Shakespeare will present fall performances of The Complete Works of William Shakespeare (Abridged)! Performances will be held Wednesdays through Sundays at The Ephraim Village Hall from September 29 to October 16. A special Sunday matinee will be held on October 9 at 1:30 pm.

Door Shakespeare’s three brave actors creatively blend the best of the brilliant Bard with the bottom of the absurdity barrel to produce a farcical feast of inspired lunacy.

This show is a high-speed roller-coaster type condensation of all of Shakespeare’s plays. Written by Adam Long, Daniel Singer and Jess Winfield, the play became London’s longest-running comedy and holds the self-proclaimed world record for the shortest performance of Hamlet on record, clocking in at 43 seconds.

Tickets for The Complete Works of William Shakespeare (Abridged)! are $25 for adults, $16 for students and $6 for children. Advanced reservations are recommended due to limited seating. For more information call the Door Shakespeare Office at 920.839.1500 or visit http://www.doorshakespeare.com.