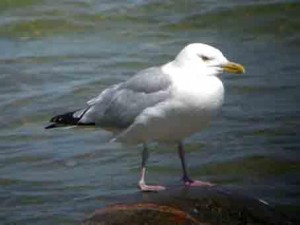 Shorelines and harbors wouldn’t be complete throughout much of the year without the sociable seagulls. Even though opinions of their presence along swimming beaches, docks, moored boats, and rooftops vary considerably, their overall positive influence and value to shoreline ecosystems remains very high.

Surely the farmers of the Dakotas and western Minnesota, where ponds and sloughs are common, would miss their “seagulls,” too. There one would most likely find the little black-headed gull, the Franklin’s Gull, very much at home hundreds of miles from the sea. Perhaps the name prairie gull would describe them more accurately. 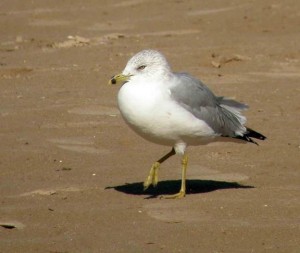 The two most common gulls of Door County and elsewhere in North America are the Ring-billed and Herring. Another larger gull which has been nesting sparingly here in recent years, the Great Black-backed Gull, is a common breeder along the east coast of the U.S. There is a fourth gull, the Bonaparte’s Gull, which has occasionally summered in Door County. These are second-year non-breeding birds lacking the black head typical of adult birds and instead sporting a black facial spot appearing nearly like a second eye.

Obviously the gulls are most associated with shore areas and have webbed feet, long wings, very harsh voices and a wide taste for food. Both the Herring and Ring-billed adults have white bodies and tails, gray mantles (top of wings and back), and a yellow bill. Other than the Herring Gull being about seven inches longer than the Ring-billed and having a distinctly lower voice, both can look surprisingly alike from a distance.

Observed from close range there are several distinctive differences to look for on the adults. Herring Gulls have pink legs and feet, and the bottom mandible of their yellow beak has a reddish spot near the tip. An adult Ring-billed Gull has yellowish legs and feet and its yellow bill sports a dark ring around both mandibles, near the tip.

In terms of gradual plumage changes leading to breeding condition of these two gulls, the Herring Gull is said to be a four-year gull while the Ring-billed is a three-year bird. These will be their ages when they begin to breed.

The pink-legged dark gulls with black tails and black bills you are seeing now are most likely Herring Gulls into their second year. By the approach of this coming winter their body feathers will have become somewhat lighter, the tips of both mandibles will be black and their brown tails will sport a wide irregular black band. Keep in mind that all birds, gulls included, become second-year (SY) birds on January first.

When their fourth year arrives they will have taken on their white plumage, have solid white tails, pearl-gray mantle and gray wings with black tips speckled with white. The lower mandible will have the red spot which, when feeding young in the nest, becomes a target at which the babies aim their food-begging lunges.

Ring-billed gulls in their first winter will already sport upper gray wing feathers and backs, their body feathers will be speckled with tan, and the tips of both mandibles will be black like the second-year Herring Gulls. The tips of their white tails will have a narrower well-defined black band, which is what you are seeing now, and their legs and feet will be light grayish to greenish, not the fleshy pink of all ages of Herring Gulls.

Bear in mind that in winter both the adult Herring and Ring-billed Gulls will show tan speckling on the upper parts of their bodies, more so on the Herring than the Ring-billed, but their distinctive adult beaks and leg color will enable you to easily identify them. Several excellent field guides, including Peterson’s A Field Guide to the Birds East of the Rockies, the National Geographic Guide to Birds of North America, and The Sibley Guide to Birds will show helpful fieldmarks of the different-aged gulls.

Back in the 1960s and ‘70s when I helped the veteran gull bander, Harold Wilson of Ephraim, band a good many thousands of gulls it was generally considered that Herring Gulls nested primarily on the small islands in Green Bay while the Ring-billed Gulls were nesters on the islands off the east shore of Door County, including Spider and Gravel Islands. This situation has changed considerably and now their nests are more commonly intermingled on the islands.

Herring Gulls are permanent residents of this area while nearly all Ring-billed Gulls winter in the South. It is the Ring-bills which have been increasing considerably in recent years. One of the largest Ring-billed Gull “clean-up crews” in northeastern Wisconsin has been nesting on dry land at the Industrial Fabrication Plant north of the city of Kewaunee, several hundred feet from Lake Michigan.

Apparently a crowd of people in the eyes of these little white omnivores is an automatic assurance of food – a crust of bread, hamburger bun, dropped ice cream cone, popcorn or apple core. If there’s food on the premises, be it at the beach, picnic grounds, or the parking lots of supermarkets or restaurants, expect Ring-billed Gulls.

If you think you know gulls you’re in for a gull darn interesting challenge in getting to correctly identify them in all of their first three and four years of fascinating plumage changes. My hat goes off to the ever-present “sanitation crew,” the winged harbor masters of Door County, the gulls.