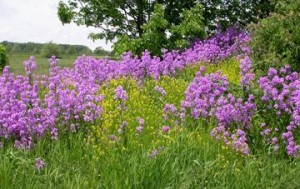 Both the lavender Dame’s Rocket and the Yellow Rocket are members of the mustard family and can become fast-spreading aggressive invasive plants. Photo by Roy Lukes.

One of the most brilliant weedy wildflowers to decorate roadside ditches, waste areas and open woodlands, Dame’s Rocket, tall and stately, is now in bloom and virtually draws music from the earth with its striking and eye-catching white to mostly lavender-purple petals. Quite a few states, including Wisconsin, include this classy flower on their invasive plants list. It’s not that great a threat in urban settings but can become established in many areas in the wild when left to multiply.

The plant was introduced from Eurasia to European gardens in the 1600s where it soon ran wild, and the colorful member of the mustard family easily made its way to North America in the 17th century where it also has run wild in some areas. Several of its nicknames, including Dame’s Rocket, allude to women. Its scientific species name of matronalis is from the Roman festival of matrons. If you’ve inhaled its sweet nighttime fragrance, its genus name, Hesperis, Greek for evening, will be quite understandable.

Its common “rocket” name is actually from the French word, “roquette,” known today as arugula, an aromatic salad green. It’s difficult to trace the “rocket” nickname of Dame’s Rocket, and my guess is that the leaves, and perhaps even the petals, will be considerably more bitter to the taste than most people could stand. It belongs to the mustard family along with edible vegetables, such as the radish, cabbage and broccoli, and hints it is edible – to a degree. Typically the flowers of members of this large family have four petals. Some people tend to confuse Dame’s Rocket with Phlox. The word “phlox” has five letters and these flowers also have five petals, an easy way to distinguish the two plants.

There is another widespread rocket flower, also introduced from Europe, which is no friend to gardeners and especially to those in farming – the Yellow Rocket, sometimes referred to as Winter Cress. Yes, it is also in the mustard family and its flowers have four yellow petals, but it belongs to a different genus, Barbarea (bar-ba-REE-a), from the fact that its young green leaves were traditionally eaten on St. Barbara’s day in early December. It is widely agreed that this common wild weed is far too bitter for most palates.

Another very abundant, weedy, perennial wild plant, imported to our continent from Europe, now in flower and enjoyed by many people, could in my estimation be called the Jekyll and Hyde of the wildflowers – none other than the Forget-me-not. Its heavenly light blue petals produce a sea of color in many woodland environments, too often at the expense of the native plants. Some of the largest expanses of this plant in the county exist in Peninsula State Park where, along with the dreadful Garlic Mustard, they dominate several of the roadside woodlands. The Forget-me-not’s scientific name, Myosotis scorpioides (my-o-SO-tis scor pea-o-EYE-dees) leads to one of the plant’s unusual nicknames, Mouse-Ear Scorpion Grass. Myosotis is from the Greek “myos” (of a mouse), and “ous” (ear), in that the short soft leaves of some of the 50 or more species are like a mouse’s ears. When the plant first emerges in May, the stem with young flower buds is coiled like the tail of a scorpion.

Charlotte and I came upon a roadside stream in western South Dakota a few years ago whose banks for several miles were absolutely inundated with a thick growth of Forget-me-nots which had completely done away with the important streamside native plants. Yes the blue expanse was quite attractive but also deadly to the native plants which should have been in place there.

In case you don’t want this attractive but aggressive plant to take over your property pull them out before they have a chance to go to seed. However, once you see flowering plants on your land you can rest assured that there are plenty of seeds already in the ground, growing very young and small plants which, in turn, will have to be tackled again next year. But eventually, with persistence and plenty of bending and pulling, you’ll conquer this beautiful weed. By the way, the plant is quite deer resistant. The state flower of Alaska, the Forget-me-not, happens to be a native species of higher and cold elevations, Myosotis alpestris.

The Dame’s Rocket, Yellow Rocket and Forget-met-not are truly only the tip of the iceberg when it comes to harmful invasive plants of Door County. Some of the pesky plants which have become quite common and well-known include Quack Grass, Crab Grass, Dandelion, Queen Anne’s Lace, Spotted Knapweed, Chicory and Canada Thistle. Others, perhaps not as well known and recognized but which nevertheless pose serious threats to the environments in which they grow, include Phragmites (Giant Reed Grass), Helleborine Orchid, European Swamp Thistle, Wild Parsnip, Reed Canary Grass, Japanese Knotweed, Russian Olive and Buckthorn.

Fortunately the several “friends” groups in the county including those of the Ridges Sanctuary, Toft Point State Natural Area, and the state parks, along with The Nature Conservancy, Door County Land Trust, Door County Environmental Council and Door Property Owners all contribute significantly toward the eradication of these unwelcome and harmful invasives. Educational literature is available from the University of Wisconsin Extension Office, and there is an excellent Web site including good photographs and pertinent information: http://www.dnr.wi.gov/invasives/photos. Our county is fortunate to have Bob Bultman leading the Door County Invasive Species Team in its work with invasive plants. The group meets at 2 pm on the second Monday of each month, lately at the Crossroads Nature Center in Sturgeon Bay.

The American Indians called the many weeds brought to their country the “Whiteman’s Foot,” a perfectly fitting description. We all are a part of the problem in a sense and it should be up to us to contribute toward a workable solution. Please pitch in and help if you can!