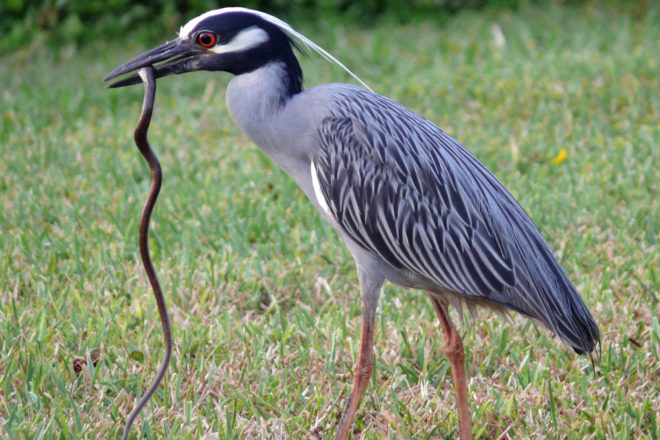 This yellow-crowned night-heron caught a slender snake for its meal. Photo by Hans Martin.

Birdwatchers are familiar with the great variety of small songbirds that visit feeders and bird baths, but other nesting species here in northeastern Wisconsin are rarely seen. One of these is the black-crowned night-heron.

This species usually breeds on the islands surrounding Door County or in dense marshes along the shores and appears mainly at dusk and dawn. Its nocturnal feeding habits may be why it was given the name night-heron. The scientific name for this species is Nycticorax (nik-te-KOR-ax), which means “night crow.”

The first Atlas of Breeding Birds in Wisconsin showed black-crowned night-herons nesting in only 10 counties in the state. We found several confirmed nest sites along the Door County islands and shorelines.

Night-herons prefer wetlands, marshes and swamps. They build their stick nests in trees, often close to the trunks, but when trees are not available, they build their nests in cattails. Horicon Marsh has a substantial number of colonies; the lower end of the bay of Green Bay has some nests; and there are a few in Jackson County.

Early studies found that their numbers were high during the last part of the 19th century, but then the use of DDT claimed many of the species that consume fish and other aquatic foods that the pesticide affected. The night-herons were no exception. Another observation found high levels of PCBs in black-crowned night-heron eggs.

The first encounter that my late husband, Roy, and I had with the yellow-crowned night-heron was in March 1977, when we visited the Ding Darling National Wildlife Refuge on Florida’s Sanibel Island. This sanctuary is a wonderful place to see a wide variety of birds feeding fairly close together because part of the preserve is fresh water, and the other is salt water.

We were inside our vehicle along the preserve’s main drive when Roy photographed a yellow-crowned night-heron. It stood motionless near the water’s edge, so we got out and walked toward it. Its eyes were closed, as if it were asleep.

All of a sudden, it began to slowly pump its head and neck up and down. Within a minute or two, out popped a pellet. We then realized that, like owls and some hawks, it regurgitates the indigestible parts of the food it consumes. Once that process was finished, it looked alert and flew off.

We picked up the pellet, and during the short time that it had been on the ground, some very tiny insects had begun crawling all over it – the next stage of returning this sea creature’s remains back to nature.

The genus of the yellow-crowned night-heron is Nyctanassa, from the Greek for “night queen” or “night lady.” This bird is especially fond of crustaceans such as crayfish and crabs. It also eats fish, leeches, insects and even young birds – any food it can swallow while living in its wetland habitat. When some friends were visiting southern Florida, they saw a yellow-crowned night-heron catch a snake. Hans Martin snapped a photo of it and shared it with us.

Night-herons are about 20 inches long – roughly the size of a raven – and have a wingspan of 44 inches. They are stocky birds, similar to the American bittern, and have a heavy beak. Night-herons tend to rest during the day and avoid the larger herons, with which they compete for food and by which they are sometimes attacked.

Most other herons are more common in the South, but the black-crowned night-heron is found nesting up to south-central Canada and well into the far West wherever there is suitable wetland habitat. It also breeds into New England and much of the Southeast, except in mountainous areas.

A few nestings of the yellow-crowned night-heron have occurred in Wisconsin, but it is not nearly as common in the North as the black-crowned. Both species need clean water and pesticide-free food to eat and feed their young.

Please work to maintain a safe environment for all wetland bird species. We humans benefit from these healthier conditions, and so do the birds we enjoy watching.