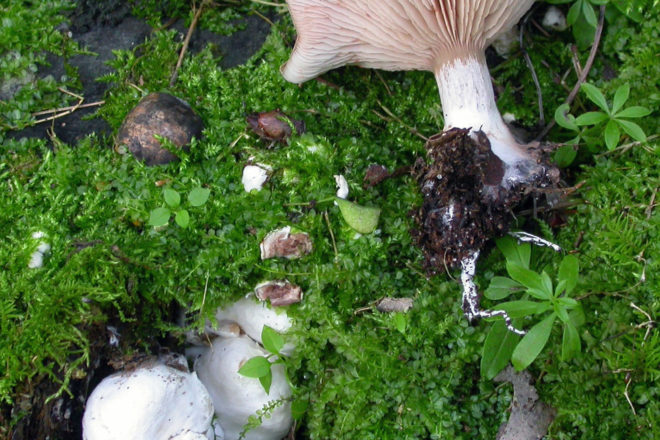 This white knob in the soil was known as the aborted entoloma, but might be another species after further DNA studies are done. Photo by Charlotte Lukes.

This year wild mushroom hunting in central northern Door County has not been very good. I keep records of rainfall and the last time my land had an inch or more of rain in one day was May 25. (Now, after writing this story, we received 1.15 inches the night of Oct. 1.) Many areas of Wisconsin not far to the south have had flooding rains during the past few months.

Spring was extremely wet with below normal temperatures. April’s 30 or more inches of snow made for a very cold start to the season. Then in May I recorded 5.25 inches of rain. A friend told me that on Memorial Day he measured the soil temperature and it was only 50 degrees. That is too cold for many seeds to germinate.

The morel mushroom season usually begins in late April for the black species and then by early to mid-May the brown morels will poke out of the ground. I did not find one morel in the favorite places where they usually appear. The best weather for morel growth is a wet spring, but much warmer temperatures are required. The soil never reached the needed warmth to aid in the production of those tasty delicacies. 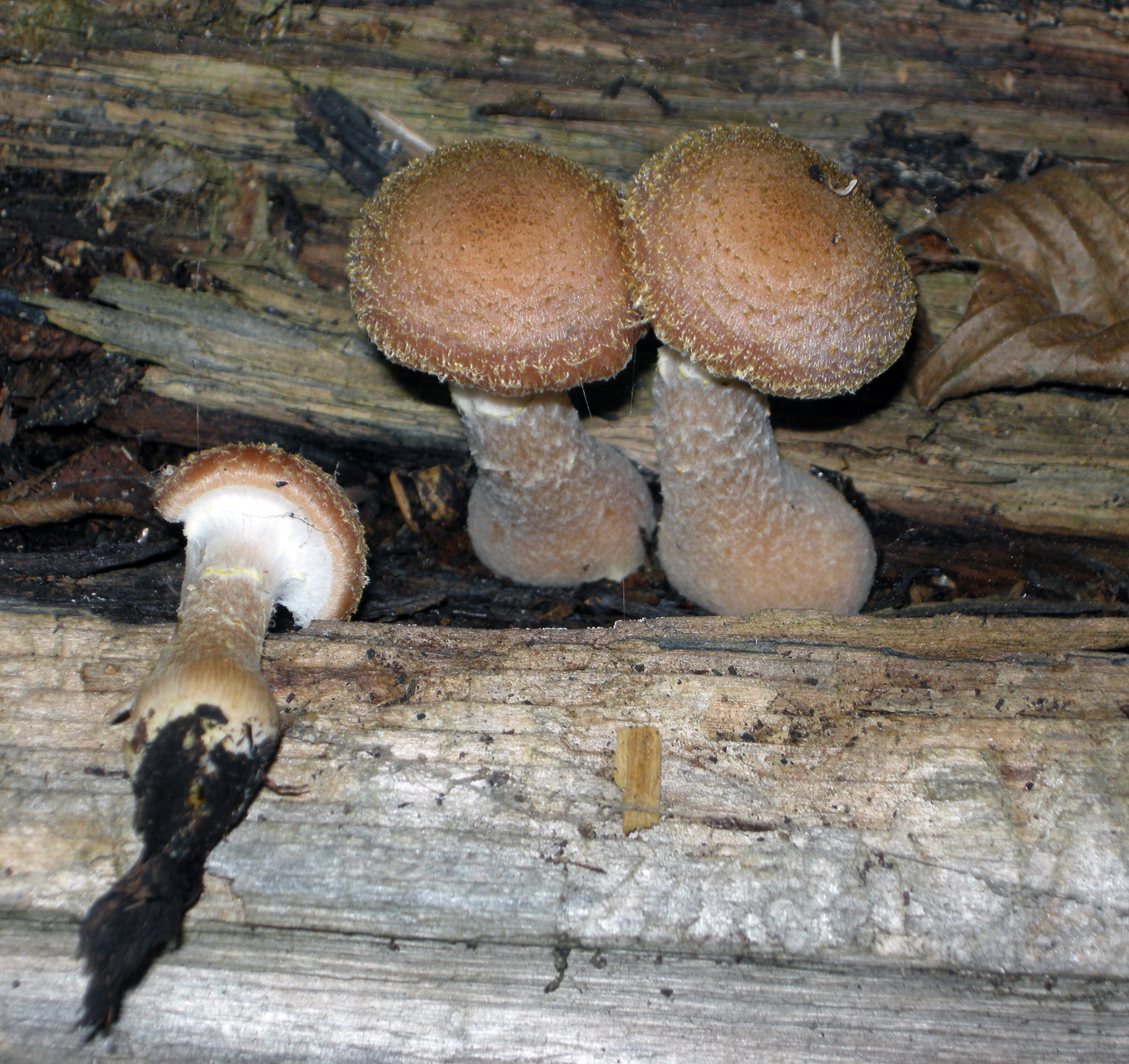 The honey mushroom, Armillaria mellea, is one of the most difficult to identify. Photo by Roy Lukes.

Most mushrooms have a normal season of growth. You never find morels in fall when so many other species can be found. Likewise many of the autumn favorites do not grow in the spring season. The golden chanterelle is one of the few good summer mushrooms, but many others do not appear until the cooler autumn weather arrives.

Mushrooms have no chlorophyll and cannot make their own food, so they must get it from other sources, often as saprophytes or parasites. They benefit from other plants and do their growing as the normal photosynthesizing plants are coming to the end of their season. Many have a direct association with specific trees. The fine threads of mycelium, the actual vegetative part of the plant, intertwine with the rootlets of trees and live in a symbiotic relationship.

I remember the explosive activity of Mount Pinatubo when its volcanic power blew so much ash high into the atmosphere that scientists said it may affect the world’s weather for two to three years. That was in early June 1991 in the Philippines. On Father’s Day (third Sunday of the month) in 1992 we had a killing frost which destroyed two-thirds of our vegetable garden. A week later we had some heavy rain and in early July I found shaggy mane and honey cap mushrooms growing. Normally these mushrooms grow in September or October after cold weather sets in.

Then, in 1993, it rained constantly from May to October. Many rivers in the upper Midwest were flooded all summer. I found, collected and identified so many mushrooms in late summer and fall. It was a bonanza!

A recent mushroom hike which I led for a small group of friends revealed that the favored honey caps were starting to appear. That is one of the most difficult gilled mushrooms to identify. It can grow on trees or on soil in woodlands. Many species are known to develop only on soil, or only on trees, so that can be confusing to the novice mushroom hunter.

In this dryer than normal season most mushrooms are being found on dead fallen trees which can retain moisture for longer periods of time than the soil. Many of these mushrooms are the thin leathery kinds or the tough woody polypores, most of which are not edible. The few fleshy gilled or tubed mushrooms that were seen on a recent hike were smaller than usual or were dried up.

The summer of 2017 was cooler and wetter than this year and several people have told me about finding giant puffballs recently. I remember in past years that these huge, round, white, soccer- or basketball-sized fungi would appear in large numbers a full year after a wet summer.

I have eaten about 18 different types of wild mushrooms and the giant puffball is low on my list of desirable edibles. True, it is a safe species because nothing poisonous looks like it, but it has no flavor. A student in one of my past Clearing mushroom classes said she takes the fairly thin two-inch square slices and coats them in a mixture of beaten eggs and milk. Then she covers them with crushed soda crackers and fries them in butter. I asked her how they tasted and she said, “Like fried soda crackers!” 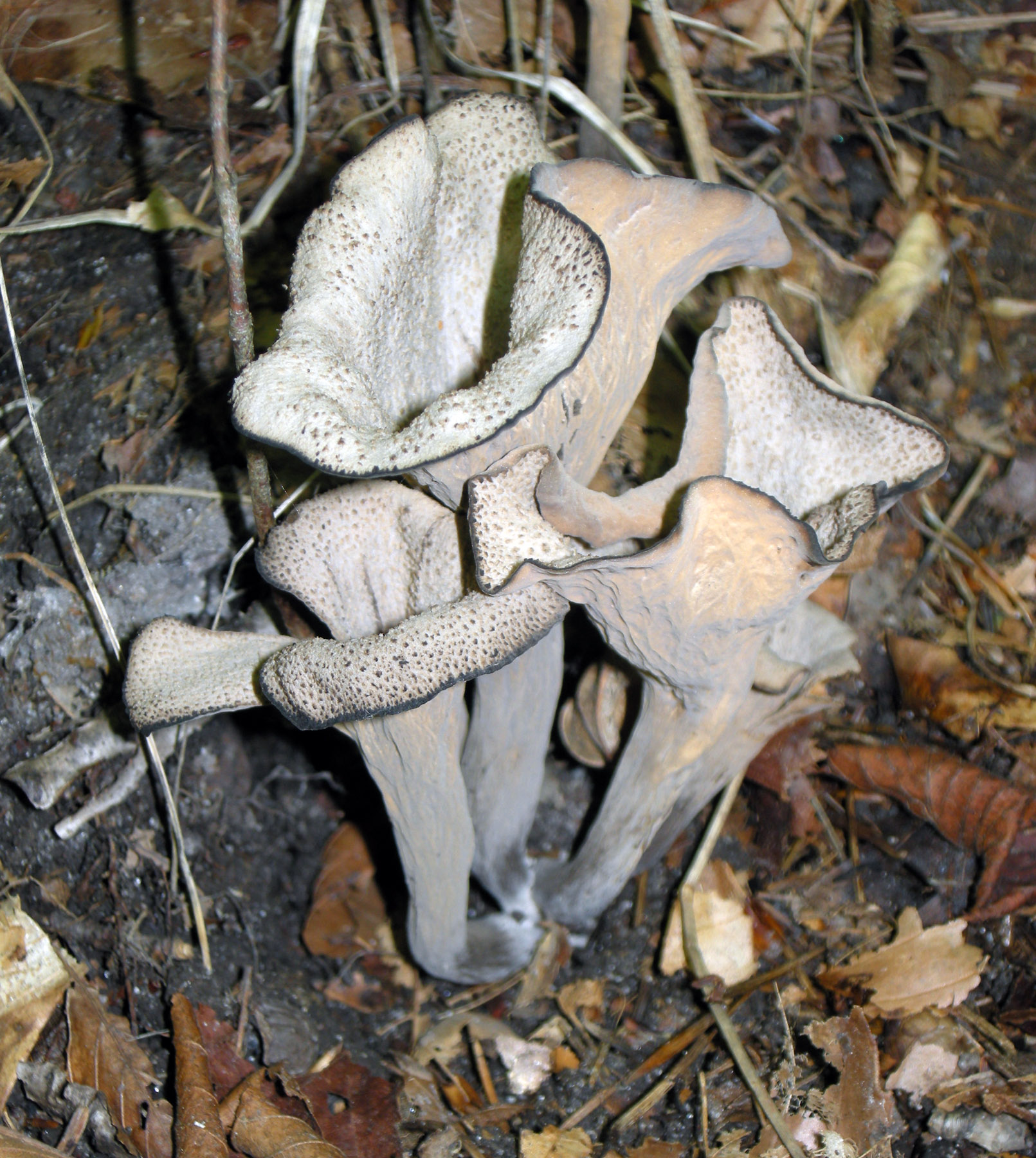 The horn of plenty or black trumpet is hard to find in the forest as it can blend in with fallen leaves or be covered by them. Photo by Charlotte Lukes.

One of the best edible species I have tasted is called the horn of plenty or the black trumpet. It is not very common and can hide on the ground in wooded areas that are covered with fallen leaves. When cleaned and sautéed in butter they become flat like a thin piece of black leather, but it’s one of the best flavored species I’ve enjoyed.

The honey cap mushroom, appearing now in many woods, is the one my father-in-law always collected near Kewaunee. In a good year they can number in the hundreds and Roy’s dad would bring home huge quantities to be cooked and canned by Roy’s mother. He said the smell in the house of those cooking fungi made Roy dislike mushrooms as a child.

Another good edible is under some study as to the exact species. Most mushroom books will call it the aborted entoloma, but recent DNA studies are now saying it is the honey cap which is being aborted (incomplete growth) by the entoloma. Stay tuned!

As long as the weather remains above freezing during the day mushrooms can continue to develop. I remember still finding many species well into November in mild autumns, but once the frigid air settles in to keep temperatures below freezing all day, then the season is over.

Here’s to safe mushroom hunting. Never eat any raw mushrooms. Always cook them thoroughly. Don’t pick a mushroom that looks good by just comparing it with a picture in a field guide. Door County has several species which have toxins that can destroy your liver and kidneys. If in doubt, throw it out!