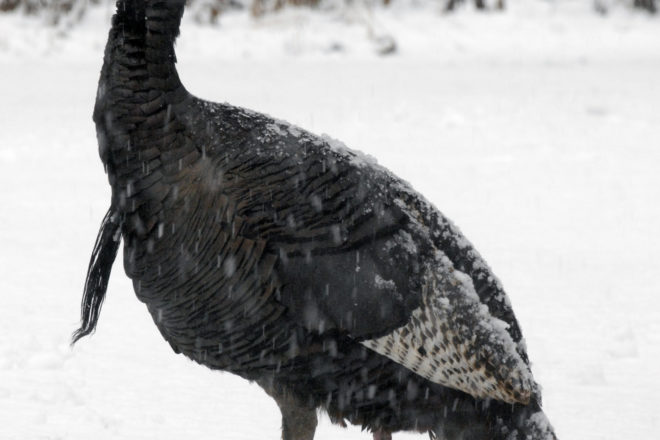 The very deep snow that has been with us since the middle of January is covering the ground in my woods to a depth of 26 inches. The food that countless wild creatures seek is buried in white and may stay that way for many weeks to come.

My friend Beth, who lives in far northern Door County, had a turkey on top of her small bird feeder. She said it was trying to be a chickadee! Another wild turkey was pecking on her glass patio door.

A week ago, I was working in my den when I heard somebody knocking at my door. When I got up to see who was visiting, I saw a turkey tapping on my window – almost begging me to put out some food for him and his two buddies in the driveway.

Wild turkeys used to be very numerous in North America in pre-settlement days. In fact, Benjamin Franklin wanted the wild turkey to be our national bird. They were no longer found in Wisconsin after the late 1800s due to loss of habitat and over-hunting.

Plumage on the wild turkey is iridescent, and both sexes have blue, featherless heads. The male has a red wattle, which I call a “lumpy double chin.” Males use their wattles in mating displays, along with their drooping wings, widely fanned tail and, of course, their gobbling.

Wild-turkey habitat varies considerably across North America, and in Wisconsin, the oak/hickory forests are preferred; thus, their population is higher in the southern half of the state. Acorns are one of their favorite foods, and they typically walk as they search for food. They are strong flyers, but only for short distances, and they roost in tall trees during the nighttime hours.

I remember one of our Christmas bird counts a few years back when Mike Madden, Nick Anderson and I were looking for birds in mid-December along the roads west of Jacksonport. We discovered a large, deciduous forest that had perhaps a dozen wild turkeys sitting quite high in the trees. The ground was covered with snow, and apparently the birds were not yet ready to get out to look for breakfast.

There are now five subspecies of wild turkeys in North America. The most widespread is the eastern turkey, whose range covers most of the eastern U.S. from Minnesota down to east Texas and northern Florida. The main part of Florida has the Osceola or the Florida wild turkey.

The ocellated turkey is found in Central America. I had never heard of this species, and I learned that it was considered the sister species to our wild turkey before the subspecies were designated. It has spectacular blue and bronze colors in its tail feathers and a blue head and wattle. Its normal range is the Yucatán Peninsula. The population of these tropical birds is declining, so conservation efforts in Mexico, Belize and Guatemala have been initiated to save the species.

Many older bird field guides show the range of the wild turkey as sparsely covering the southeastern U.S. in narrow bands from Arkansas up to southern New York and then from Florida to the Carolinas. Many states have been successful with reintroduction programs that have increased the population and range to cover most of the eastern part of our country, where the habitat is good for reproduction.

The turkeys prefer to forage on the ground and eat grains, seeds, acorns and small berries on shrubs. Even though they prefer plant matter, they are omnivores and will consume spiders, snails, insects, frogs, lizards, snakes and salamanders when they’re available.

The female builds the nest against a large tree, under a shrub or in tall grasses, usually beginning in April. She lays 10 to 15 eggs in a shallow depression on the ground that is lined with dried leaves and grasses. The female incubates the eggs; the average clutch is 11 eggs. Some nests have been seen with 20 eggs, but that may happen when a female lays eggs in the established nest of a different turkey. If a nest is destroyed, turkeys will readily re-nest. That might be why my late husband, Roy, and I saw a hen with 10 small youngsters in a field southwest of Jacksonport in mid-September one year.

Young turkeys can fly by their 10th day and can roost in trees by the second week of life. The adult male is 48 inches tall, and a female is about 36 inches. You can easily tell the adult males by the long beard that hangs in front of their breast. Usually, the longer the beard, the older the turkey because it is not molted as the feathers are.

Wisconsin’s wild-turkey population increased by 32 percent per year from 1980 to 2002. Spring and fall hunts were re-established with great success. Years ago a friend gave us a frozen, plucked wild turkey that was harvested in far southwestern Wisconsin. It took three days for it to thaw in our extra refrigerator.

When I prepared it for roasting, I noticed the breast was shaped like an A-frame roof – not round and plump, like that of a farm-raised bird. Before baking the bird, I sprinkled seasonings on it, but they all fell off into the pan. Then I decided to begin roasting it, and after an hour, I slid the pan out of the oven, sprayed the breast with cooking oil and then sprinkled on the seasonings. They stuck in place! The flavor of the meat was the best turkey we ever tasted.

There seem to be so many wild turkeys in Door County now. Let’s hope the spring hunting season will be productive in lowering the numbers so that the rest can survive on the land for another year, and we can keep them off the bird feeders.