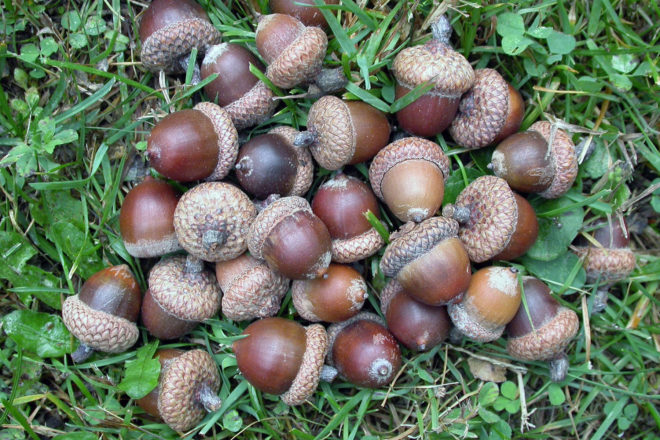 A mound of acorns rests under the northern red oak that produced them. Photo by Roy Lukes.

Native trees have produced incredible numbers of seeds this summer. My front yard has a large sugar maple, and with each windy day, thousands of maple seeds fall. I can’t remember another recent year when this has happened. It may be that trees are reacting to the last two severe winters and are ensuring their survival by producing thousands of their reproductive instruments: seeds.

It was during a July walk when I noticed beautiful ironwood seeds developing in great numbers, and I photographed them in their early stages because of their unusual shape. A friend noticed them in his neighborhood, too, and sent me a photo asking what they were.

As you traveled the roads of Door County, you may have noticed that the white cedars had a light-brown coating. These are the cones – which also formed in high numbers – that are green initially and then turn brown as they mature. Many birds and animals will make use of this stunning supply of seeds.

Another tree species that has dropped “seeds” is the northern red oak. Some years these trees produce no acorns, but this year there’s a good supply. At least two dozen or more wild creatures make use of the acorns, among nearly 100 species known to do so on our continent. Wood ducks, ruffed grouse, wild turkeys, blue jays, black bears and raccoons use the delectable nuts of oak trees as food. It’s not that acorns are the top-priority food for these and other animals, but this staple is widespread and abundantly available during most years.

Red oak acorns taste quite bitter because of the rather high amount of tannin they contain, but the tannin, being water soluble, can be leached out quite readily. Euell Gibbons, in his book Stalking the Wild Asparagus, refers to the acorn as an “ancient food of man” and tells how to effectively remove tannin from red oak acorns to use them as food.

White oak acorns are not bitter and can be eaten raw when they’re ripe, but you’ll prefer them roasted. A long time ago, when it was customary to allow pigs to find much of their own food in the woods during certain seasons, it was said that “acorns (from white oaks) are a delight to little children as well as pigs.”

We happen to live in a part of Wisconsin where very few white oaks grow; they’re much more common in southern Wisconsin and the prairie states. Our predominant oak is the northern red oak. Farther south and in the western part of the state, both can grow naturally.

Here are some ways you can tell them apart: Red oaks belong to the black oak group, which includes species such as the northern red, scarlet, pin, black and scrub oaks. These trees have sharp-pointed winter buds, and the leaves have more or less pointed lobes with bristle tips.

The leaves are nearly as smooth below as above. This tree’s bark is usually quite dark. The acorns ripen in two years, so some small acorns remain on the trees during the winter.

White oaks belong to the white oak group, which contains species such as the white, bur and chestnut oaks. Their leaves, which have rounded lobes without bristle tips, are rather dull and nonreflective, especially on their undersides.

A northern red oak acorn tends to bulge near the tip and has a flat, saucer-like cup at its base. White acorns are a little shorter, oblong and are borne directly on the twig in a bowl-like cup covered with warty scales. Bur oak acorns can be larger than white oak acorns and have a fringed cap covering the lower half of the nut.

It’s said that an oak may not begin producing acorns until it’s 40 to 50 years old and will not reach maturity until it’s about 100 years old. Given good growing conditions, it can live for 300 or more years.

I think of the possibility of one of the acorns that’s now on the ground in my woods germinating next spring and, hopefully, during the next 100 years, growing into an imposing landmark of an oak, producing thousands of acorns, feeding many wild creatures and planting other oaks at Houby Hill – the name for our wooded home site that my late husband, Roy, liked best.