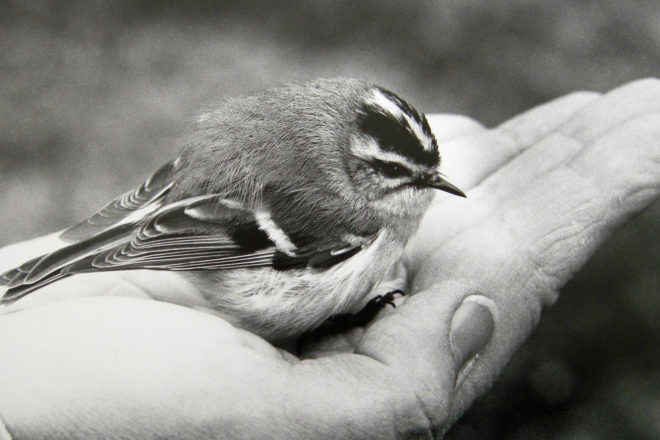 A golden-crowned kinglet rests in Charlotte’s hand, making it apparent how small it is. Photo by Roy Lukes.

I was teaching a class at Björklunden in late September and took my students to several parks and preserves to study mushrooms and other nonflowering plants. There were some birders in the group, and we heard the high-pitched calls of golden-crowned kinglets at Toft Point. I am glad that I now wear hearing aids because I certainly would not have heard these tiny birds without them.

Kinglets are the second-smallest bird in our area, next to the ruby-throated hummingbird. They flit about in trees, finding food on the branches and leaves.

The golden-crowned kinglet has two broods per summer, usually in spruce trees or other conifers. They nest throughout most of southern Canada, northern Minnesota, Wisconsin and Michigan, and they live year-round in the northern Midwest, much of New England and the mountains of western America.

Ruby-crowned kinglets also prefer conifer forests for their nests. They have only one brood, and both species can have six to 11 eggs in a clutch. The female ruby-crowned does all the nest building and incubating, and once the young are hatched, the male helps feed them.

Golden-crowned kinglets are sometimes seen or heard in Door County during the Christmas bird counts, but ruby-crowned are mainly observed here during the spring and fall migration periods.

I remember the year when my late husband, Roy, and I were married, 50 years ago, when we heard an unusual bird song near the Lower Range Light in The Ridges Sanctuary. Roy took his four-speed tape recorder and microphone with parabolic reflector to the site to record the intricate song. The bird seemed to hide in the evergreen trees while vocalizing.

When Roy played back the sound he’d recorded, the singer came out to investigate. It was a male ruby-crowned kinglet, and this was in early June. We never expected it to be that species, thinking they had all migrated to the north by then.

These amazing golden-crowned kinglets, which weigh less than a quarter of an ounce, must survive temperatures to -30° F. A biology professor at the University of Vermont did a study near his cabin in northern Maine and found that this species must maintain a body temperature of 110° in order to survive the winter.

It can’t be without food for more than one or two hours during its very short winter day of about eight hours. However, by puffing up its feathers, it goes without eating during the 16 hours of darkness and manages to survive. Its tiny body is virtually hidden inside a two-inch-thick ball of insulating feathers. And, the colder the winter day, the more kinglet energy must be expended to keep warm.

Kinglets have tiny, sharp beaks that are perfect for finding insect eggs, plant lice, aphids and small insects in the crevices of conifer bark and on branches. It is easier to see what larger birds eat as we observe them feeding, but you would need a magnifying lens to see what kinglets consume. What makes it even more difficult is that they are constantly on the move.

When seen during the Christmas bird counts, kinglets often travel with chickadees, red-breasted nuthatches and brown creepers in search of food, and they busily forage on the dried stems of thimbleberry shrubs along Lake Michigan. The spruce, pine and cedar forests along the east side of Door County are the best places to find these birds.

One of the most interesting books about how creatures survive the winter is Winter World: The Ingenuity of Animal Survival by Bernd Heinrich. He was able to receive a federal permit to kill a few golden-crowned kinglets in order to study what they eat during the winter.

To his surprise, he learned that the kinglets were eating the live, but frozen caterpillars of Geometrid (ge-o-MET-rid) moths – small larvae known as inchworms. Of the dozens of species of Geometrid moths, the only one the book’s researchers were able to accurately identify was that of the one-spotted variant.

There was one month during the winter of 2007, Jan. 7 – Feb. 4, when we had a male ruby-crowned kinglet in our yard that fed on the marvel meal we supplied daily in a special feeder. This was a rare visitor, and he survived amazingly well until the night of Feb. 4, when the nighttime temperature dropped to -14° F.

Incidents such as this one are why it’s important to feed birds. We know that this winter food is not all they eat, but it does supplant their diets enough to help them survive. Now is a good time to improve your feeders for the winter visitors that may need your help.