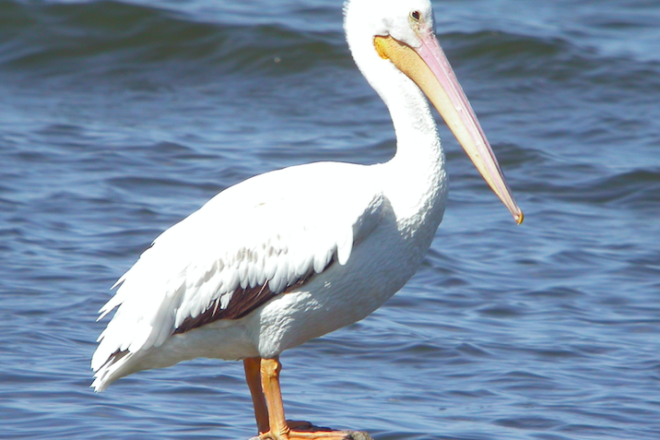 An adult white pelican shows some of its black wing feathers. Photo by Roy Lukes.

Door County has a wonderful variety of bird-watching habitats. It’s always a treat to find a new species in our area, and that happened Oct. 24, 1978, when one white pelican landed near the dock at Gordon Lodge along North Bay. It seems that the quiet bay is a good spot for other unusual migrant stopovers as well: In early November 1978, the same location had nine cattle egrets resting there on their trip south.

American white pelicans’ breeding range has normally been in the far west in the lakes of southern Oregon, northern California and Utah. There’s a flock on the Great Salt Lake that must fly 35 to 100 miles daily to find a meal because the habitat of that salty lake provides no fish.

Early records of birds in Wisconsin indicate that white pelicans were moderately common along the Mississippi River before 1850, but they were never considered a breeding bird of our state. A look at the results of the first Atlas of Breeding Birds in Wisconsin, 1995-2000 reveals only two spots of breeding activity: in the Horicon Marsh and at the lower end of the bay of Green Bay.

A little-known fact is that the name of the infamous prison island located in San Francisco Bay was named for the white pelicans that nested there many years ago. The Spanish refer to this distinguished flier as “Alcatraz.”

My late husband, Roy, and I stayed with friends in Vero Beach, Florida, in the mid-1970s and enjoyed seeing our first white pelicans along the shore of the Indian River. It was fascinating to watch a group of 20 work to capture their aquatic prey. They slowly swam in an arc, moving the fish into shallower water so they could scoop them up into their huge pouches. The flexible, leathery containers under their bills are said to hold about three gallons.

Their breeding range in recent decades has expanded to the Dakotas and southern Canada. Nearly half of all white pelicans in North America now breed in Alberta, Manitoba and Saskatchewan. The western part of Minnesota also has a large nesting population.

Few fish live in the highly alkaline lake where the birds nest. Interestingly, it’s the tiger salamander in that region that’s the primary food base for the pelicans. It’s mostly rough fish and other amphibians –  with very few game fish – that make up the bulk of their diet.

The original colony in the Horicon Marsh produced the first young in 1995. Cat Island in lower Green Bay waters had about 350 nesting pairs in 2004. That was the year when heavy rain flooded many nesting sites in the Horicon Marsh and caused a great number of pelicans to move into Door County. Roy and I saw hundreds of them that summer at Little Sturgeon Bay.

White pelicans have only one brood per year consisting of two, or sometimes three, chicks. Occasionally the first chick that hatches kills the younger chick in a fight for food and survival. Adults catch rough fish, salamanders and crayfish and regurgitate them into the young beaks. A close view of an adult pelican during the breeding period reveals a keel-like growth in the middle of the top of the beak.

These 62-inch-tall birds can soar in large groups, almost effortlessly, on broad, white wings edged in black. Their wingspan is nine to nine and a half feet. You see that when they fly in formation, the front bird flaps its wings, and all the rest flap their wings. Then the lead bird glides, and all the other birds do the same. They are very aerodynamic.

Brown pelicans, native to the Gulf States, are smaller and can dive for their food. The white pelican is much more buoyant and must seine the shallower waters for its meals.

Limericks are one of my favorite forms of poetry. Here’s a fitting one written by Dixon Merritt in 1910:

A wonderful bird is the pelican.

His bill will hold more than his belican.

He can take in his beak

Food enough for a week.

But I’m damned if I see how the helican.