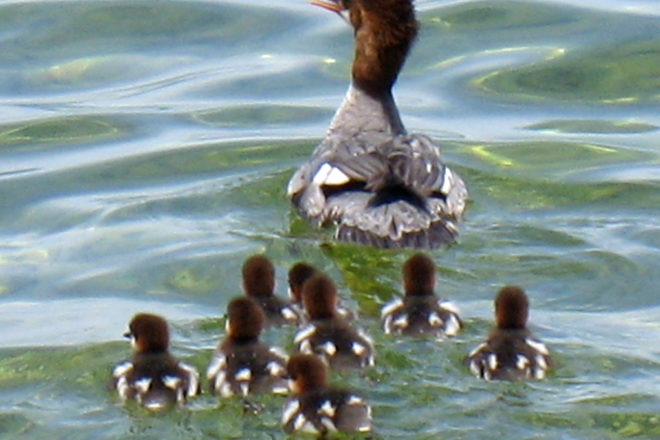 The mother merganser swims away from shore, leading her brood to safe shorelines in the bay. Photo by Chick Peterson, digitally enhanced by Charlotte Lukes.

June is usually the prime time for young birds to be leaving their nests. There are about 85 bird species in North America that use cavities – either holes in trees or human-made nest boxes – in which to lay eggs and rear their young. Woodpeckers, Eastern bluebirds, tree swallows, house wrens and great-crested flycatchers are the more widely recognized songbirds, while four species of ducks – wood ducks, common goldeneyes, hooded mergansers and common mergansers – are also cavity nesters in Door County.

Accurate observations and the study of the life histories of many kinds of birds are not terribly difficult to accomplish, although detailed study does demand much time and patience. Then there are those bird species whose life histories, especially their nesting habits, are not well documented simply because of the birds’ secrecy or their difficult-to-reach nesting locations.

One of Northern Door’s best bird observers for many years has been Sue (Mrs. Charles L.) Peterson of Ephraim. She has led bird hikes, helped with Christmas bird counts and Door County seasonal bird reports, and was involved in studying and documenting breeding bird species over a five-year period for the Atlas of the Breeding Birds of Wisconsin.

An extremely valuable and timely observation was made this past Father’s Day, June 21, by Sue Peterson and her husband, Chick, as they sat leisurely on their west- and north-facing deck.

For two to three weeks prior to that date, they had been noticing a hen duck flying to and from a cavity high in a nearby sugar maple tree, the cavity being about 55 feet above the sloping ground below. Their sightings of the duck were always fleeting, but they finally thought that it was one of the mergansers – either a red-breasted or common merganser. The sheer large size of the bird ruled out the smaller hooded merganser, and the color of the bird ruled out the common goldeneye.

It was 10 am on that pleasantly warm Father’s Day, when all of a sudden, they heard a loud crashing and wing-flapping noise, down through the leaves and to the ground. It was the female merganser accompanying the first of her nestlings on its maiden “journey.”

Stunned, the Petersons watched the other ducklings begin falling, all within a minute, to where the others had landed. All the while the young were jumping out of the sugar maple cavity and falling, the female kept up a constant, quiet cackling. All but one of the nine young birds survived the 55-foot drop to the bare ground or grass below. One young bird apparently landed on a rock and was killed instantly, but two actually got into a small nearby pond and were swimming around in circles, immediately causing Sue and Chick to grin with pleasure.

All of a sudden, the eight babies got behind the mother and the tree trunk, within two minutes of reaching the ground. The excitement was all over within five minutes. That’s when the Petersons stood up and realized that the hen was leading her young down the rather steep hill toward Eagle Harbor, around 600 feet away, and that the birds would have to cross the busy Highway 42 before reaching the water. The popular Fyr Bal festival was in progress, and there were many people and much traffic.

Chick and Sue ran to the car, drove to the highway, parked between the Ephraim Historical Foundation building and the road, and watched and waited for about 15 minutes. They felt it was critical to be there in case they’d have to stop traffic to allow the merganser family to safely cross the road, which is about 50 from the water. Prior to that, the female always flew from the tree cavity and toward the bay.

Judy Flottman, owner of the nearby Anderson House Work Bench gift shop, had sensed the excitement and joined the Petersons. All the while the three of them stood and waited, the female merganser continued flying above them in circles, quacking constantly. Because the young birds were not appearing in the open, Chick decided to walk into the nearby woods to look for the babies, while Sue was ready to stop traffic if need be. While Chick was walking and listening, he could hear only the female calling excitedly, circling above his head.

Suddenly, the mother merganser swooped close to the ground and apparently had her babies clearly in sight. Now the young waddled out of the woods, crossed the grass and came onto the blacktopped parking lot of the Ephraim Historical Foundation, about 50 feet from the highway. It was then that the ducklings became aware of the growing crowd of people standing around, and they headed toward the more secluded, low-stone-wall corner of the parking lot.

Soon a stranger came out of the crowd and said, “I can help you. I’ve raised many ducks.” He walked to the young, gently herding them together, and said, “Quick, someone get a cardboard box,” and in a very short while, Judy had fetched one from her gift shop.

Chick and the unknown gentleman caught the eight baby mergansers, put them into the box, and carried it across the highway and down to the shore. Obviously the constantly circling and quacking mother merganser knew exactly where her babies were because the second they were released into the water, she landed very close to the front of them.

Immediately the young joined their mother and began swimming out onto the bay toward Horseshoe Island while all the people who watched the exciting affair began to applaud. The unusual trust in the mother merganser that her babies had – and how marvelously she constantly communicated with her young, highly disciplined family – was very evident.

What a great Father’s Day this turned out to be – but with the father common merganser nowhere in sight because the male mergansers leave the female as soon as the eggs are laid. The female had incubated her clutch of nine eggs for about 28 days, and from 24 to 48 hours after hatching, the babies were coaxed by their mother to jump the perilous distance of 55 feet to the ground. Now the mother would care for her young family.

Even though they will be fully grown by around the end of July, they most likely will not take their first flight until early September, although they’ll be able to hydroplane over the water at considerable speed even without the aid of their wings.

Thanks to the great sensitivity and careful observations of the Petersons, plus the help of other concerned people, not only did this uncommon common merganser story have a happy ending on Father’s Day, but important new data regarding the life history of this unusually fascinating, but little-understood duck has been recorded.