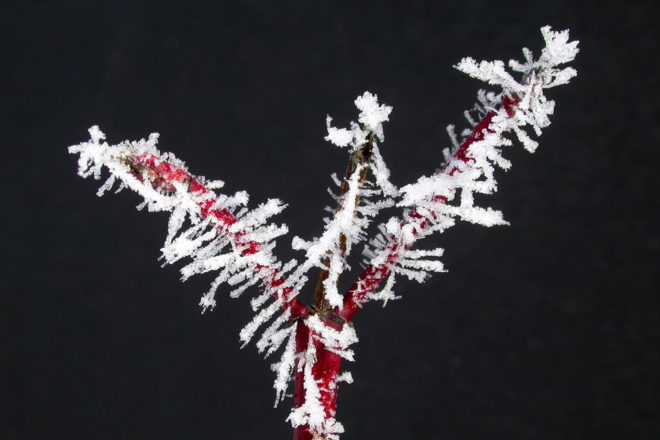 It was on Feb. 21 a year ago when I already had 30 inches of snow for the month and then noted that the next day, I was to put out the rain gauge! It rained all through the night of Feb. 23 into Feb. 24. By the time I brought the gauge in, it held two-thirds of an inch of rain, which changed to snow later in the day, with wind gusts up to 50 miles per hour.

Winter is not like it used to be. The cold season had months of snow without any rain events invading the preferred skiing and sledding conditions. I never remember chopping and removing so much ice from the driveway as I have this year. It used to be that clearing the last ice left over from melting snow was a job done at the end of March. This is part of the global climate change that’s warming the planet.

The encyclopedia definition of snow is the “solid form of water, which grows while floating, rising or falling in the free air of the atmosphere.” The word “crystal” comes from the Greek word “kryllos,” meaning “frost.” Snow crystals, dainty and brittle, are generally hexagonal in pattern and are grouped by the snow experts into types such as plates, stellars (star-like), columns, needles, spatial dendrites, capped columns and irregular crystals. They come in a wide range of shapes, from simple triangles and hexagons to lacy, fern-like dendrites.

Snow crystals develop rapidly whenever there is a rich supply of moisture in the air. It is common for a snowflake to have 50 or more crystals interlocked with each other. Many years ago I was mesmerized by watching what I called mega-flakes drifting down during a two-day lake-effect snowfall that brought 30 inches of the lightest and fluffiest snow we’ve ever seen. The flakes almost looked like giant chicken feathers, as a friend called them, falling slowly to Earth, and they must have been made up of dozens and dozens of individual snow crystals joined together.

One feature of winter that my late husband, Roy, and I truly enjoyed was seeing the delicate hoarfrost that coated every tree, shrub, blade of grass and weed stalk in the countryside on very cold, clear, calm mornings. That occurred last year on Feb. 19 when the dawn temperature was 4 degrees below zero. I stopped to photograph some shrubs along the road with my cell-phone camera, but the result didn’t do the sight justice. One had to see it in real life to appreciate the beauty.

That phenomenon occurs when the invisible water vapor in the atmosphere passes into the ice-crystal phase without going through the liquid phase – a conversion called sublimation.

One of the most elegant displays of plate-like hoarfrost took place north of Baileys Harbor in February of 1977. I was driving to work in Sister Bay on a clear morning with the temperature at 5 degrees below zero. I saw the frost-coated plants and called Roy as soon as I got to my office to tell him to get out there to photograph the amazing sights before the sun rose too high.

This extraordinary form of hoarfrost formed on weeds, barbed-wire fences, shrubs and trees in every direction. All were trimmed with fragile, jagged, nickel- to quarter-sized, flat, pointed discs of frost of incredible beauty. Roy got so carried away with photographing that he nearly froze his fingers as he handled his camera that morning. Once the sun rose and a gentle breeze began to stir, the tinkling “music” of the huge crystals disintegrating and falling to the ground produced another sensation that was never to be forgotten.

When we lived at The Ridges’ range light, our van had to be parked outside during all weather. The day-after-day chore of scraping snow off the car became stale, but one morning Roy noticed that Jack Frost had decorated the inside of the windshield overnight. There, concealed beneath a thin layer of snow, just waiting to be appreciated, were hundreds of delicate ice flowers and dainty white “Tannenbaums” formed in their matchless tracery on the inner surface of the glass.

Even the wispy cirrus clouds that are five to eight miles up during the summer in the middle to low altitudes are composed of ice crystals, and cirrus clouds commonly occur at low elevations in the polar regions. Remember, too, that much of the moderate to heavy rains in our region begin as snow.

Get out early on the next frigid, clear, calm morning to look for these fabulous hoarfrost formations on every plant in the wild. It will be a sublime experience.