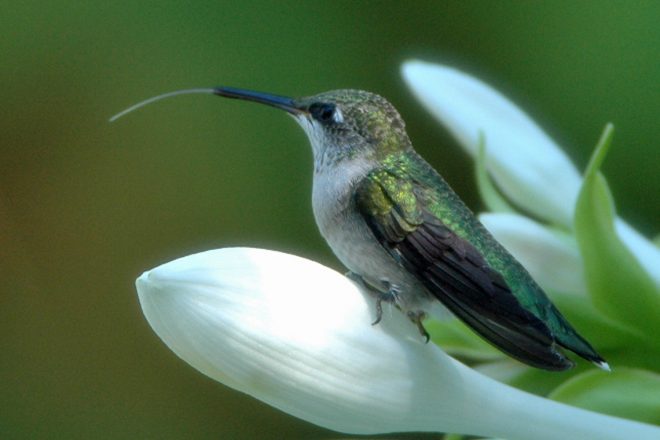 A female ruby-throated hummingbird can extend its tongue nearly as far as the length of its beak. Photo by Roy Lukes.

It is late September as I write this, and there is one female ruby-throated hummingbird still coming to my feeder – the latest in the year when I have seen one here. I reviewed the autumn-season Door County records and found that during the past 12 years, a hummingbird was reported as late as mid-October.

Perhaps the warmer-than-normal weather is helping it to remain here. It is vital to leave your hummingbird feeders up and filled well into the fall. Removing the feeders does not encourage these tiny birds to migrate; in fact, it may make it impossible for the birds to survive. Others migrating from farther north may also visit your feeder to refuel on their southward journey.

Many people like to watch this diminutive bird as it hovers at flowers in the garden or at feeders. It is the only bird that can fly forward and backward, and it seems to move so fast that it is like an insect whizzing by. There are more than 320 species of hummingbirds in the Americas.

Wisconsin Society for Ornithology records note four other species of hummingbirds that have been reported in our state besides the ruby-throated. They are the rufous, Anna’s, Mexican violet-ear and the broad-billed. The most common is the rufous, which has more than 50 records of sightings, mostly in the southern half of the state.

Two Door County residents reported seeing the rufous species in the fall of 2015: one southeast of Egg Harbor and the other in Southern Door. The first date was Sept. 20, and the last was Nov. 15. One male was photographed at a hummingbird feeder. They have orange plumage, and females’ feathers are a mixture of green with orange spots.

My nesting ruby-throated hummingbird weighs only a 10th of an ounce and measures 3.75 inches long. It breeds as far north as the southern quarter of Canada, east of the Rocky Mountains to the Atlantic Coast, and down to central Florida and the Gulf Coast, and it can be found as far west as the Eastern Plains states. In fact, this is the only species of hummingbird that nests in eastern North America, and it has the largest breeding area of any of the 16 species known to breed in this country.

The male arrives first in the spring to set up its territory and is the first in the fall to begin its migration south to Central America. Courtship is brief, and the female does all the nest-building, incubating and caring for the young. Male ruby-throats tend to mate with several other females and take no part in family matters.

The pendulum arc flight pattern of the male may be a way to attract the female into breeding. It is also thought that this flight pattern is used as a defensive tactic to protect its feeding grounds.

The rufous hummingbird is about three inches long and breeds farther north than any other hummingbird species. It also has the longest migration route of these tiny marvels, going as far as 3,900 miles from southern Alaska to south-central Mexico. Rufous hummingbirds are sometimes referred to as “winter hummingbirds.”

They have survived air temperatures of -9 F and wind chills as low as -36 F. They use a clockwise migration route, traveling north along the West Coast, then heading south in the fall through the Rocky Mountains. It may be the prevailing westerly winds that blow them into our state during their fall migration.

These high-country birds glean insects and caterpillars from the needles of pine trees and can find food such as insect eggs on the bark of trees and shrubs in their territory during the winter. They can also feed at sapsucker holes in trees, where many insects are attracted to the sticky substance, and hummingbirds are able to steal small insects from spider webs.

The rufous has been recorded in every state except Hawaii. A British Columbia bird bander captured one in his nets and recorded the number on the bird’s leg band. It was later learned that this bird was eight years, 11 months old – the oldest known for this species.

We are fortunate to have the spectacular ruby-throated hummingbird as our summer resident and nester. It is so important to provide some good nectar-producing, tubular flowers in your garden and to have fresh, sweet water in feeders for these special birds.

Here’s a riddle: Why do hummingbirds hum? They don’t know the words!