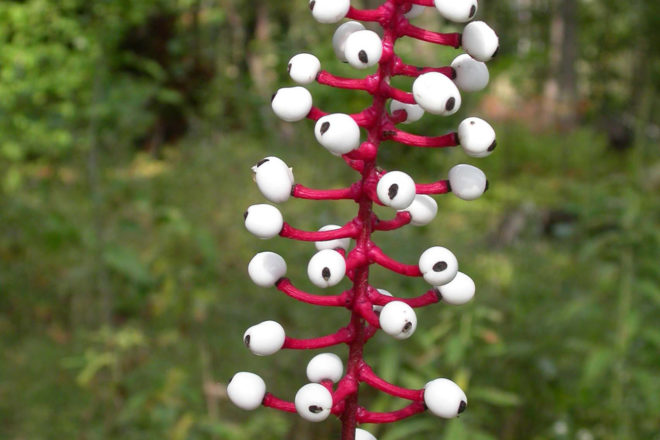 The fall colors of deciduous trees attract the attention of many people. Some years the brilliant reds, oranges and yellows, of sugar maples especially, are spectacular when mixed with the remaining green leaves or the greens of nearby conifers. A few environmentally stressed trees can start changing color by Labor Day, but the peak of the autumn show often doesn’t occur until mid- to late October.

There are other more subtle color changes that take place in the smaller plants, vines and shrubs. Many will produce colorful fruits or berries. The brilliant red fruits of Jack-in-the-pulpit can hide from sight when covered by the large leaves of the plant. Each of the spikes of red fruit arose from a pair of three-lobed leaves, characteristic of the female plants. Plants that didn’t produce fruits this year were all males and each had only one three-parted leaf. Included in the patch were more than a dozen small leaves each looking from a distance surprisingly like poison ivy plants.

It interested me that ring-necked pheasants, turkeys and wood thrushes eat both the leaves and the red fruits of the Jack-in-the-pulpits. Both the leaves and roots stalks, and for all I know, also the red fruits, are rich in calcium oxalate crystals. When nibbled by a person, these sharp pointed crystals lodge in the mucous membranes of the mouth and throat, producing an incredibly intense burning sensation. Chances are the wild creatures known to eat parts of this beautiful plant are totally immune to its disagreeable properties.

Other seed-producing plants with eye-catching fruits are blue-bead lily (Clintonia borealis) and wintergreen. The change in leaf color of the blue-bead lily always catches our eye at this season and invariably proves to us that large patches of them existed in the woods this past summer, and too often overlooked. Now, their bright yellow-green leaves and deep blue fruits shout for attention.

I was pleased, during a recent hike in a boreal forest, to see so many wintergreen berries (more than one found its way to my mouth!). If you were to travel throughout the north central and northeastern parts of the United States, and likewise around southeastern Canada, you might come up with quite a number of plants all claiming the title “wintergreen.”

When I say wintergreen, I mean Gaultheria procumbens. Gray’s Manual of Botany calls it aromatic wintergreen. To make for some confusion, this plant is not even in the wintergreen family but the heath family. This lip-smacking plant has taken on a host of names from various parts of the country through the years, names such as teaberry, checkerberry, mountain tea, deer berry, spiceberry, chinks, Ivry leaves and ground holly.

The pungent fragrance of wintergreen is due to its active ingredient, methyl salicylate. Most often this substance is produced synthetically today and sold as oil of wintergreen.

The fruit of the highbush cranberry resembles the real cranberry in that it is red, oval and very tart. Other than that, they are not even remotely related, the cranberry being in the heath family.

The fruit of the highbush cranberry is not actually a berry but rather a drupe, like a cherry, and has a stone rather than a seed, or seeds. Can you imagine calling the plant the highbush crandrupe? Neither can I! The drupes are flat, hard and light yellow in color, and have to be removed from the fruit when making jelly.

If you own some of these shrubs and the birds have found them, you will notice that the ground beneath them will be liberally speckled with the red flesh of the fruit. The birds are interested in the seeds, not the flesh. A long hedge of highbush cranberries is a thing of beauty because the fruits stay on the plants for much of the winter.

The scientific name for the highbush cranberry, Viburnum trilobum (vi-BUR-num try-LOW-bum), reflects the three- to five-inch leaves, which are three-lobed above the middle, resembling a maple leaf. The rich deep reds of the foliage in autumn are among the great pluses of this ornamental shrub.

Now we come to one of the most spectacular seed remains of any native wildflower in eastern Wisconsin, the doll’s eyes or white baneberry. Not many people hiking with us in the spring woods know the blossom of this beautiful flower. Few wildflower photographers are attracted to the plant’s somewhat small egg-shaped raceme (ra-SEEM) of fuzzy appearing, tightly grouped tiny white flowers. Shortly after the cluster of flowers has reached its peak of development, the petal-like sepals fall to the ground leaving behind mostly the stamens and stigmas.

The small green berries slowly form on somewhat thickened stalks called pedicels (PED-i-cells). Finally by late summer and even into early October, each oval berry, about the size of a pea, has turned to a delicate white with a dark purple to black spot on the end. The bold spot formed where the stigma was attached.

Adding to the attractiveness of the spike of berries are the brilliant rich pinkish-red pedicels, each supporting one berry and  fastened to an upright pink peduncle (PEA-dunk-ul). Because the plant may grow as tall as three feet, it strikes a very imposing picture against the more earthy greens and browns of the fall woods.

The Spikenard is a four-foot-tall native plant that reaches its peak of perfection in September. The plant usually is restricted to rich woods and shaded tree-lined roadsides. There is one big bush along the road near our house, but last year during a Björklunden class I was team teaching, we found many on a trail at The Rushes near the southwest corner of Kangaroo Lake.

Some scientific names of plants are as beautiful as the plants themselves. Spikenard’s name is Aralia racemosa (a-RAY-lee-a ray-se-MO-sa), a downright, gorgeous, smooth-sounding name that’s so easy to learn. Aralia is also the genus to which the very common wild sarsaparilla belongs.

The last colorful fruit that can be seen well into late fall is the winterberry, also called Christmas berry, fever bush, coralberry, Michigan holly, northern holly, deciduous holly and swamp holly. Roy came to know the winterberry in 1964, the first year he worked at The Ridges. It seems to like to grow in damp areas and wetlands. We encountered the largest stands of these spectacular plants along roads running through swamps near Shawano Lake. Each autumn we would drive the scenic back roads to Wausau on our way to the Birds in Art annual exhibit in the Leigh Yawkey Woodson Art Museum on the east edge the city. There are many wet woodlands with northern holly flourishing in that region.

Native plants in your area can, through your study and learning, become regular friends afield during all seasons of the year. In fact, just the sight of a lush northern holly shrub adorned with hundreds of eye-catching red berries is my October delight.