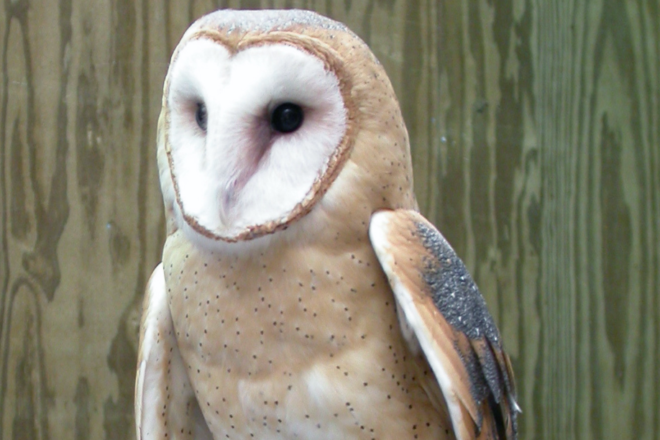 The Christmas bird counts that were conducted on Dec. 14 in the Sturgeon Bay circle and Dec. 15 in the Brussels circle found some owls. The two species that can be found in Door County all year are the great horned owl and the barred owl, and Eastern screech owls have been showing up on more counts during the past 20 years.

Those not familiar with owls can be confused when hearing about the barred and barn varieties because the names sound similar. The barred owl lives here all year in fairly good numbers but prefers to reside in the swamps and in woods close to wetlands. Being mostly nocturnal, they’re not seen during daylight hours unless they’re suffering food shortages, especially during the nesting season.

Barred owls can sit for a long time in one place, conserving energy and just waiting for their food to appear, and they have the ability to turn their head from side to side, up to an arc of 270 degrees, while the body remains perfectly still.

Most owls have tremendous hearing ability. Silent flight feathers with fluffy rear edges help to muffle the sound. The leading edge of their primary wing feathers are toothed, which also reduces the vortex noise as they fly.

The barred owl is often called the hoot owl. Its call says, “Who cooks for you; who cooks for YOU-all?” The last note usually has a downward tone, with a delicate, tremulous character.

Barred owls can also utter shrieks and various other noises. I remember an early spring evening 40 years ago when my late husband, Roy, and I were standing in the meadow east of the range light, waiting for the woodcock to do its nightly courtship flight in April. A startling squawk from a barred owl nearby surprised us, and I said it sounded like someone had “goosed” the owl.

Mating in our area occurs in late February to early March, with two or three eggs laid in the nest, usually in a hollowed, dead tree. Incubation takes 28 days, and the young will be off the nest in about 42 days. They usually stay out on large tree branches near the nest, and the first flight attempts start when they’re 12 to 15 weeks old. By late September, the owlets will have grown their full flight plumage and will look just like the adults by December.

Barred owls have smaller and weaker feet than owls of similar size; however, considering their prey, their talons seem to be perfectly adequate. Their diet includes mice; large insects; chipmunks; red, gray and flying squirrels; small rabbits; crayfish; small fish; and birds up to the size of a flicker.

Barn owls are worldwide in distribution and are known to breed in most of America, but rarely in the far northern areas. In the first Wisconsin Breeding Bird Atlas work, they were found to nest in only four counties, and because of their endangered situation, exact locations were never publicized. This species is in decline throughout the world due to loss of habitat. They tend to rest in hidden areas during the day and hunt at night, flying silently over meadows and open areas. Their numbers are more common in the southern part of the U.S.

Barn owls have a distinctive, heart-shaped facial pattern of whitish feathers outlined with light brown, and their dark-brown eyes contrast beautifully with their facial feathers.

They have excellent low-light vision and great hearing abilities. Their call is an eerie, raspy sound very unlike the whoo, whoo, whoo or hoot of the great horned and barred owls. Females tend to be more colorful than the males and are usually a bit larger.

They nest in abandoned farm buildings, silos, church steeples and tree cavities. Early studies show that the barn owl was never found widely in Wisconsin. The first known breeding record was in 1899 in a hollow bur oak in the southern part of the state. Nesting is more common when there’s a high population of meadow voles, also called field mice or meadow mice.

Lewis Wayne Walker, the author of The Book of Owls, realized the great importance of owls in nature and urged that they be protected by law. As a young lad, he spent 96 nights in the bell towers of the First Congregational Church in Flushing, Long Island, New York, where his goal was to study and photograph a nesting pair of barn owls.

One of the revelations of his project amazed the experts: During that period, the adult barn owls took 758 rats and mice to feed to their young! And surely that was only a fraction of their total kill of these creatures.

Learn to appreciate the native owls and their need for good breeding habitat. They live in extreme weather conditions to find food and raise their young. Give a hoot about owls!