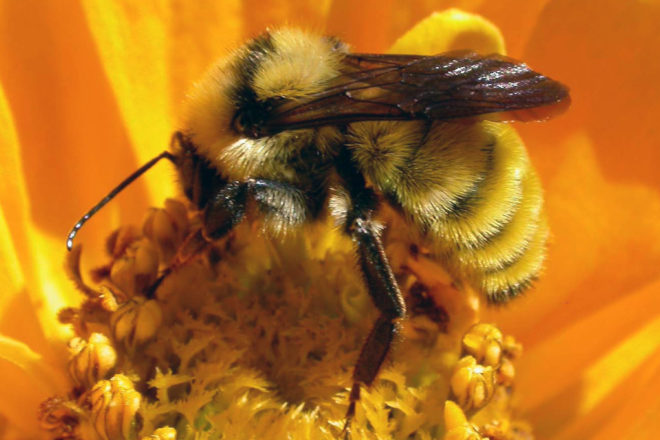 This bumblebee’s body is equally sectioned in narrow black and yellow bands. Photos by Roy Lukes.

Jim Lundstrom’s story in the Sept. 14 issue of the Peninsula Pulse discussed the decline of aerial insectivores, particularly the chimney swifts. Some of our modern agricultural techniques are doing a lot to decrease the insects that most birds need to survive.

One major problem affecting bees is the neonicotinoids used in making farming easier for managing insects. They are related to nicotine. In fact the name means “new nicotine-like insecticide.” Seeds of a number of crops are coated with these chemicals before planting and they are systemic, moving into all parts of the plant. Other similar chemicals are applied to the soil in some agricultural fields.

Nectar and pollen have small amounts enough to affect the growth of bumblebees and studies showed an 85 percent reduction in producing new queens in the colonies. Queens exposed to trace amounts were 25 percent less able to lay eggs. In studies done it was found that after several years of use of these neonicotinoids the chemical was even found in waterways near the treated fields because it is so water-soluble.

A study done on native wild bees collected in wheat fields and grasslands during a two-year period (2013-14) in northeastern Colorado was done to measure 122 different pesticides and 14 pesticide breakdown products. Nineteen pesticides were detected in the 54 composite samples of bees collected. 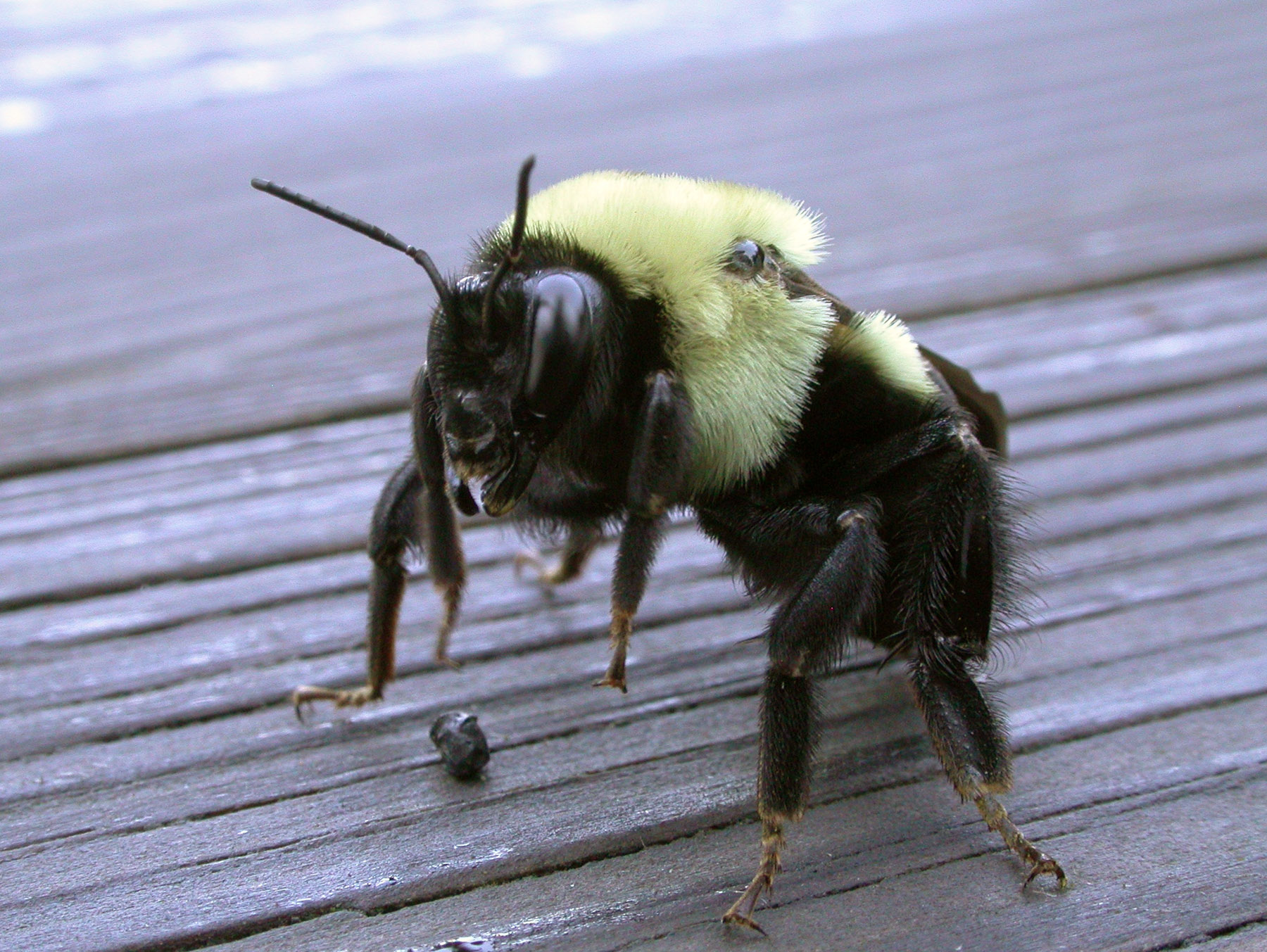 Here is a defensive posture of a bumblebee. It also shows how hairy the body and legs are.

Rapeseed that is planted in vast acreages of the Canadian prairies is one of the coated varieties. That is the plant which is used to produce canola oil. People who care about ingesting the good fats, like olive oil and canola oil, due to the monounsaturated nature of them, may wonder how these harmful chemicals could affect their bodies over time.

I’ve lived here for 46 years and remember driving at night in the summer and seeing so many moths and other flying insects hitting the windshield of our car. Then the gypsy moth invaded the Midwest and an all-out attempt to rid the environment of these non-native creatures caused aerial spraying of insecticides. It was after those days that we saw fewer flying moths and insects in general.

This summer was dryer and warmer than last year and the flowers in my front yard had many butterflies and bees gathering pollen and nectar. The bumblebees were more numerous than the butterflies. I’ve planted native wildflowers that do not get any insecticides applied to them or to the soil.

As autumn approaches and other bees are unable to put up with the lower temperatures, the bumblebees can still collect pollen and nectar. These primarily yellow and black insects have long insulating hairs on their legs and bodies, enabling them to forage in the cool early morning, early evening and especially into the late fall season until the very last flowers are blossoming.

Sizes and color combinations indicate that there are more than one species at my gardens and obviously also different age groups. Those of later summer are somewhat larger than those of May and early June. At least 13 different species of “Bombus” live in Wisconsin. One of the more common species, Bombus fervidus, the great northern bumblebee, is also among the largest.

The sighting of the first bumblebee in spring is always a pleasant event in my daily recordkeeping. It is usually one of the queens that, perhaps due to her larger size and other factors, are capable of surviving the winter; and it is generally underground. She spends considerable time consuming the first nectar to be found on the early flowers, and also searching for a suitable nesting site, possibly an abandoned mouse nest.

Nectar and pollen are gathered and mixed into bean-sized lumps of what is known as bee bread. A few eggs, usually four to eight, are laid upon the mass, and a depression called a honey pot is made of wax and filled with nectar. Now the queen actually broods over her eggs like a mother hen. The eggs are vulnerable to cold temperatures and must be kept warm. It is the energy derived from the honey pot that gives the queen strength to remain on the clutch of eggs. 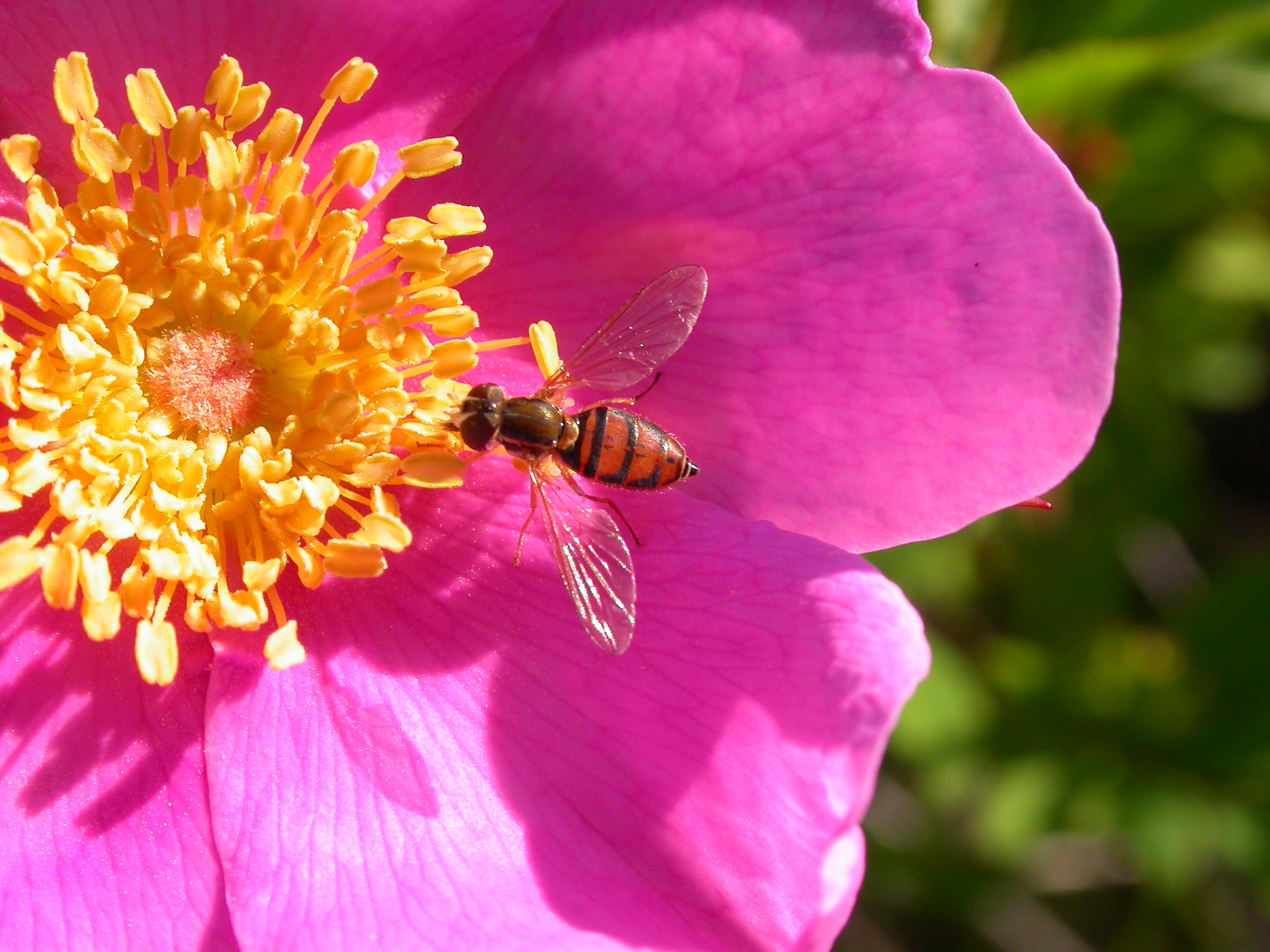 A wild bee collects nectar at a wild rose blossom.

Soon the eggs hatch into grubs, burrow into the bread, eat, grow and eventually spin cocoons. All this time the queen has been attending them, occasionally feeding them some nectar and keeping them warm. They change into pupae and finally emerge as true female bumblebees, smaller than the mother, referred to as daughters or workers. They will faithfully care for the growing family by collecting food and waiting on the queen. About three weeks elapse from the time an egg is laid until a worker bee emerges from its cocoon.

All the queen’s eggs laid during spring and into mid-summer hatch into workers. Their tongues are long enough to collect nectar from red clover and many other flowers.

Finally in late summer some new queens along with more workers and drones (males) are hatched. These workers are larger now than in early summer and will actually mate with some of the drones and lay eggs, which will eventually become more drones.

Some of the drones will mate with the new queens, the only individuals from the entire colony that will survive the winter. All the rest of the other workers, drones and the old queen will die. The colony at its peak may have numbered in the several hundred or as many as around 2,000. The largest colonies persist where there is a dependable ongoing source of nectar.

Don’t ever be fooled that a bumblebee can’t sting. In fact, unlike a honey bee (not native to America) that can sting only once because its stinger is pulled from its body in the process, a bumblebee can sting repeatedly.

Indeed a bumblebee has the necessary requirements for sustained flight: wings that have a heavy front edge and a billowing surface, rapidity of stroke, a certain amount of weight and a proper direction of wing stroke. Pay deep respect for the first big queens of late April or early May for upon them rests the successful pollination of many of our wild and garden flowers as well as vegetable flowers.

You can be assured that, come spring, the large queens will be the earliest afield in search of the first available nectar and pollen for the bee bread. We could very well pause at our work and offer a word of thanks to the “bumbees” (as the Scots call them), one of the greatest assets to mankind. Harvest your garden crops with a tip of the hat to the beautiful bumblebees.