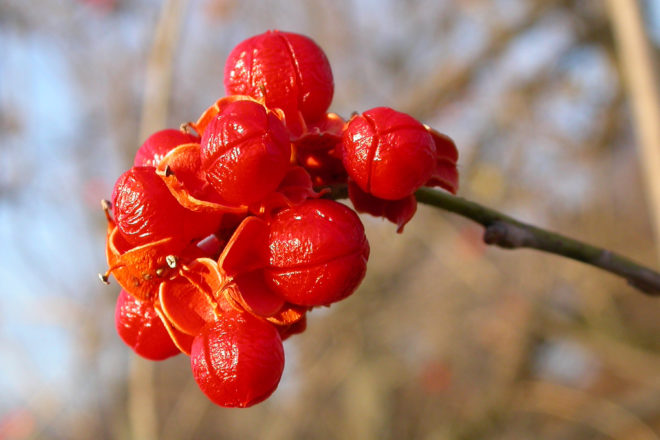 This close-up view of the bittersweet fruit shows the three-parted berry and husk. Photo by Roy Lukes.

The drab landscape colors – now that strong winds have blown most of the colorful leaves off the deciduous trees – might have a few bright spots where bittersweet berries remain on clinging vines.

There are two species of these colorful, fruiting vines that grow along fencerows, woodland edges and river banks. American or climbing bittersweet, native to about 40 percent of the northeastern U.S., is not as common as it once was.

American bittersweet has the scientific name of Celastrus scandens (se-LAS-trus SKAN-dens). “Celastrus” is an ancient Greek name for an evergreen shrub, and “scandens” refers to climbing. Celastrin – found in the root and bark – is toxic to humans, as is the fruit.

The genus Celastrus is in the Staff-Tree family, which I had never heard of until doing research for this story. You may be familiar with another member of this small family, however: the very colorful fall shrub called burning bush, Euonymus atropurpureus.

For many years, flower shop owners picked enormous quantities of bittersweet plants from the wild each fall to sell as decorative centerpieces, so it became rare in many states and had to be protected by law. Unfortunately, the laws were difficult to enforce and did little to prevent the plants from being removed from the wild, so it’s rare to find this native vine today.

The vine has no tendrils, and it reaches heights of up to 40 feet by encircling a tree so tightly and quickly that it may even strangle the trunk. Often the bark of the host tree just grows around the vine, gradually embedding it. The vine requires full sun, and that’s why it climbs rapidly to reach a spot above the shade of the tree’s branches.

There’s a different bittersweet that can be found in garden centers and flower shops. This one, called Oriental bittersweet, Celastrus orbiculata, (or-bik-you-LAY-ta), is nonnative, introduced from eastern Asia, and it can escape to the wild and become an aggressive weed. Birds eat the fruit and disperse the seeds in their droppings.

It’s easy to tell the difference when examining the flowers and fruits of each variety. Those on American bittersweet are terminal fruit: produced at the ends of the branches. The Oriental species has flowers and fruits growing along the stems. Each little lateral spike on Oriental bittersweet is about four to six inches long and contains roughly 15 individual berries. It’s considerably more colorful and more laden with fruit than our native species.

The fruits of American native bittersweet have outer husks that are orange, with red inner fruits. The red Oriental berries have yellow husks. Both are three-parted in the forms of the husks and the berries.

Many professional botanists warn against planting any and all nonnative species such as Oriental bittersweet, simply because there have been so many occasions when these plants have escaped to the wild and become terrible nuisances – referred to today as invasives.

If you can find American bittersweet in garden catalogs and wish to plant it, know that this species is dioecious (dy-EE-shus), meaning that male and female flowers form on separate plants. You will need at least one of each to ensure fertilization of the pistillate or female flowers – the plants that bear the fruit.

The term “bittersweet” actually came from the European deadly nightshade. When the root is chewed, the sensation is bitter first, then sweet. That may have been a warning because the plant – especially the fruit – is poisonous, and consequently, that’s why it’s frequently called deadly nightshade.

Birds such as waxwings, robins, pine grosbeaks and even mockingbirds easily find the vibrant fruit, especially in winter, and they can safely consume it. Because it contains the toxin eyonymin, however, it’s very harmful to people. The hard-coated, indigestible seeds pass through the birds’ digestive system without alteration and may be deposited in soil that’s possibly many miles from where the fruits were eaten.

It’s better to introduce native plants to your yard instead of invasives that can easily spread. There are many choices of flowering perennials and shrubs that provide beauty during the summer, along with fruits and seeds for birds come autumn.