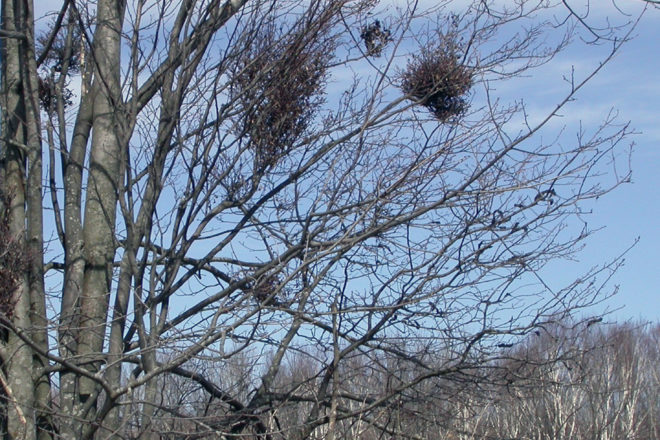 The brooming on serviceberry trees grows mainly on the ends of the branches as clusters of leaves. Photo by Roy Lukes.

This is the season when writing about nature becomes a bit difficult because no flowers are blossoming, no insects are flitting about and the colorful nesting birds have fled south. Some animal species have gone into hibernation or a modified winter residence underground. It’s the quiet season.

The bleak winter landscape of leafless shrubs and trees, however, makes noticing the unusual growths on the native serviceberry trees much easier. These trees grow along roadsides in many parts of Door County. In the spring, they bloom with showy, white flowers, often before all the hardwood trees are leafed out.

The first nature essay that my late husband, Roy, wrote about the serviceberry tree was in June of 1970. The Allegheny serviceberry (Amelanchier laevis) was always his favorite. Its white flowers, partnered with the bronzy-red leaves, make it a spectacular sight. We often noticed many of them along Highway 57 as we drove south to Jacksonport from Baileys Harbor.

The tasty berries they produce in June are especially attractive to birds. Humans enjoy them, too, but usually the birds get them just before they’re completely ripe. The berries are sweet and very high in vitamin C – even higher than most citrus fruits.

The serviceberry genus, Amelanchier (ah-ma-LANG-kee-er), has been around for a long time: Paleobotanists have aged fossils of its leaves at about 50 million years old. Nurseries sell various species, and being exceptionally hardy, they make outstanding specimen trees: those that people quickly notice.

This lovely, small tree may owe its extreme durability to the fact that it has the heaviest wood that grows outside the tropics and the fifth hardest wood that grows in the U.S. One of these trees planted fairly close to a building will grow outward from it, produce graceful lines and thereby draw the eye away from the boxy house, but the serviceberry, also called the Juneberry, prefers open woods, roadsides and edges.

Some individual trees do not fruit heavily, and others have fruits that are distorted or damaged by fungus diseases. The tree, like the hackberry, is quite prone to “witch’s brooms” or brooming: very thick, abnormal growths of twigs and branches that usually spell death for that specimen.

We learned many years ago that the disease is caused by the fungus Apiosporina (a-pee-o-spor-EYE-na) collinsii (col-LIN-see-eye). Interestingly, its relative Apiosporina morbosa is the culprit that attacks species of cherry trees and causes a common woody growth on the branches called black knot.

Roy sent a sample of serviceberry brooming to a specialist in plant diseases, and it was confirmed to be caused by the A. collinsii fungus. This same fungus can infect seeds of the Chinese elm, Japanese black pine and trident maple to produce dwarf forms that can be trimmed and formed into bonsai trees.

The spores of the A. collinsii fungus are not released until the spring following their formation the previous year. If you find some serviceberry trees on your property with these unusual branches, it’s best to prune the affected branches in the fall, which will contain the disease, then burn the branches. A nursery professional told us that the infection is confined to the branches and does not travel down the trunk.

We also learned that landscape varieties that nurseries introduce and plant, though susceptible, are seldom affected. Our 26 acres of wooded property had more than 320 serviceberry trees on it when we moved here in 1982. They ranged in size from very thin trunks to some that were two to three inches in diameter.

The Ridges Sanctuary had an old red pine with a huge mass of branches 40 feet high on one side of the crown. People used to ask Roy whether it was an eagle’s nest, but it was actually another type of brooming that might have been caused by a fungus, a virus or perhaps an insect attack.

In The Ridges, there were certain spruce trees with brooming that was the result of a parasitic plant called the dwarf mistletoe, Arceuthobium pusillum (ar-coo-THOW-be-um PUE-sill-um), which becomes rooted into the branches of spruces and develops a strong absorption system. Eventually all the nourishment that the tree takes up is directed only to the branches infected by the mistletoe, which eventually kills the tree.

Plant more native trees, and care for them to help our wildlife find food and shelter. Future generations will appreciate them just as much as you will enjoy watching them grow.