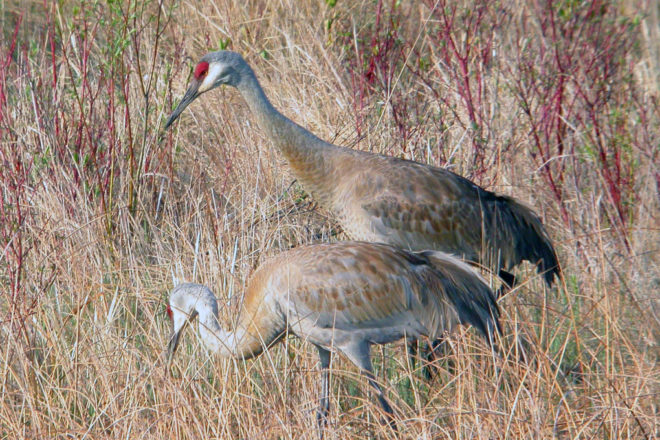 A pair of sandhill cranes explores the marsh for food and perhaps a good nesting site.

My late husband, Roy, and I had always wanted to see the huge, migrating flocks of sandhill cranes that gathered in the spring along Nebraska’s Platte River, and we finally made the journey in March of 1995. The weather was great, with warmer-than-normal temperatures. We observed several hundred thousand cranes and 300,000 snow geese in nearby ponds.

There are six subspecies of sandhill cranes, differentiated by size and weight. The lesser sandhill cranes are the most abundant and the most common in the Plains states and up into central Canada, resting along rivers in Nebraska during their migratory journey and wintering in New Mexico and Texas.

Only three of the subspecies migrate: the lesser, greater and Canadian. Our Wisconsin cranes are the greater subspecies and winter in the Southeast, especially in Florida and southern Georgia. One famous spot where you can see them during migration is the Jasper Pulaski Wildlife Area in north-central Indiana. We visited that preserve in November many years ago and saw more than 20,000 sandhills in a big field.

On March 14 this year, my niece sent a text saying she’d seen three sandhill cranes fly over her in Sturgeon Bay: the first report of this species in Door County for the 2019 season.

Records of spring arrival dates going back to 2002 show that the sandhills returned during the first week of March in eight years and in the second week in seven years. The first crane was seen before March 1 in the mild spring of 2017, but one was not reported until March 23 of 2005.

Weather can have a big effect on the spring migration of most returning birds. The terrible storms and resulting floods in Nebraska this month have made viewing the cranes along the Platte River nearly impossible, and birders have reported fewer cranes in the area compared to 600,000 seen there last year.

I first started birdwatching in 1972, when there were no – or very few – nesting sandhill cranes in Door County. In fact, there are no records of them before 1980. Their numbers have increased greatly since then, to the point that crane counts are run each April. We were assigned a particular area and would walk in before dawn. As the early-morning light brightened the sky, we were to record the calls and flights of the nearby cranes.

Sandhills prefer to nest in wetlands or on grassy, flat areas surrounded by ridges of taller vegetation, where they have more protection. The nest is a low mound of grasses and marsh plants, or just a depression on dry ground. The outside diameter can be three to five feet.

They rub mud over their feathers to blend in with the environment during breeding season. They usually lay two eggs about two days apart; then both the male and female incubate them for 30 to 32 days. The young hatch one day apart and generally leave the nest very soon after both have hatched. Both parents feed them small bits of food, and they begin to feed themselves in the second week. Wing feathers start to develop at 16 days, and they can fly by about 70 days. They stay with the parents for the first year.

The International Crane Foundation, based in Wisconsin, was founded in 1973. That year, a UW-Stevens Point study estimated a total of just 850 sandhill cranes inhabiting the state, in only 31 counties, and primarily in the south and central portions.

During the 19th century, sandhill cranes were abundant and a common summer resident, but wetlands drainage reduced their preferred habitat. By the mid-1930s, there were only an estimated 25 pairs in Wisconsin. By 1973, a few years after Earth Day began, their population had increased and stabilized.

As of the first Breeding Bird Atlas work, 1995 to 2000, cranes were confirmed to be breeding in all but four of Wisconsin’s counties, and their numbers were increasing in neighboring Midwestern states.

As the population increased, farmers complained about them eating newly planted corn seeds. Treating the seeds with Lindane stopped that, but the chemical was toxic and its use was discontinued. Further research developed a new, nontoxic product – anthraquinone – to treat the corn seeds, and it has reduced farmers’ complaints.

The maximum recorded lifespan of a sandhill crane is 18 and a half years. Most live less than half that long, but the larger the bird, generally the longer they can live. Many songbirds live only a year or two.

With whom will you share the land? Give me the noble, wary, exuberant, dancing, lively cranes – symbols of a long, happy life!