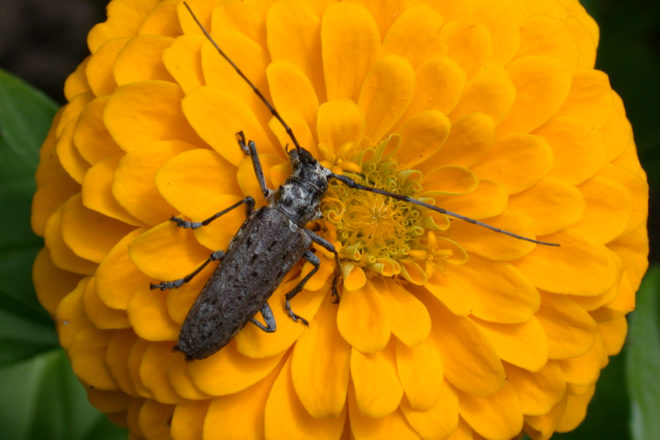 The black pine sawyer beetle is a long-horned borer of pine trees. Photo by Roy Lukes.

More than a million kinds of insects have been identified in the world – more than all other animals combined. These creatures’ vast array includes some of the more common types, such as beetles, butterflies, moths, bugs, flies, bees, wasps and dragonflies.

Anyone who refers to all insects as bugs will be surprised to learn that, of the great number of insects in the world, there are only about 40,000 species of true bugs, 4,500 of which are found in the United States. In other words, only about one of every 25 insects is actually a bug.

True bugs have simple development, meaning that their eggs hatch into nymphs and look like very tiny adults. At first they are earthbound, but eventually, after growing and molting several times, they develop wings and have the power of flight.

Another feature of bugs is that most have piercing and sucking mouthparts. Both adults and nymphs do damage by drawing sap from plants and causing them to wilt. Peas, beans and fruit on which they have fed, for example, become pimpled or malformed.

We used to grow raspberries and had invasions of stink bugs that damaged the fruit. These detrimental insects give off a strong odor – hence their name – on edible parts of the plants on which they have crawled. Those we’ve seen are about a half-inch long, bright green, with narrow yellow, orange or reddish edges to their shield-shaped bodies.

As with other true bugs, these stink bugs have antennae that are five-parted, with the three outermost segments clearly marked with black. Their normal habitat includes agricultural fields, orchards and gardens, where they obtain juices from the foliage, flowers and fruit of a wide variety of plants.

If you’ve noticed small, bubbly masses in the leaf axils of some green plants and wonder what causes that, pull apart the mass, and you may find a tiny green or brown insect inside this protective “home.” That is a spittlebug, and it was given the name because the bubbles look like spittle. They belong to the large group of leafhoppers, cicadas, aphids and scale insects.

A spittlebug is nearly always fastened to a plant with its head downward. It secretes foamy bubbles from several parts of its body, and the bubbles mix with air to produce long-lasting bubbles. It is thought that the spittlebug creates its own air-conditioned foam home – a microclimate that allows it to hide from predators.

Beetles make up the largest single order in the entire animal kingdom, which includes humans and all other mammals, and it is the most widely distributed order of all insects. It has been estimated that there are about 290,000 beetle species in the world, with 28,600 found in North America.

Roughly one out of every five living things on Earth, including plants and animals, is a beetle. More than 32% of all species of animals and more than 40% of all insects are beetles. They can vary greatly in size, from the seven-inch rhinoceros beetle to those so small that they are barely visible to the naked eye.

Unfortunately, quite a few beetle species in our country aren’t even referred to as beetles. Take, for example, the lady bug, which is actually a beetle; or the lightning bug, or firefly, which is neither a bug nor a fly, but also a true beetle.

Beetles belong to the large order Coleoptera (ko-lee-OP-ter-a), meaning “sheath wing.” Their forewings, thorax and head coverings are very hard and often quite leathery. Normally their hind wings, which are used to fly, are folded like a fan when not in use and are safely covered, concealed and protected from injury by their forewings, also known as wing covers or elytra (e-LEE-tra).

Visit a nature center to find good field guides to help you understand and identify the insects you may encounter in your garden or on a hike. Also learn how to control unwanted insect pests in a way that does not harm other creatures because insecticides can kill many beneficial insects along with the harmful ones.