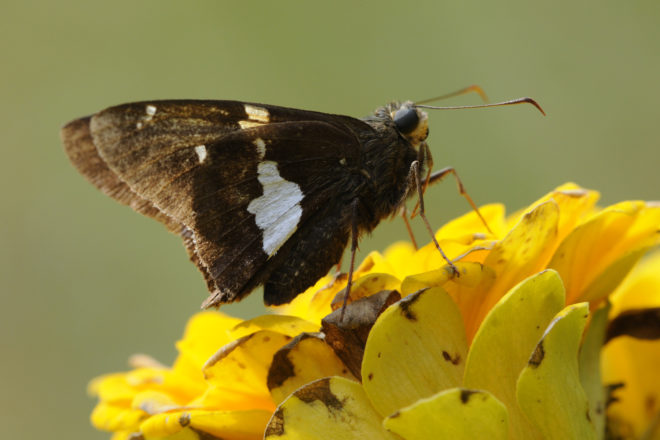 The silver-spotted skipper has antennae that are pointed and bent down. This view shows the large white patch on the underside of its hind wing. Photos by Roy Lukes.

I am enjoying the many great spangled fritillary and monarch butterflies nectaring on the tall swamp milkweed that Roy and I planted many years ago in our butterfly garden. I’ve also noticed small rather plain, dark butterflies that are called skippers.

This group of insects is not as well-known as many of the butterflies. They are much smaller and get their name from their fast skipping flight. Skippers are in the family Hesperiidae (hes-per-EYE-eh-dee). Some 3,500 species are known worldwide and nearly 275 species have been identified in the U.S. The Peterson Field Guide to Eastern Butterflies lists 110 species of skippers. The highest population of skippers lives in the tropics.

Many butterfly books say this is the most difficult of all butterfly families to work with and identify. A typical butterfly, in general, has larger wings in proportion to its more slender body and flies generally at a slower speed, while the average skipper, a small, swift, darting creature, has a thick, bulky body and short triangular wings that are usually moving so rapidly they appear blurred. 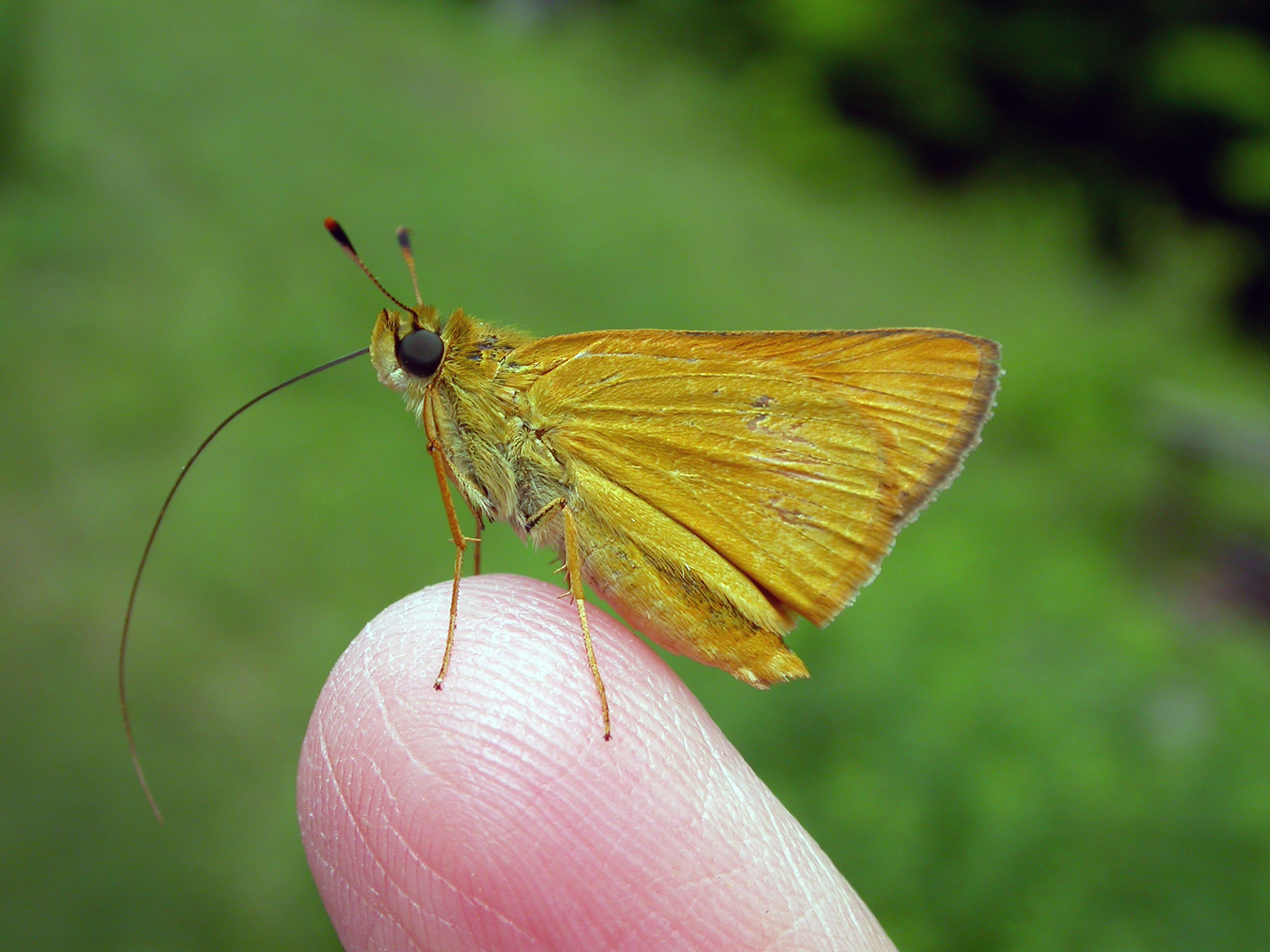 A Delaware skipper sits on the tip of Charlotte’s finger showing its large eye and long proboscis.

It is quite easy to come close to some skippers as they feast on flower nectar, and it is then that you can readily see the upswept position of the forewings, sometimes at a 45-degree angle, while the lower pair is either held parallel to whatever it is clinging to or is pulled fairly close to the body. These swift, erratic fliers require strongly developed thoraxes to accommodate the muscles of flight. The name skipper fits them well. They can really move.

Skippers have another feature that enables them to easily walk over the heads of flowers from which they are sipping nectar. Nearly all species have tiny spurs on the tibiae of the hind feet that allow them to cling securely to the plants.

When seeing them from very close range one can realize that their antennae are different than those of the typical butterfly. Some are club-shaped at the end, and many are also bent or tapered into a hook shape as well. The skipper’s antennae arise relatively farther apart on the head than, for example, a swallowtail’s.

There are about 50 species in Wisconsin. Entomologists in general avoid collecting and working with skippers simply because of the somewhat dull, somber brown, black, orange and tan colors of the group. Consequently, there is much to be learned about this small but challenging family. A book I enjoy using is by Larry Weber, called Butterflies of the North Woods. He has actual photos of the species and indicates their habitats and what months of the summer they are most abundant.

Some of the interesting names include the pepper and salt, roadside, Dun, and Hobomok, which has a bright glossy orange area in the central wing portion. The Peck’s skipper has bright yellow spots on the undersides of its hind wings. Look for the checkered skipper, which has striking upper wing surfaces, around hollyhocks, one of the larval foods of this species. The wingspan of these and most other Wisconsin skippers averages between 1 to 1½ inches.

A common nondescript member of the family in this region is the long dash skipper. It favors fields of weedy flowers, butterfly gardens and sunny openings. Another colorful member of the family that is common in our area is the arctic skipper. The most attractive flowers to the skippers in my butterfly garden are those of the swamp milkweed and the purple coneflower. In fact I can’t think of a better, hardier pair of perennials to introduce to your garden than these beautiful natives. Many species of butterflies are attracted to them. 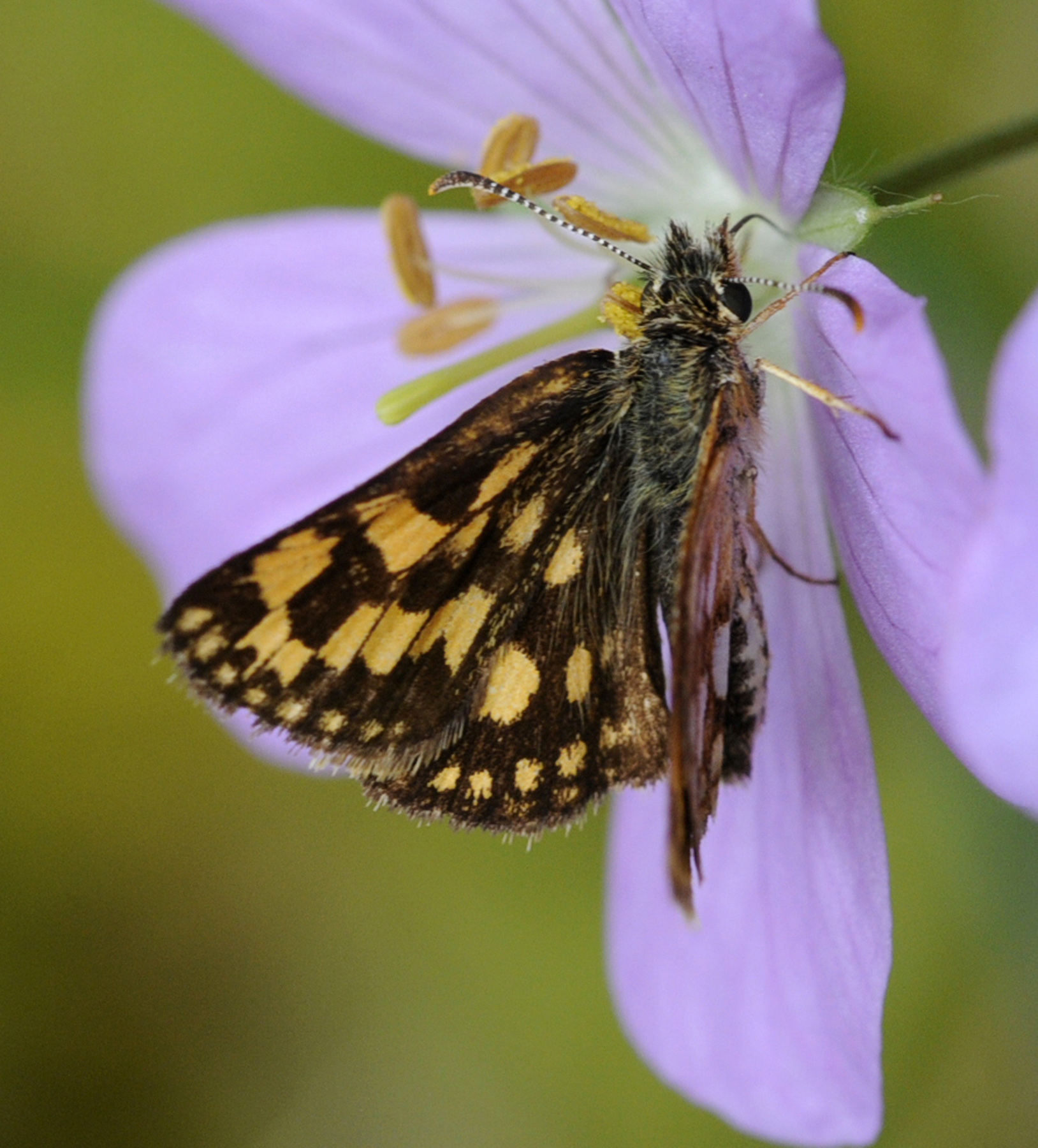 The arctic skipper is one of the more colorful of the species. Notice its black and white lined antennae.

The largest skipper common to Wisconsin is the silver-spotted, having a wingspan of around 1¾ inches. Sprawled across the top surface of each dark brown forewing are uneven orange spots. A very conspicuous white, irregular-edged spot adorns the undersurface of each of the hind wings. What a beauty!

Another excellent book I use, one of the best to appear on the market in a long time, is Butterflies: How to Identify and Attract Them to Your Garden by Marcus Schneck. It is published by Rodale Press, Inc. The things I really like about the book – featuring 250 species of North American butterflies – are the good colored descriptions, caterpillars for most of them, host plants for the larvae, plants to attract butterflies, photographing butterflies, distribution maps, habitat information and important details about their life cycle.

I remember finding a Delaware skipper on the windshield of our car many years ago. Fortunately Roy was home and quickly had his camera in hand. I carefully nudged the skipper to sit on my finger tip and it was content to stay there for a few minutes so Roy could snap several pictures. We had a nice close look at its short antennae, large eyes and very long proboscis.

Plant a butterfly garden with native flowers that many kinds of insects can enjoy. You will be rewarded with daily activity and the beauty of butterflies of several species.

The more we learn about all creatures in nature, including the butterflies and skippers, the better stewards of our great planet we will be. Times are changing. Mother Nature needs all the help we can give her.