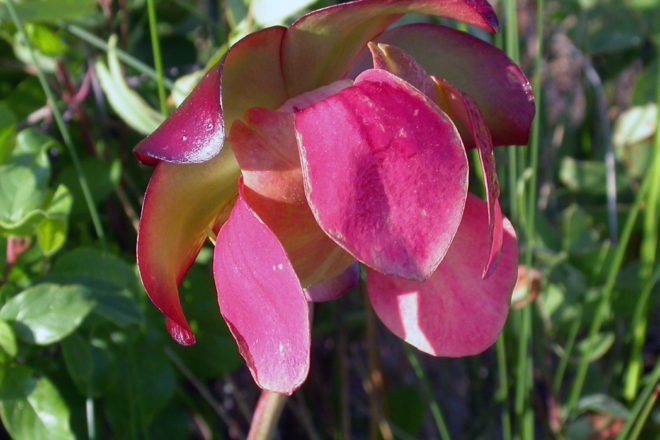 The pitcher-plant flower stalk can be up to two feet tall. Photo by Roy Lukes.

Many of you have heard of the Venus flytrap, but there are some other insect-eating plants growing right here in Door County. We are fortunate to have The Ridges Sanctuary: a place where you can see some of these unusual carnivorous plants.

The most abundant is the northern pitcher plant. The hollow, water-holding, reddish-green leaves do a great job of helping to feed these plants from spring until the snow flies in late autumn.

My first encounter was 47 years ago, when I paused along one of the wooden bridges that crossed the wet swale in The Ridges. The shape and color of the upright, tubular leaves is so distinctive from all other wetland plants.

The wettest parts of acidic sphagnum bogs are the favored habitat, where they can grow by the hundreds on the floating, or quaking, mats of vegetation at the edges of the land-locked bog ponds and small lakes. The Ridges has genuine bog-like areas that are also home to wild cranberries, water horsetail and two other carnivorous plants: bladderwort and round-leaved sundew.

Among the 10 pitcher-plant species that inhabit the U.S., the northern pitcher plant is the only one that grows naturally in Wisconsin and can tolerate a cold climate.

The often-rain-filled leaves of this perennial freeze solid in winter, thaw in the spring, capture insects and other tiny creatures to supply much-needed nitrogen to the plant, and soon give way to new leaves as summer approaches.

The growth of a single plant from seedling to the strikingly handsome flowering form may take as long as six years, and it’s these older and larger plant leaves that are so fascinating. A vertical cross-section of one of the leaves reveals four distinct zones, each having a highly specialized purpose.

Zone one is the “attractive” top section, which – through color, aroma, appealing nectar, and short, spiny, downward-pointing hairs – lures the unsuspecting insect inward to zone two, the “conducting” zone.

Here, directly below the broad, spiny top area are reddish, slippery, waxy, glassy cells, overlapping like shingles on a roof, that prevent the insect from crawling back out. In this zone, insects often lose their footing, fall into the water reservoir and drown.

Some insects, however, reach zone three, the “glandular” zone, which is also smooth and slippery and contains numerous glands whose functions are not well understood. Should the pitcher be without water, zone four, the “detentive” zone, contains long, thin, silky hairs that further prevent insects from crawling out.

Living in the often foul-smelling, soupy liquid within the pitcher are various forms of bacteria, fungi, protozoans, algae and other microscopic organisms. They all aid in the digestion of insects, spiders, mites, isopods and even the occasional small frog, which could become trapped in the leaf.

Studies have indicated that the leaves are inefficient at capturing prey and that only about 1 percent of the visiting creatures become victims. There is even one nonbiting mosquito that safely lives and breeds only in the pitcher-plant leaves!

Color variations of the pitcher plant’s leaves depend on where they’re growing. Those in more shady environments have greener leaves; those growing in full sun have more red in the pitchers. The red color helps to block harmful sun rays, providing protection similar to what sunscreen affords humans.

Two other carnivorous plants native to The Ridges Sanctuary are round-leaved sundew and bladderwort. There are two species of yellow-flowered bladderworts, both in the genus Utricularia. One grows in wet sand and the other in small ponds. Each species is rootless but has branched stems up to three feet long that bear many much-divided leaves. Hundreds of tiny bladders on the submerged leaves capture microscopic pond life.

Several trigger hairs are situated around the mouthlike opening to each bladder. Exceptionally small creatures such as protozoans, larvae, crustaceans and worms accidentally trip the trigger hairs, which causes the bladder to suddenly expand, syringe-like, and draw the helpless victims into the bladder trap to be digested.

Round-leaved sundew, Drosera rotundifolia, is a small, native plant that has a basal rosette of leaves with reddish upper surfaces covered by long, sticky, glandular hairs. Insects land on this attractive surface, only to be stuck to the hairs. Slowly the leaf envelops the insect, digests the nutrients, then dries out and releases the exoskeleton. The sticky liquid is replenished to start the meal all over again.

Here’s hoping you will enjoy seeing – but not be trapped by – the pitcher plants of The Ridges Sanctuary.